Psych professor Martin Seligman never condoned the use of his research in military torture - quite the opposite.
06/19/08 5:00am

Josh Stanfield | How it used to be

There are few people more knowledgeable when it comes to keeping a pulse on the Philadelphia sports scene than Big 5 mainstay and Saint Joseph's head basketball coach Phil Martelli. Born in Media, Pa., Martelli grew up with the City Series in his backyard and has been with the Hawks for 22 years.
11/19/07 5:00am

He hadn't taken a kick in practice all season. So when coach Al Bagnoli called on Derek Zoch to kick the extra point after the Quakers' final touchdown on Saturday, the senior kicker was more than a little surprised to hear his name. "I was caught completely off guard," Zoch said.
11/16/07 5:00am

It was already a busy week for Cornell wide receiver Shane Kilcoyne. With exams and a game against Dartmouth coming up that Saturday in late October, the last thing Kilcoyne expected was the news that raging wildfires had come within five miles of engulfing his home in San Diego. 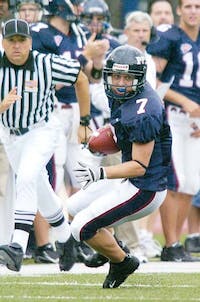 Carre's Monarchs anything but regal

It wasn't a smooth transition from the field to the sidelines.Former Penn wide receiver Matt Carre's first season as a coach was rough. But even after starting the season 0-9, Carre tried to stay positive as he took the field as King's College intern assistant coach for the team's final game of the year last Saturday. 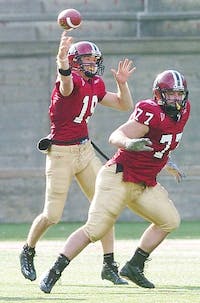 BOSTON, Nov. 10 - There is only one game left in the football season, but the pieces have yet to come together for Penn's offense. The Quakers went a staggering 0-for-14 on third down in the second half of its 23-7 loss at Harvard on Saturday, and struggled to find the end zone despite fantastic field position.
11/09/07 5:00am

At 13 years of age, Conor Turley's journey seemed to have come to an end. Instead of enjoying his last year of middle school, Turley spent most of eighth grade in the hospital battling polyarteritis nodosa, a life-threatening disease that occurs when immune cells attack the arteries for unknown reasons.

Acquittal for the defense

After losing so many close games despite playing solid football, the Penn defense was fed up. In a grueling battle which saw both offenses struggle to find their rhythm, the Quakers' defense finally took control and delivered a win, shutting out Princeton, 7-0, at Franklin Field on Saturday.

Football: Who says it doesn't matter?

Even 12 months after last year's double-overtime battle that ended with Princeton ahead by one, Penn captain Joe Anastasio still remembers the defeat like it was yesterday. "It definitely burns us," the senior linebacker said. "We wanted it a lot emotionally and it's definitely sticking out in our minds going into this weekend.
11/02/07 5:00am

After losing so many close games despite playing great football, the Penn defense was fed up. But after a grueling battle with both offenses struggling to find their rhythm, the Quakers' defense finally took control and delivered a win, shutting out Princeton, 7-0, at Franklin Field on Saturday.
10/26/07 5:00am

Brown Opponent Spotlight: A strange day in the Anastasio household

After spending the majority of high school playing on the same football team as his brother, Nick Anastasio wanted a change of pace. So when both Penn and Brown recruited him heavily in his senior year, Anastasio decided against joining his older brother Joe on the Quakers, and cleared a path for himself instead.
10/25/07 5:00am

Bracketology, served on the Main Line with no M.D.

His nearly flawless brackets over the years have earned him the title Doctor of Bracketology, but at the end of the day ESPN bracketologist and Saint Joseph's communications guru Joe Lunardi is more or less an ordinary guy. Just ask his six-year-old daughter, whose selections beat her dad's last year when she picked bracket-busting Butler because she thought butlers look like penguins, and she likes penguins.

Penn unloaded an offensive onslaught on the hapless Hoyas, scoring five touchdowns before halftime with an ease that senior quarterback Bryan Walker credited to the offensive line setting the tempo and keeping the Georgetown pass-rush in check.
10/08/07 5:00am

It's official. The first 'W' is finally in the books for the Quakers. Penn's offense finally came together against Georgetown, converting on red-zone opportunities and snatching points turned down in games one through three. "It's something we needed to experience again," senior quarterback Bryan Walker said of the win.
10/05/07 5:00am

Football: Why are we playing Georgetown?

After their last meeting ended with a 0-0 tie in 1937, fans should hope the Penn-Georgetown matchup is something that gets better with age. The Quakers swapped Bucknell for Georgetown on the schedule this year after a seven-decade hiatus from playing the Hoyas, and it isn't hard to see why Washington D. 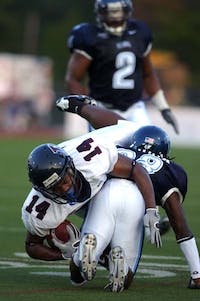 Nowhere To Go But Up

Braden Lepisto is sick and tired of losing. "I don't even remember what it feels like to win," the senior wide receiver said. With Penn dropping seven of its last eight contests dating back to last year, the team's frustration is palpable heading into tomorrow's game against a just-as-winless Georgetown squad.
09/28/07 5:00am

Dartmouth Opponent Spotlight: 3,000 miles to Hanover for the war on cancer

After the last day of spring football practice, most coaches and players take it easy. Dartmouth coach Buddy Teevens took a plane from Hanover, N.H., to San Diego and started a three-week scenic tour across America back to Hanover on his bicycle. After seeing the toll cancer had taken on his family and friends, the 50-year-old coach set out with a goal of promoting cancer awareness.

By the end of the night, the Penn quarterback combination of Robert Irvin and Bryan Walker had thrown a total of seven interceptions to hand Villanova a 34-14 win, their seventh in a row in this series.
09/21/07 5:00am

Villanova Opponent Spotlight: Young is in; Burroughs is out. or is he?

When Villanova quarterback Marvin Burroughs graduated last spring, Wildcats fans probably thought they had seen the last of the veteran that carried the offense for three years. But the familiar face has been in the crowd at the home games so far, watching his successor, sophomore quarterback Antwon Young, who has been like a younger brother to him.
More Articles