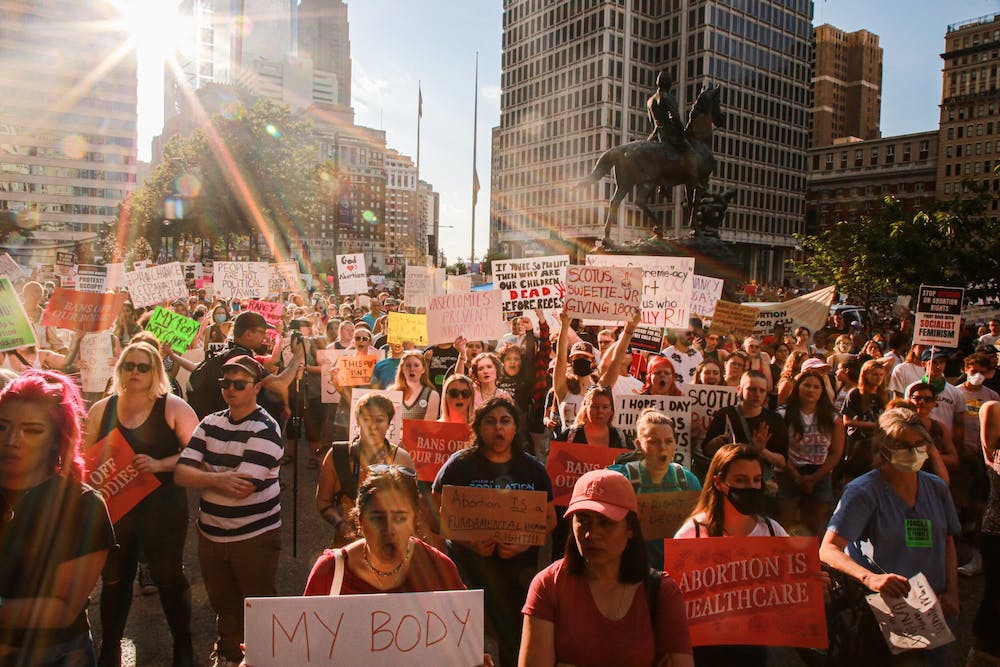 Thousands of Philadelphians gathered in front of City Hall Friday to protest the Supreme Court’s overturn of Roe v. Wade, ending the constitutional protection to the right of abortion. While Pennsylvanians will still be able to access abortion facilities, the ripple of those who lost this ability was certainly felt in Philadelphia. The ruling also came at a time when the future of abortion rights in Pennsylvania will be decided in November as Republican nominee for governor Doug Mastriano does not support abortion rights, while Democratic nominee for governor Josh Shapiro does. With chanting, tears, and a great deal of emotions in the air, here’s a look into Friday's protest.

Friday's decision was emotional for many as the air was filled with anger, disappointment, and sadness.

Protesters highlight the Supreme Court justices who voted in favor of the decision.

Céshia Elmore, a community organizer for New Voices of Reproductive Justice, talked about how the Supreme Court ruling specifically affects women of color. “Body terrorism has been used to concentrate wealth and power of the ruling class using the policies of oppression for Black and indigenous people. This is a reality we have always known for hundreds of years. We must acknowledge the past that many are afraid of is actually the present,” Elmore said.

Many regarded the ruling as a step backward, underlining that their grandparents’ reproductive freedom were protected while theirs are presently under attack.

The decision also came at a time when issues of LGBTQ rights, gun violence, and partisanship are intersecting with each other.

Rising College junior Sarah Sterinbach (right) felt “angry, kind of hopeless but also not wanting to lose hope because I know there is work to be done.”

“I don’t think that the anger and disappointment we feel should stay here and stay in today. I think that it needs to persist and I don't think this is something we should forget about tonight when we leave or tomorrow,” said  rising Nursing junior Mari Andrzejewski.

Andrzejewski also highlighted WOAR, Philadelphia’s only sexual assault crisis hotline which she is a worker at. “I feel like it’s going to be harder at this time for voices to speak out, so it’s really important you know these resources,” she added.

In his concurring opinion, Justice Clarence Thomas argued that other Supreme Court decisions — Griswold v. Connecticut, Lawrence v. Texas, and Obergefell v. Hodges — protecting an individual's right to obtain contraceptives, right to engage in private sexual acts, and right to same-sex marriage, respectively, should be reconsidered. Protesters underlined the dangerous precedent that the overturn of Roe could create and its far-reaching implications with other issues.

Former White House Homeland Security Advisor to Mike Pence and 1999 College graduate Olivia Troye wrote in a tweet today: “I’m on a train right now & the number of women who have tears in their eyes, including myself, is something I’m going to remember for the rest of my life.”

Wellness at Penn and Penn’s Center for Public Health Initiatives released a statement on Friday, saying “we understand and acknowledge the radical policy implications of this announcement, and the fear and anxiety generated as a result … the Penn public health community will continue to educate and promote access to comprehensive and safe reproductive care.”