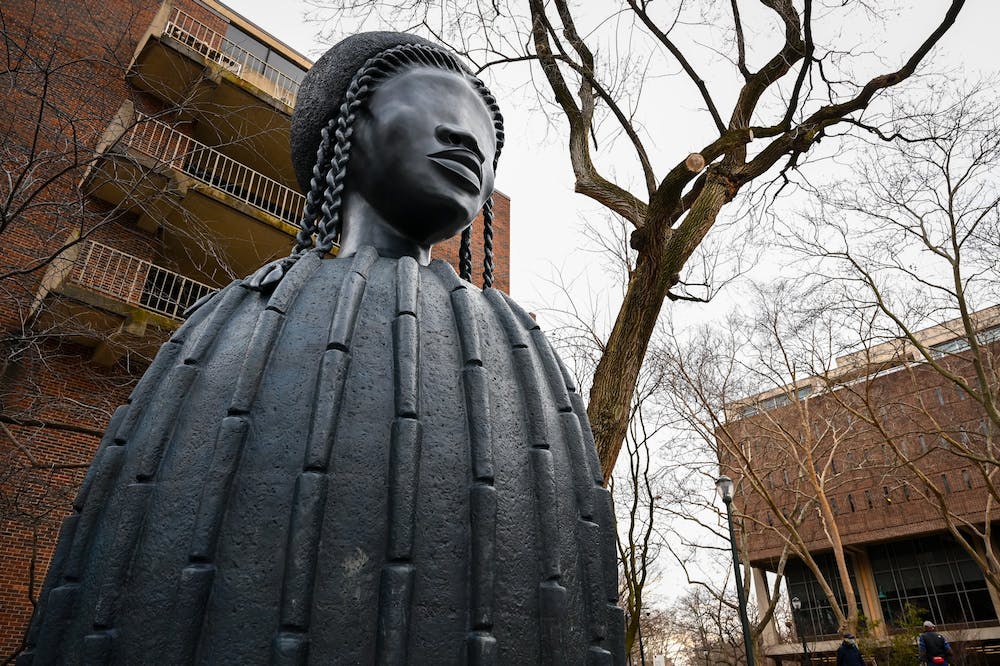 Brick House (2019) by Simone Leigh stands at the start of Locust Walk on 34th and Walnut streets.
Credit: KYLIE COOPER
PHOTO ESSAY
Photo Essay | Always seen, but what do they mean? The stories of 11 iconic campus sculptures
By MAX MESTER 02/17/21 9:02pm

Penn's campus is enriched at every corner by illustrious works of art. While these installations serve the practical purpose of convenient meeting locations for students, many of them also have intriguing backgrounds and unbeknownst meanings. From looming statues to intricate gates, here are 11 statues that bring campus to life.

Brick House (2019) by Simone Leigh, Penn's latest statue upon being installed in Nov. 2020, stands at the start of Locust Walk on 34th and Walnut streets. Leigh's five-ton, 16-feet-tall work draws inspiration from the African diaspora and features cowrie shells on the woman’s braids, which symbolize wealth, femininity, and the African slave trade in which the shells were used as currency.

Covenant (1974) by Alexander Liberman stretches over Locust Walk, though is more commonly referred to by students as the "Dueling Tampons." Drawing from his Jewish roots, Liberman "hoped to create a 'feeling of bonding together for a higher purpose,'" according to Penn's Digital Art Collection. The sculpture was erected as part of Philadelphia's “One Percent for Art” legislation, which required one percent of the city's construction to be used on public art installations.

Social Consciousness (1954) by Jacob Epstein is located next to Van Pelt Library. The elaborate statue was previously housed in the Philadelphia Museum of Art before being relocated to Penn's campus in 2019. The figure on the left represents Compassion, on the right stands Death, and between rests the Eternal Mother. Epstein's work is a commentary on the sympathy, tenderness, and affliction of humanity.

Quadrature #1 (1977) by Robert Engman can be found at the end of Hamilton Walk in T.G. Miller Plaza. This is one of three of Engman's works featured on Penn's campus. Engman, a former Penn professor who taught sculpting, often incorporates mathematic principles into his pieces.

Split Button (1981) by Swedish sculptor Claes Oldenberg rests between Van Pelt Library and College Hall. Legend has it that a button fell off of Benjamin Franklin's vest, split in half, rolled across Locust Walk, and became enlarged upon coming to a stop in front of Van Pelt Library.

Life Savers (1982) by Billie Lawless is located at 38th and Spruce streets. The sculpture was gifted to Penn by local philanthropists Philip and Muriel Berman.

The Kelly Family Gates (2003) by Mark Lueders serves as the entranceway to the Charles Addams Fine Arts Hall — named after the creator of the "Addams Family" series, who attended Penn for the 1930-1931 school year. Lueders, who received his MFA from Penn in 1993, won a contest in 2003 for the gates' design, fittingly incorporating various artistic imageries and mediums for the School of Fine Arts. The hands not only represent creativity, but are also a nod to the "Addams Family" character Thing, which is a disembodied hand.

Love (1966) by Robert Indiana stands in Blanche Levy Park at the east end of Locust Walk. Indiana created several Love statues between 1966 and 1998 that can be found across the globe. Philadelphia's most notable Love statue is located in John F. Kennedy Plaza in Center City, which is more commonly known as Love Park.

Peace Symbol (1967), another work by Robert Engman featured on Penn's campus, is situated close to Van Pelt Library. This sculpture memorializes the victims of the Vietnam War, which the Penn community often demonstrated against in the 1970s.

Black Forest (1977), designed by 1963 School of Fine Arts graduate Robinson Fredenthal, stands adjacent to College Hall. Fredenthal turned from architecture to geometric sculptures after the onset of his Parkinson's disease at the age of 24.

Charles Curtis Harrison (1925) by Frank Lynn Jenkins is centered amidst the Fisher-Hassenfield building within the Quadrangle. A Philadelphia native, Harrison received his Bachelor of Arts from the University in 1862, a Masters of Arts in 1865, and an honorary LL.D. in 1911. He also served as Penn's provost from 1894-1910, and later as the university's vice president and on the board of managers of the University Museum.