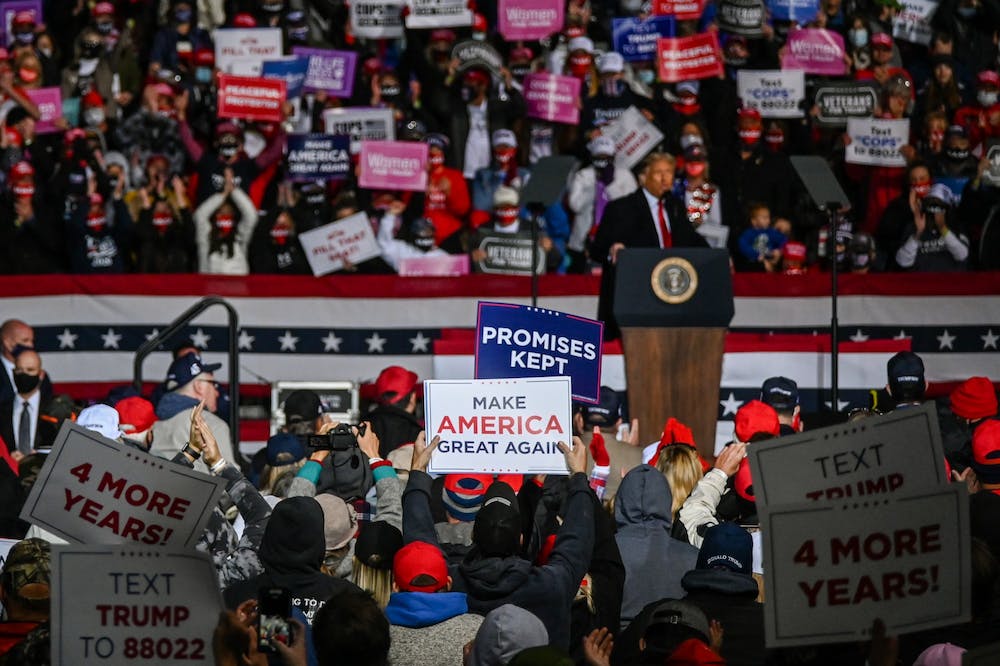 A sea of red, white, and blue surrounded President Donald Trump as he spoke at the Make America Great Again rally in Johnstown, Pa.

Last Tuesday, thousands of MAGA hat-clad Pennsylvanians of all ages — many of whom opted not to wear face masks —  descended upon John Murtha Johnstown-Cambria County Airport in Johnstown, Pa. — a secluded town of less than 20,000. They came for the "the Trump experience," as many of them told The Daily Pennsylvanian, and the 1968 Wharton graduate did not disappoint.

Though Trump's speech — in which he warned the crowd that former Vice President and Penn Presidential Professor of Practice Joe Biden is too old to lead and that he would take away their guns and prioritize Chinese interests — lasted only about an hour, the Trump experience was an all-day affair.

Here are the sights and scenes leading up to and throughout President Trump's Johnstown, Pa. rally.

Many attendees arrived to the rally on school buses, all of which were driven by fellow supporters. The Johnstown event marked Trump's second rally since his COVID-19 diagnosis.

As people filed off the buses and approached a tent to get their entry passes, a volunteer offered masks to those who weren't wearing one. Masks, however, were not required at the rally.

Under the entrance tent, a campaign worker checked each attendee's temperature with a non-contact thermometer.

A truck with a model of Trump's head inside a box reading "QUARANTINE" and two "Ridin' with Biden 2020" flags drove back and forth repetitively past the queue of supporters waiting for the airfield gates to open, prompting boos and jeers each and every time.

A volunteer handed out water bottles to supporters as they flowed into the seating area beginning at 4 p.m. EDT.

Three bleachers were set up behind the stage, one propping up a large "Make America Great Again" sign.

A child dressed as Trump garnered the attention of many supporters on the airfield.

Supporters stood for the National Anthem, many bearing American flags on the sleeves of their red Trump 2020 t-shirts.

Secret Service agents were stationed outside and throughout the event space even hours before the president's arrival.

While the sun set, a Secret Service agent wiped down the handrails of the staircase that Trump would soon walk down.

Trump stepped off Air Force One at 7:31 p.m. — 31 minutes later than originally scheduled — electrifying the thousands of supporters, many of whom had been waiting for 10 or more hours. Trump waved to the crowd as Creedence Clearwater Revival's "Fortunate Son" played. The flight had taken off from Washington, D.C. at around 6:43 p.m.

As Trump made his way to the podium, he threw MAGA face masks into the crowd.

Attendees lifted signs high into the air, the messages reading "4 more years," "This is a peaceful protest," "Women for Trump," and other phases of support.

Throughout his speech, Trump made reference to Biden's age and "lack of mental stability," going so far as to imitate him multiple times.

On his way back to Air Force One, Trump walked among the ever-enthused supporters. He boarded the plane at 8:44 p.m., leaving the airbase with one final wave.