Titus Adkins | Home is where the hatred is

Dear Amy Gutmann, Vincent Price, Valarie Swain-Cade McCoullum and Monica Yant Kinney, I, as a black student, do not feel safe on this campus. In light of all of the violence that has and continues to occur to black and brown bodies in this country, I have one question for you all: Is it so difficult to, at the very least, write a letter speaking out against the genocide that is occurring across this nation? It’s perplexing to me that you choose to remain silent, as approximately 7 percent of your student body, a 7 percent which I am a part of, grieves and mourns the lives of those with our same complexion.
09/24/16 1:29pm

GROUP THINK is the DP’s round table section, where we throw a question at the columnists and see what answers stick.

Alec, before I begin I’d like to say that this is not an attack on you, but on your harmful and racist views.

Titus Adkins | There is nothing 'just' about being black, part I: History

I am not Caribbean-American. I have no traceable African roots; all I know is that my predecessors probably resided somewhere in West Africa. My ancestors were some of the first slaves to come over on the slave ships.

Titus Adkins | Loving to hate: The detriments of schadenfreude

Have you ever felt joy as a reaction to the misfortune or lack of achievement of another? If so, it’s okay you’re not alone.

On college campuses these days diversity is a coveted buzzword for the publicity of the respective institution. 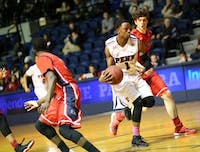 Penn basketball will look for its first win on Saturday, so we decided to look at three keys to victory for the Red and Blue against Lafayette.

Penn men's swimming attempting to bounce back against Princeton, Cornell

Penn men’s swimming is looking to show its resilience on Friday as it heads to Princeton for the first conference tri-meet of the season. 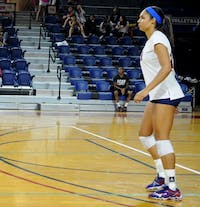 Every season has its ups and downs, but junior setter / right-side hitter Alex Caldwell has been a beacon of consistency for Penn volleyball.

With fall sports coming to an end, Penn fencing is ready to prove why it should not be overlooked.

Penn volleyball gets outlasted by Harvard on Senior Night

After matchup with Dartmouth on Friday night that saw Penn handle its Ivy League foe in three sets, the Red and Blue were primed for a matchup against first place Harvard. Despite a strong effort, though, the Quakers fell in five sets.
11/07/14 9:59pm

Senior weekend started out well for Penn volleyball. The Quakers strung together consecutive Ivy wins for the first time this season as the Red and Blue took down the Dartmouth in straight sets, 25-22, 25-16, 25-21. In the first set, Penn (5-6) leapt to a lead.

Penn volleyball and the state of the Ivy League

The recent rise of play within the Ivy League has been a swift one. With schools scrambling to get the one or two pieces to complete their Ivy League title puzzles, competition for recruits has never been so high. 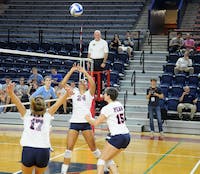 With three games of their Ivy League season in the books, Penn will have their hands full this weekend as they face Yale and Brown. 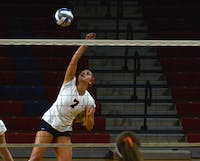 With last weekend behind them, the Red and Blue look now to face the Lions for their first win in Ivy League play. Though conference games just started and Quaker confidence is still high, an 0-2 Ivy record for Penn would not bode well. 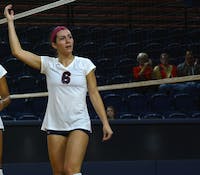 We sat down with Penn volleyball junior setter Ronnie Bither for a 30 seconds with...

Penn volleyball looks beyond the numbers

Some say numbers never lie, but Penn volleyball may disagree.

Penn volleyball to wrap up nonconference play in Big 5 Tournament

The Quakers have one week until they open Ivy League play against Princeton, but this weekend, they face Villanova, La Salle and Temple in the Big 5 Volleyball Tournament at the Palestra. 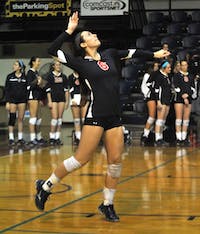 Penn volleyball to give the west its very best shot

A few short days after a tough nonconference loss to Delaware, Penn volleyball will get a shot at No. 1.

On the first stop of their four-match road trip the Red and Blue (2-2) were beat down by Delaware (5-3) in three straight sets.
More Articles

Despite the recent struggles of Penn Football’s 2014 campaign, with Brown in town this weekend ...
More Posts