Penn Relays Issue: Looking back at the 2014 Relays

The 2014 Penn Relays had everything you could ask for: dramatic finishes, record setting performances and a number of impressive victories by the hosts.

The stakes are rising for Penn women’s lacrosse. Winners of eight consecutive Ivy League regular season titles, the resilient Quakers will face Princeton on Wednesday in a battle of Ivy League unbeatens, one that will likely determine the host of next month's Ivy League Tournament.

In search of a signature nonconference win against No. 6 Northwestern, No. 11 Penn women’s lacrosse encountered a painfully familiar result. After trailing by as many as four in the first half, the Red and Blue could not capitalize on an epic comeback, falling to the Wildcats, 9-8, in overtime on Sunday, marking the squad’s ninth consecutive loss to Northwestern. Junior midfield Kaleigh Craig scored the winner for Northwestern (8-3) with 13 seconds remaining in overtime to hand Penn (9-2) its second loss of the season, both against teams ranked in the top six.

The Red and Blue held off Dartmouth, 58-51, on Friday night at the Palestra to mark their second-straight tight victory.

With Ivy League play looming, the Quakers (4-9, 0-1 Ivy) look to continue their success against MAAC teams - they are 2-1 this season with wins over Marist and Niagara - with Wednesday's game against Monmouth (9-9). 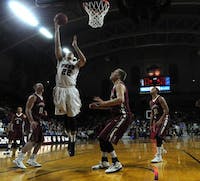 Against a more experienced and talented Lafayette squad that was hot from the start, Penn made an impressive comeback effort that put its full potential on display despite ultimately falling short, 83-77.

Powers | A performance to be proud of for Penn football

It sure would have been nice to send off the program’s winningest coach with another victory in his final game at Franklin Field, but Penn football showed a lot to be proud of in its loss to Harvard.
11/13/14 8:43pm

While Saturday will be all about Al Bagnoli, who will be coaching for the last time at Franklin field, the coach on the opposite sideline deserves his fair share of recognition. 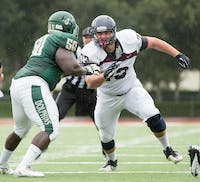 Penn football heads to Princeton with upset on its mind

With disappointment swirling around Penn football and its conference record, the squad has upset on its collective mind.

Alex Tirapelle, the new head of Penn’s wrestling program, won’t be turning any heads with his style of coaching.He wouldn’t have it any other way.

After a difficult start to the season, Penn football coach Al Bagnoli stressed the need for his team to get back to the fundamentals.

After a slow start, the Quakers dominated visiting Columbia 31-7 with their most complete offensive effort of the season. 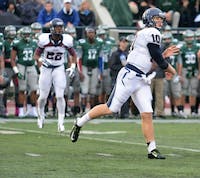 Penn football looks for steady footing on the road at Fordham

Seeking to avoid an 0-4 start for the first time since 2007, the Quakers (0-3) do not get an appealing confidence building opportunity as the heart of the Ivy slate nears, but rather a high powered Rams (5-1) squad that will look to aggressively attack Penn’s defense. 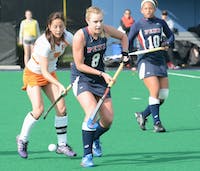 Penn field hockey, which last defeated Lafayette in 2007, submitted a strong comeback effort on the shoulders of senior Emily Corcoran to topple the Leopards, 4-2, Wednesday evening.

Penn football’s season is set to lift off this weekend in Jacksonville, and while all the attention will be on whether new starting quarterback Alek Torgerson can lead a bounce-back campaign for the Quakers, the tireless efforts of the program’s operational staff to make the trip a possibility will go more or less unrecognized.

After a solid opening weekend at Vagelos Field, Penn field hockey will look to use two more nonconference games to shape into form ahead of Ivy play.

The follow-up to a thrilling campaign that fell just short of an Ivy League title begins Friday for Penn Field Hockey, who will face Lehigh (0-2) at Ellen Vagelos field. 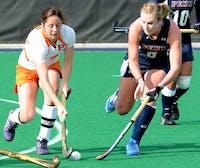 It's Emily Corcoran on the attack again for Penn field hockey

Penn field hockey may have lost a lot of talent over the summer, but with senior attack Emily Corcoran returning, the Quakers still have hope to compete for an Ivy League championship.
More Articles