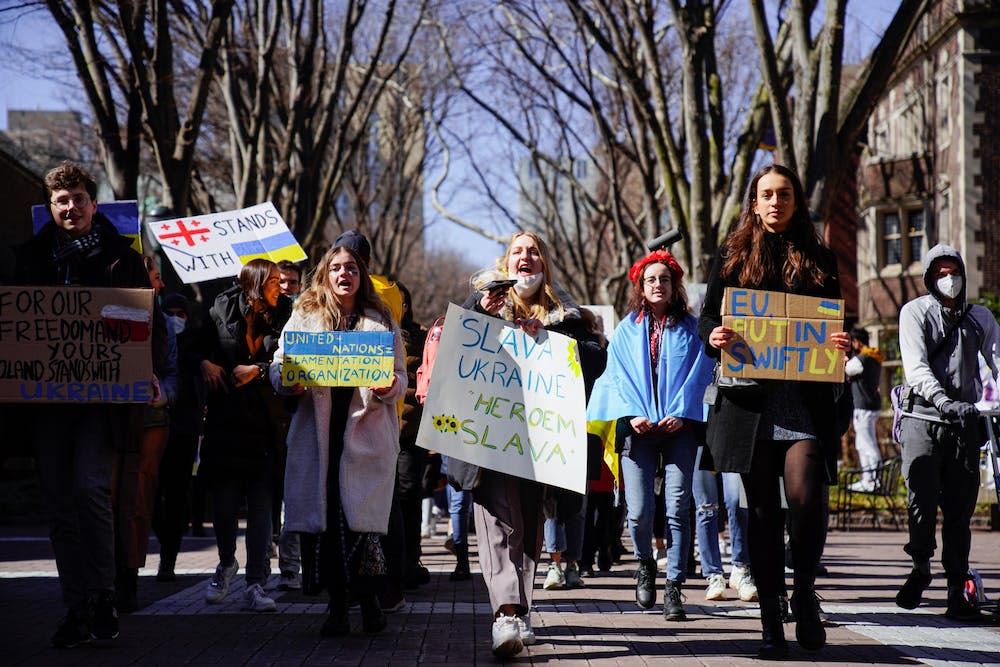 Today, students from Penn and Drexel, as well as members of the Philadelphia community, gathered in front of College Hall to stand in solidarity with the Ukrainian people. Though the armed conflict is on another side of the globe, the Penn community certainly felt its ripple. With the crowd passionately chanting, banners flying, and the Ukrainian national anthem echoing in the wind, here’s a look into today’s march in solidarity with Ukraine.

Penn and Drexel students and community members gathered at the Compass at noon carrying protest signs and Ukrainian flags as they began their march on Locust Walk.

The salute, "slava Ukraini," resonated in the air as protestors chanted and made their way down to College Green.

Protestors amassed by the statue of Benjamin Franklin as they attentively watched the speakers of the day.

One of the speakers was Rymma Mylenkova, a Fulbright research scholar at Penn's Stuart Weitzman School of Design, who called on Russian soldiers to stop the violence and return to their families.

Many students of eastern European origin and descent also participated in the protest to demonstrate solidarity with the Ukrainian people.

The air was full of strength and solidarity.

Though the atmosphere was also at times permeated with contemplation, frustration, anger for the situation in Ukraine.

Fulbright Scholar studying physics Mykola Stetsko reminded the crowd that Ukrainians are not fighting for their own freedom, but to preserve democracy worldwide.

The protest ended with the singing of the Ukrainian national anthem.