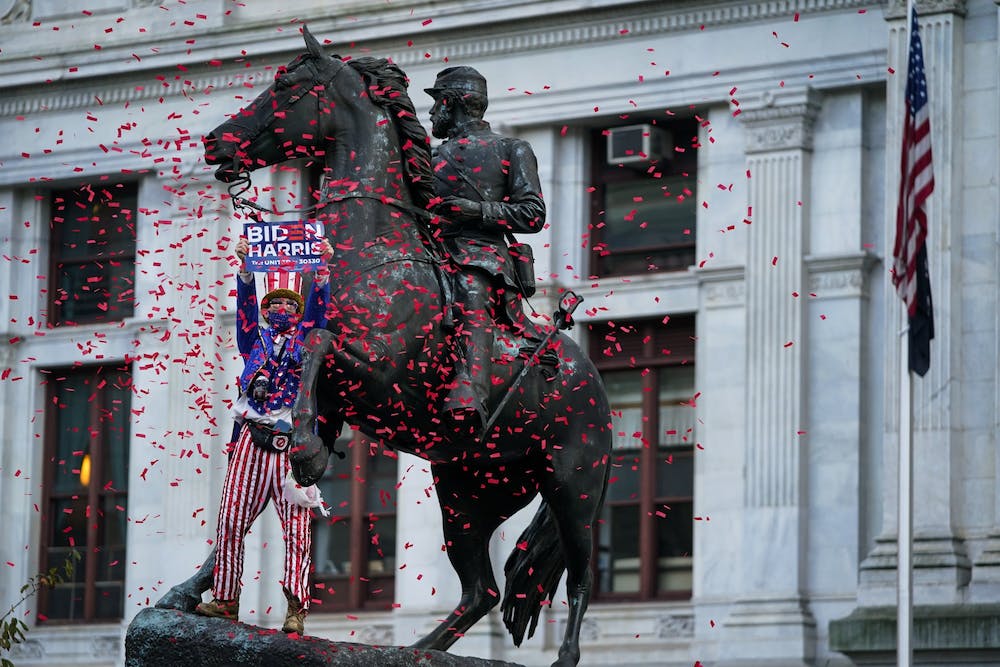 It had been four days since Election Day, and it was still unclear who the 46th President of the United States would be. Votes continued to slowly roll in from the few states that had not decided yet, and an anxious nation was desperate for the race to be called. But late on Saturday morning, major news networks began to project former Penn Presidential Professor of Practice Joe Biden as the winner of the state of Pennsylvania, pushing him beyond the threshold of 270 electoral votes to secure the presidency.

The days following the pandemic-altered Election Day were dominated by "Count Every Vote" protests in Center City as Trump's campaign claimed, without evidence, that there was widespread election fraud and that Democrats were trying to "steal the election." Outside the Pennsylvania Convention Center, where Philadelphia County's votes were being tallied, there had been a several-day face-off between the Count Every Vote group and a group of Trump supporters. But Saturday's announcement quickly turned the city from tense to joyous.

Even as COVID-19 cases surge across the nation, Penn students joined thousands of elated Philadelphians to dance, drink, and cheer in the streets. This is how Philadelphia celebrated the Biden-Harris win after the news broke.

Minutes after it was announced that Biden was the projected winner, people started to leave their homes and rush to the streets. Two friends danced at Independence Mall, where a demonstration to count every vote had already been scheduled to start at noon.

Community faith leaders spoke during the event at Independence Mall. One speaker asked everyone to raise their right fists into the air in remembrance of Walter Wallace Jr., a West Philadelphia resident who was fatally shot by police on Oct. 26.

The number of people at Independence Mall grew very quickly, spilling onto the street and blocking traffic.

Third-year Social Policy and Practice graduate student Sonia Adamson raised an United States of America flag and shook a tambourine as the group celebrating at City Hall marched to join the crowd at Independence Mall.

The crowd extended across the lawn of Independence Mall, some choosing to sit socially distanced closer to the National Constitution Center.

Philadelphia Mayor Jim Kenney came to speak during the celebrations. "We can't gloat too much, since we have to bring the country back together," Kenney said.

Flags were ever-present around the city. While American flags were the most popular, one supporter combined a Biden-Harris flag with the Puerto Rican flag.

Some demonstrators took to the streets with a giant man-made eagle, whose wings could flap up and down.

Members of the Sunrise Movement held a large banner demanding the Green New Deal as the group of thousands marched from Independence Mall back to City Hall.

As people marched through the streets, onlookers dining outdoors jumped and cheered along with the crowd.

Philadelphia City Councilmember and 1993 College graduate Helen Gym was at the front of the march, holding a banner and chanting along with her fellow Philadelphians.

People had been celebrating for over four hours when the march reached City Hall. The energy was just as high as when Biden and Harris's victory was first announced.

Girls Rock Philly Program Director and activist Samantha Rise addressed the crowd of protesters in front of City Hall, reminding them of the power of democracy to bring positive change and that Philly has work to do to help uplift the Black community further.

Love was in the air throughout the day. While speeches were being given at City Hall, a couple kissed and embraced.

Several college students danced to upbeat music after the speeches concluded and drank champagne in celebration.

A group circled around a Trump punching bag that people took turns hitting and kicking.

Friends popped a champagne bottle in front of City Hall as the Center City festivities came to a close.

Although the crowds diminished as the day wore on, the mood in the city continued to be joyous well into the night. Fireworks were set off on 42nd and Locust Streets — very close to Penn's campus — just after 9 p.m.