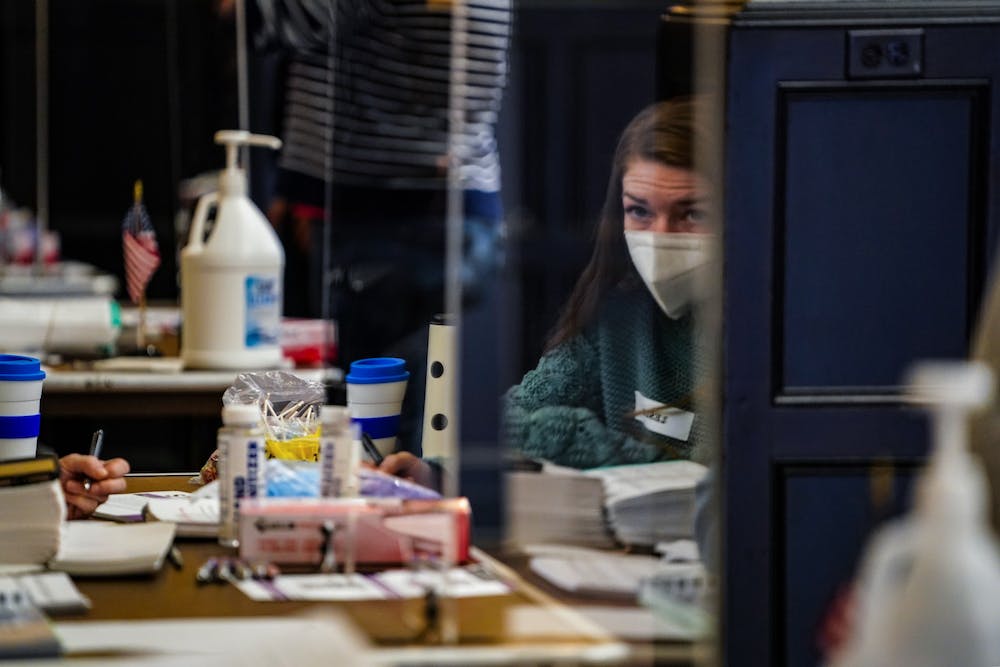 A poll worker, reflected in plexiglass, inside the Houston Hall polling site on Election Day.

Credit: CHASE SUTTON
PHOTO ESSAY
Photo Essay | Scenes from a pandemic-altered Election Day in Phila., and its tense aftermath
By CHASE SUTTON and SUKHMANI KAUR 11/05/20 3:21am

The 2020 election — shaped by the COVID-19 pandemic and a reckoning over racial injustice and police brutality against the Black community  — looked notably different on Penn's campus compared to previous years. The battleground state of Pennsylvania could be a key decider in calling this election. President and 1968 Wharton graduate Donald Trump and former Vice President and Presidential Professor of Practice Joe Biden currently await the electoral results as several states, including Pennsylvania, rush to finish counting ballots.

Despite a completely remote fall semester, members of the Penn and nearby Philadelphia community masked up and voted in person on campus, abiding by social distancing guidelines at Houston Hall, ARCH, and Walnut Street West Library. Nearly 700 ballots were cast at the three campus polling sites, 83% of which were in favor of Democratic nominee Joe Biden.

The Daily Pennsylvanian sent a team of photographers to capture this unique election week. Here's how it has unfolded so far.

A line of nearly 150 socially distant and masked voters formed outside of the Houston Hall voting site ahead of the 7 a.m. opening of the polls. The line grew to 200 soon after, reaching the outskirts of Locust Walk at around 8 a.m.

Inside of Houston Hall, student and adult poll workers guided people through the voting process. This year, students stepped up and served as volunteers at polling sites in lieu of the elderly, who feared the risk of COVID-19 as the demographic most vulnerable to the disease.

College junior Sneha Ravi (left) and Bonnie Stright, a first-year student at the School of Social Policy and Practice (right) offered signs to nearby voters on Locust Walk. Ravi volunteered for the Biden-Harris campaign because her values on improving climate change coincided with the campaign's visions.

President Amy Gutmann and her husband Michael Doyle cast their ballots at Houston Hall at around 9:30 a.m. on Tuesday morning. Before voting, Gutmann stressed to the DP the importance for the Penn community to vote "given the pandemic, given the fight against racism, and given that Philadelphia is the birthplace of freedom and justice."

Outside of the Houston Hall polling site, volunteers from the Election Defenders offered free food and refreshments and encouraged voters to engage more of the community to fulfill their civic duty.

College junior Jaden Cloobeck (left) and College senior Anna Lisa Lowenstein (right) tabled outside of ARCH and directed students and staff to the polling site on behalf of Penn Leads the Vote, a student non-partisan organization that increases voter engagement at Penn.

Wharton senior Rachel Meierovich was among numerous voters who cast their first ballot in a presidential election. Meierovich was partially inspired to vote because this year marks the 100th anniversary of the passage of the 19th Amendment, which gave women the right to vote.

The afternoon marked a stark difference from the morning with fewer voters waiting to vote outside ARCH, one of the three campus polling sites.

Many Penn students traveled to their hometowns to vote, but for some, Philadelphia is home. A Pizza to the Polls food truck in Center City offered free snacks and pizza to voters. On Nov. 3, the food truck delivered 66,000 pizzas and nearly 698,000 snacks to the polls nationwide.

A few voters stood outside the ARCH voting location before the polls were set to close at 8 p.m. in Pennsylvania. At 8:30 p.m., results were posted on the doors of all three campus polling locations with a clear triumph for Joe Biden, who captured 83% of the votes on campus.

Tuesday night turned to Wednesday morning, and there was still no clear winner.

A lot of eyes fixated on Pennsylvania on Wednesday, as millions of ballots still need to be counted in the potential deciding battleground state. A tweet from Trump's director of Election Day operations, Mike Roman, went viral after he falsely claimed pro-Trump poll watchers were being denied access to polling locations "all over the City."

The Trump campaign called an impromptu press conference in front of the Pennsylvania Convention Center on Wednesday afternoon, but it was quickly postponed and moved to a more remote area of the city due to safety concerns. During the press conference, Eric Trump, President Trump's son, accused Democrats of cheating in Pennsylvania, without evidence.

Police officers guarded the Pennsylvania Convention Center on 12th and Arch streets, where mail-in ballots continue to be counted.

Trump supporters waved flags outside the Convention Center in anticipation of the press conference.

A Trump supporter spoke to the media after it had been announced that the press conference was postponed. He said that Pennsylvania "is more red than I have seen in my entire life.”

At least a dozen National Guard members stood in front of the Municipal Services Building across from City Hall. The National Guard was deployed to Philadelphia following two nights of unrest in the city in response to the police killing of Walter Wallace Jr. at 61st and Locust streets on Oct. 26.

There were two Count Every Vote demonstrations in Center City on Wednesday. At the conclusion of the first protest, a demonstrator dressed as a cheerleader held up a sign advocating for the counting of all votes in Pennsylvania.

The second demonstration began outside City Hall at 5 p.m. After several speeches, the protesters began walking with their fists raised in solidarity with the Black Lives Matter movement.

Musicians from the West Philadelphia Orchestra joined the hundreds of demonstrators marching through the streets. The Count Every Vote protest joined with another demonstration on the south side of City Hall fighting for justice for Wallace Jr.

One of the leaders of the protest, YahNe Ndgo, led a chant as the group stopped at Independence Mall, yelling "say his name! Walter Wallace!"

Several people made speeches outside of Philadelphia Mayor Jim Kenney's apartment on 3rd and Race streets. The speakers called for the city to provide greater funding for community programs, or Kenney's resignation if that did not happen.

As a young child and his father left Wednesday evening's demonstration, there was still no clear victor in the presidential race. Wednesday has become Thursday, and the wait continues.