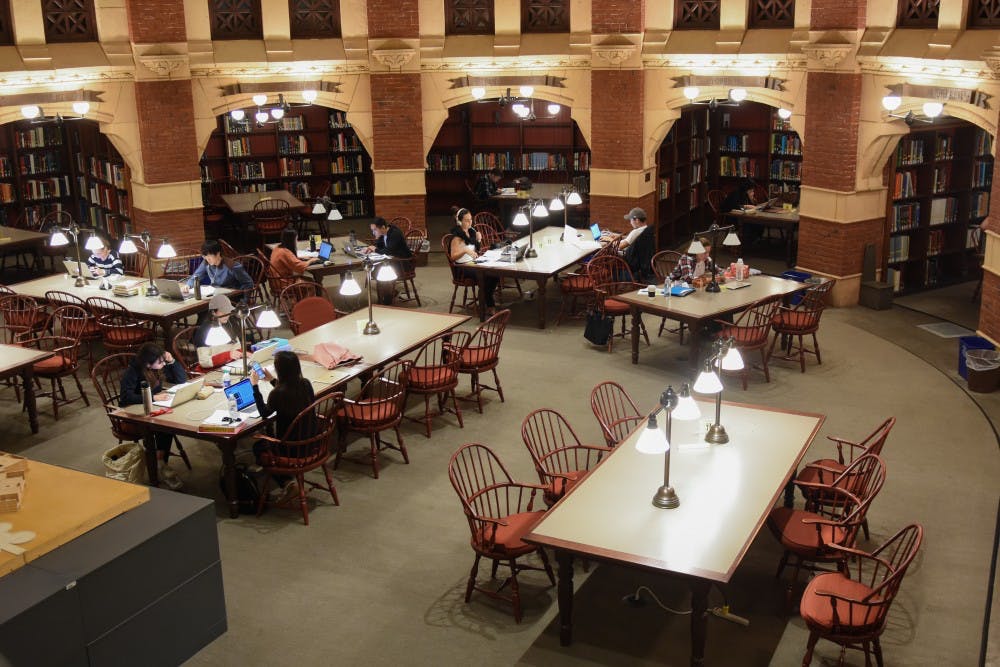 Credit: ANNIE LUO
PHOTO ESSAY
A look into some of the most beautiful places to study on Penn's campus
By SAM HOLLAND 10/28/18 7:25pm

The rooftop lounges of Rodin, Harrison, and Harnwell College Houses offer breathtaking views of Center City. The lounges are also used as event spaces – Sara Bareilles once held a concert in the Harnwell lounge. The buildings were designed by George Holmes Perkins, a former dean of the University of Pennsylvania School of Design, and opened to students in September 1970. All three high rises are open to all students with PennCards, but only residents of each building can swipe in after 2 a.m.

The Singh Center for Nanotechnology opened its doors in November 2013. Located on the east edge of campus at 32nd and Walnut streets, the building is a joint operation between the Arts and Science and Engineering schools and contains multiple study booths and tables throughout. Access is restricted to PennCard holders, who can swipe into the building until 7 p.m. on weekdays only.

The Biddle Law Library is located in Penn Law School's Tannenbaum Hall on Sansom Street. The library is accessible to University of Pennsylvania community members, Drexel law students and faculty, Penn Law alumni, and members of the bar association. However, access is limited to law students during reading days and finals.

United by Blue, a Philadelphia-based coffee shop and sustainable outdoor clothing company, is one of the over eight coffee shops on campus. The store's size tripled in 2017, adding more tables and a larger selection of its retail merchandise. In addition to its location at 3421 Walnut St., branches also exist in both Philadelphia's Old City and New York City. United by Blue is open until 7 p.m. every day.

The seventh floor of New College House houses a community kitchen and lounge for its residents to use. The space contains both high stools and lounge chairs and can be reserved by NCH residents. The kitchen opened with the rest of NCH in August 2016. Like the Penn's other College Houses, the buildings are accessible to PennCard holders, though only residents can enter after 2 a.m.

Fisher Fine Arts Library, Penn's first library, has been in operation since 1891. The Victorian building was designed by well-known architect Frank Furness and was designated a national historical landmark in 1985. Fisher is open until 12 a.m. Monday through Thursday and 10 p.m. on Friday and Saturday.

Fisher Fine Arts was Penn's only campus library until the 1962 opening of Van Pelt Library. Though the building's exterior has remained largely unchanged since its inauguration, a 2013 renovation of the sixth floor brought the Moelis Reading Terrace, a modern space with leather couches and large windows overlooking College Green. Van Pelt's sixth floor is open until 12 a.m. Monday through Thursday and 9 p.m. on Friday and Saturday.

The Moelis Family Grand Reading Room, also in Van Pelt, first opened at the end of the 2016-2017 school year. The silent study room includes a noise-absorbing wool and silk sculpture on one of its walls, fitting requests from students for a quiet study space in the library. Like the sixth floor, the reading room closes at 12 a.m. Monday through Thursday and 9 p.m. on Friday and Saturday. However, the ground floor Undergraduate Study Center is one of the last campus buildings to remain open 24 hours a day during the week.