In coming up with a concept for this column, I can easily say I rediscovered my deep admiration for the ability of every columnist I ever edited to come up with compelling topics on a regular basis.

On Friday, No. 10 Penn men’s lacrosse finished off its regular season at the Katie Samson Lacrosse Festival by defeating St. John's 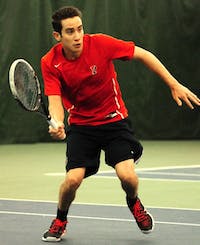 Over the weekend, Penn men’s tennis closed out its season with three matches over three days, losing to Columbia at home, and then beating Binghamton and losing to Cornell on the road. 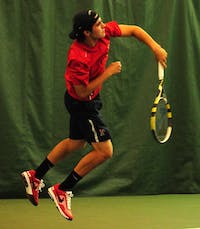 Coming from his hometown of Manlius, N.Y., Matt Nardella has made a big impact for Penn men's tennis in his freshman year, becoming a consistent part of the Quakers' top four slots. 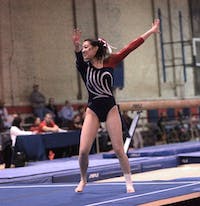 The USA Gymnastics Collegiate National Championships illustrated the ups and down of Penn gymnastics. 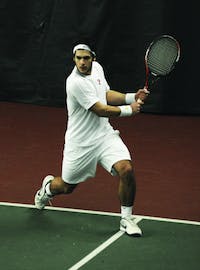 Penn men's tennis tries to make do despite injury bug

The injuries have piled up this year for the Quakers, a team that hoped to be ranked in the top 40 by the end of the season 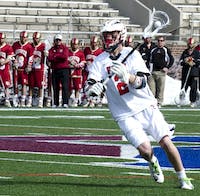 On Saturday afternoon, No. 15 Penn men’s lacrosse took down Brown, 10-8. The win marked the Red and Blue’s first home win against their foes from Providence, R.I. , since 2007. 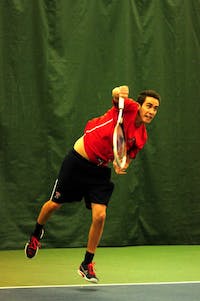 On Saturday afternoon, backed by a boisterous crowd, the Quakers took down No. 56 Princeton, 4-1, at the Levy Tennis Pavillion, after being forced inside due to the weather.
03/23/14 3:15am

The For the 24th consecutive time, the Quakers took down the Hoyas, led by former Penn coach Gordie Ernst, 4-3. The Quakers are now 30-1 all-time against Georgetown. 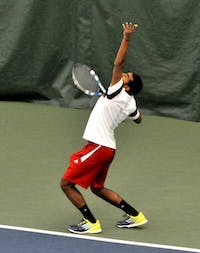 Some games are decided by just talent; others, by coaching too. Georgetown tennis coach Gordie Ernst hopes his squad’s upcoming match with Penn is defined by the former.
03/20/14 1:36pm

Last week, Penn (3-8) shipped out to California for the first time since the 2010-11 season for a four-game stint, finishing 1-3 through their first outdoor matches of the year.

Penn swimming ended the year diving into its best Ivy performance in recent memory. At the Ivy League Championships in Providence, the men’s team finished third, placing behind Harvard and Princeton
02/24/14 5:16pm

With a score of 190.15, the Quakers finished behind host Brown and Yale, but managed to edge out Cornell. After struggling to do so all season, the Red and Blue managed to top 190 for the third straight meet.
02/22/14 12:33am

I’d like to imagine a world where Penn coach Jerome Allen and Harvard coach Tommy Amaker switched jobs for the past two weeks, and then faced each other yesterday.Talent wise, Harvard and Penn aren’t so different - the Crimson have the edge, but not one that explains 20 and 30-point wins.
02/16/14 5:30pm

Penn gymnastics celebrated Valentine’s Day with a little heart both on and off the mat.On Sunday afternoon at Hutchinson Gymnasium, the Quakers scored a season-high 190.850 en route to a second-place finish in the “Think Pink” meet.
02/08/14 12:07am

Jaffe | Offense telling only half the story for Penn basketball

The Quakers pulled out the ‘W’ against 1-18 Cornell. But if they don’t shore up their defense, they’ll be seeing red for the rest of the season.

Penn gymnastics look to rebound after loss to Yale

Coming off an underwhelming performance in a loss to Yale last weekend, the Quakers will look to rebound this Saturday at the Ken Anderson Invitational hosted by Temple. The five-team invitational will feature Penn, Temple, Cornell, Ursinus and West Chester.
01/19/14 1:00pm

On Saturday, Penn fell to Illinois State, 190.4 – 187.9, in their first non-exhibition meet in the renovated Hutchinson Gymnasium.

On a snowy Thursday evening, Penn dropped its sixth straight game, falling to George Mason at the Patriot Center, 80-77, after Tony Hicks couldn’t connect on a game-tying three-pointer.
11/27/12 12:40am

Coach John Ceralde’s freshmen are joining a squad with high expectations following a season in which the team won the Ivy Classic and the ECAC Championship.
More Articles

I didn't go out for Halloween last night. Instead, I sat home and analyzed two hours of film in preparation for the basketball team's opener against the UTEP Miners.Here's what I learned:The Miners possess an all-black starting five and a coach who wants to get them to play "white basketball." They wear their shorts really short, and the players are partial to Smokey Robinson.OK, so I didn't watch the most up-to-date game film.
10/27/06 4:22pm

Anything but Uniform: Brown

Get those tents ready. Duke's Krzyzewskivilles, if only for one day, are coming to Penn.The athletic department announced that for the Saturday, Jan.
10/20/06 6:41pm

Anything but Uniform: Yale

Hey Penn fans! Want to see a team that actually looks like Penn State?Well you'll get your chance tomorrow as Penn visits Yale, which looks like this at home.Aside from a few minor differences (Yale's actually more complex, with pants piping, shoulder logos, a slightly different number font, and a helmet with two stripes and a logo instead of a blank helmet with one stripe), the two teams are essentially the same, with the exact same color schemes and basic template.
10/15/06 11:49am

They were seven of the most unreal minutes of my sports-writing life. Following Penn's 16-0 win over Columbia yesterday, Lions coach Norries Wilson absolutely exploded at his post-game press conference, and it was a sight to be seen.Wilson was asked by a reporter from the Columbia Daily Spectator to discuss the inconsistency on offense.
10/11/06 5:23pm

The state of recruiting

In my estimation, there were four types of Fran Dunphy recruits: the local kid, the Jersey kid, the Cali kid and the miscellaneous.
10/10/06 9:37pm

I was watching the Eagles-Cowboys game Sunday when the announcers pointed out that the Birds had a different leading receiver in each of its five games.Week 1, it was Donte' Stallworth against the Texans.
10/09/06 1:47am

Odds and ends from the Bucknell game

Braden Lepisto's 140 receiving yards were the most for a Penn wideout since Oct. 2, 2004, when Dan Castles caught nine for 145 in Penn's 35-0 win over Dartmouth.Castles also had two other games that season with more than 130 yards receiving...It was a tough call for the play of the game between Joe Sandberg and Joe Sandberg.We went with his 41-yard touchdown run, on which he found a hole, sprinted downfield toward the left sideline, juked a defender, got a big block from Josh Koontz and reached the end zone.But we could have easily gone with Sandberg's play in the closing seconds of the second quarter.
10/06/06 4:40pm

Anything but Uniform: Bucknell

Penn has its final non-conference game tomorrow in Lewisburg, Pa, against Syracuse Bucknell, whose home uniforms look (a lot like the Orange's) like this.This uniform is a more "modern" version of the Bison's previous duds, which Penn saw two years ago. (Notice a field goal actually being made here)I like the change, especially the disapperance of the orange stripes on the pants which looked pretty obnoxious.
10/05/06 2:08am

More on the football schedule

As a companion to the article about the renewal of the Ivy League football schedule, through 2017 from today's DP, here are three additional questions and answers:1.
09/29/06 8:03pm

Anything but Uniform: Dartmouth

Penn starts the Ivy League season this weekend with Dartmouth -- the team with arguably the most interesting uniforms in the league and the most recent changes.As recently as 2001, the Big Green wore this. I know it's hard to see, but you can see the following attributes -- sleeve stripes, white pants, black socks, "normal" varsity block numerals.in 2002, it was the same design, which was made by Wilson.In 2003, the Big Green switched to Reebok, with this at home, and this on the road in 2004.The big difference is the addition of black, which when it's paired with green together, looks awful.Then, under new coach Buddy Teevens, Dartmouth switched to Nike in 2005, and all green look.
09/29/06 6:42pm

VILLA NOVA OUTCLASSEDSo read the headline of The Pennsylvanian, the predecessor of today's Daily Pennsylvanian on Monday, Oct.
08/04/06 1:25pm

Remember when Penn was just a Division I football program?Life was sure simple then.Then the Quakers moved to Division I-AA when that division was created in 1978.But after 28 years, the leaders of the I-AA schools have had enough of being what they called "second-class citizens".So in typical bureaucratese, the NCAA has decided to reclassify I-A and I-AA.
07/24/06 12:47am

It's a comparison that Penn fans hope never becomes reality. But this basketball off-season has already been filled with three or four distractions that makes me worry about the team's chances in the upcoming season.First there was Temple's unusually drawn-out courtship of former coach Fran Dunphy.
05/09/06 7:39pm

I just got back from Center City, where Philadelphia Mayor John Street held a press conference with members of the United States Olympic Committee touting the city's bid to host the 2016 Summer Olympics.As far as projecting an image of this city goes, they could not have picked a better backdrop: the heart of LOVE Park, a tree-lined Ben Franklin Parkway and the Philadelphia Museum of Art on an overcast but warm spring afternoon.
05/04/06 1:27am

One in, one out

Nothing gets a college sports fan excited like the NCAA Tournament selection show. OK, so maybe the NCAA tennis selection show isn't quite as exciting as its basketball counterpart in March, but for Penn fans, there was some genuine interest.
04/30/06 6:16pm

For the second year in a row, the Ivy League had exactly one man picked in the NFL Draft. Last year, Harvard quarterback Ryan Fitzpatrick went in the seventh and final round to St.
04/29/06 5:32pm

Courtney Jaworski had no doubt that his team belonged in the men's 4x800-meter Championship of America race.
04/29/06 1:40pm

Hogs finally get one

Arkansas had been on a bit of a drought, you could say. The Razorbacks went home empty from last year's Penn Relays, and they were on the verge of doing the same this year.
04/29/06 10:03am

It's the start of the final day of the 112th Penn Relays, and people are jamming into the stands early to see all the big races.
More Posts