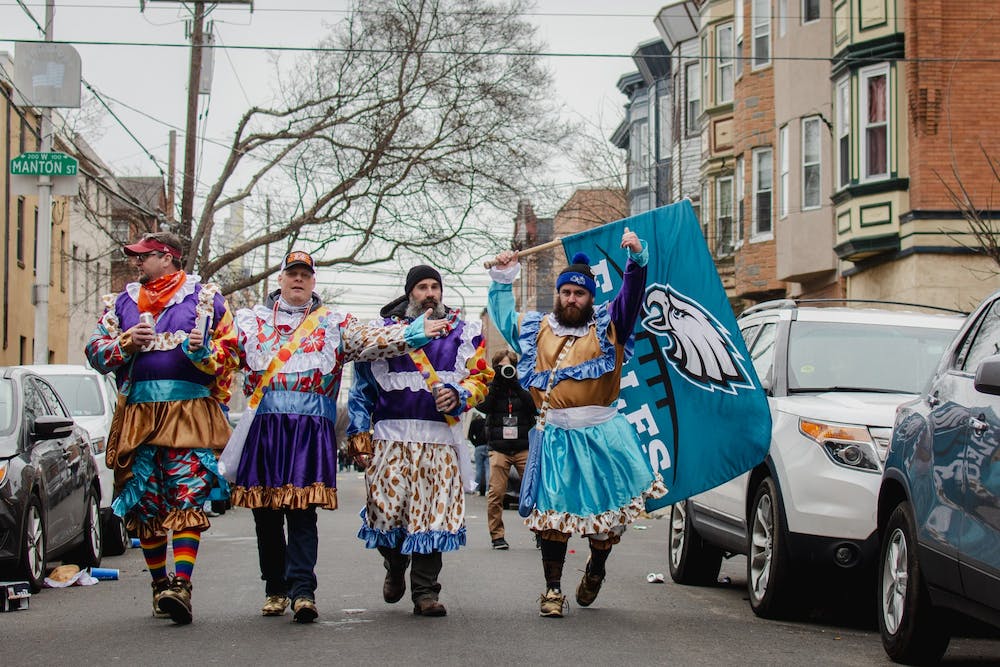 Philadelphia’s annual New Year’s Day Mummers Parade was canceled this year because of the ongoing COVID-19 pandemic, but that didn’t stop some Mummers and residents from marching down 2nd Street to protest Philadelphia Mayor Jim Kenney and celebrate the beginning of 2021.

The Mummers Parade, which has been officially held in Philadelphia since 1901, has recently come under scrutiny after multiple instances of Mummers wearing blackface during the parade. In January 2020, Kenney threatened to end the Mummers Parade if the racist behavior continued.

While some Mummers denounced this year’s protest, hundreds still strutted through South Philadelphia. Many were maskless, shared drinks, and danced in tight groups. Here’s what this year’s Mummers Parade looked like:

Several separate groups paraded down 2nd Street throughout the day. One of the larger groups gathered around a truck that carried a live jazz band.

A demonstrator with a "Stay Safe" sign posed with a stranger on the street, both maskless.

Protesters marched down 2nd Street with flags and a "Mummers Lives Matter" sign.

A resident along 2nd Street had a pitcher of beer and handed out cups to passersby.

A Mummer in clown face paint and a red nose smoked a cigarette.

In reference to Mayor Kenney's threat to end the parade, one Mummer held a sign reading "Tradition Not Tyranny."

South Philadelphia resident Pat Kreschollek shouted as a "Trump 2020" flag waved behind him.

A toddler looked out from a car at protesters marching past.

A demonstrator held up his middle finger and a cigarette.

Local residents cheered on the passing crowd from their front porches.

Two children wearing face paint and full Mummer attire participated in the protest with their father.

Music was a significant feature of the march. In addition to the live jazz band on the truck, there were multiple demonstrators who brought their own instruments.

Mummers often approached residents watching the protest from their homes, saying hello and wishing them a happy New Year.

Cans and beer bottles piled up as the New Year's Day event continued.

A protester donned a plague mask, incorporating a dark twist on a traditionally lively outfit.

A sign on the back of one truck read "Bye, Bye 2020!" with hand sanitizer and toilet paper imagery.

As the day went on, one Mummer took a break from the festivities.