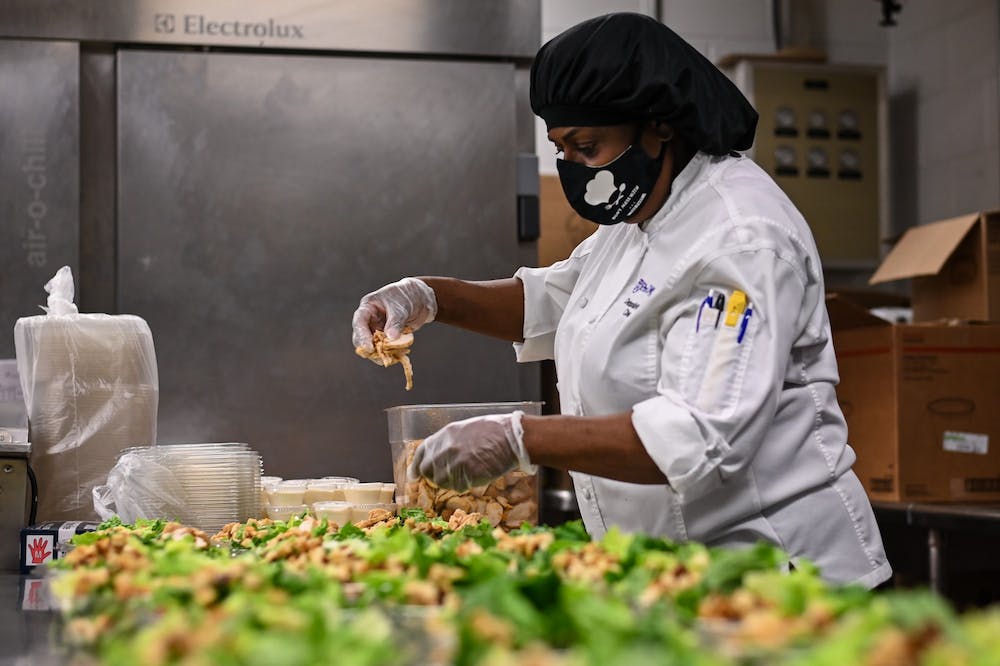 When Penn announced that campus would close in March, most students hurriedly packed their suitcases, booked flights home, and said goodbye to their friends earlier than expected. But a small number of students remained on campus, and the University could not shut down completely. Buildings and grounds still needed to be maintained, campus still needed to be patrolled, and students still needed to be fed.

As most of America remained indoors to minimize the chances of contracting coronavirus, Penn’s essential workers continued to clock in each day to make sure campus kept running.

Here are the stories of seven essential workers who have risked their safety for months on end to keep the University functioning during the COVID-19 pandemic.

Sun, rain, snow, sleet, wind — no matter what the weather is like, David Gordon patrols campus each day as an Allied Universal guard. For 18 years, he has biked and walked the paths of campus, escorting students and other Penn community members who feel unsafe walking alone and answering any questions passersby may have.

Allied Universal is the company through which Penn contracts security guards.

With fewer students on campus, there have been less calls for walking escorts, but Gordon and his co-workers continue to be stationed at a number of locations throughout campus.

“There’s been a decrease [of people on campus], but we’re here for the many that are still here,” Gordon said. “We’ll always be here.”

Although campus is quieter now, Gordon's passion for his job and the community hasn't gone away.

“This is not just a job; this is my family,” Gordon said. “The University of Pennsylvania, Allied Universal — these are my family. The students are my family.”

The School of Veterinary Medicine has welcomed back most of its faculty, staff, and some students, though they come in as groups during different times and days to limit contact with as many people as possible.

As an essential worker, Mack has kept at her daily 6:00 a.m. to 2:30 p.m. shift. Housekeepers have had to pay more attention to cleaning high-touch points like handles, railings, and bathrooms.

“I’m just trying to do the job I was trained for,” Mack said. “I get my job done to make [doctors’ and professors’] jobs easier.”

Since March, Mack has left her house only to buy essential goods, making her interactions at work even more valuable.

“I’ve met a lot of people at the University, especially here in the Vet school,” Mack said. “I’m really in close contact with the doctors and assistant professors. I just really enjoy working with people.”

Gary Smith has been a plumber at Penn for almost 10 years, working wherever repairs are needed across campus. Unlike most other positions, Smith’s workload has hardly changed due to the pandemic.

“Whether you have one person in a building or a building is fully occupied, that building is in service and has to be maintained,” Smith said. “One of the disadvantages of not having more people on campus is we lose some of the eyes and ears out there, so sometimes we don't find things right away.”

With the majority of students and faculty working remotely this semester, Smith noted a decrease in "wish list" work orders — maintenance issues that do not require immediate attention. Yet, his days are never lax and require him to see to at least six work orders a day.

When campus closed in March due to the coronavirus outbreak, the plumbing staff worked on a rotating schedule. Workers were brought back in stages, and it was not until the beginning of June that the entire staff was working full time again.

“Now, we haven’t missed a beat,” Smith said. “Plumbing is a necessity of life.”

Smith said he now interacts far less with his fellow co-workers. Prior to the pandemic, all of the plumbers would meet every morning; now, everyone is assigned work through an online maintenance management system.

Despite the lack of socialization, Smith said he still loves coming to work every day.

“I guess I’m one of the few lucky people who actually really like what they do,” Smith said. “You’re just solving people’s problems. I enjoy that. I enjoy figuring out a more efficient way of getting things done.”

In her 23 years as a Penn Police officer, Nickol Taylor's favorite part of the job has always been forming interpersonal connections with Penn and Philadelphia community members. Before the pandemic, Taylor would oftentimes strike up conversations with pedestrians while patrolling her area from 39th Street to 41st Street.

“I'm able to socialize with a bunch of people who don't necessarily work for the University or attend the University,” Taylor said. “Every day is something new. The people may be the same, but there's always something going on.”

But when the pandemic hit, the conversations Taylor thrived on came to a halt.

“When COVID started, it was like a ghost town,” Taylor said. “All the businesses were closed, nobody was around.”

Her job became focused on making sure storefronts were secure and simply being present in the area. As restrictions loosened and people began leaving their homes again, the energy of past conversations was still missing. Taylor has noticed that people have become less willing to have a lengthy conversation, instead opting for a quick “How are you doing?”

Taylor has not let the lack of interaction bring down her attitude about the job, however. Being an essential worker has allowed her to continue helping the community, even during a crisis like the COVID-19 pandemic.

“Even though you're home, I'm still outside making sure that when you come out, you're still safe; you're still taken care of,” Taylor said. “I know that there are avenues that people don't know how to navigate. If I can help them just a little bit, make their day go a little bit easier, it makes my day that I was able to help somebody when they needed help.”

In his six years of being a Penn Transit dispatcher, Eric Brooks has not missed a single day of work. From performing vehicle pre-inspections, making sure drivers are prepared before hitting the road, to managing drivers’ routes, Brooks oversees a number of behind-the-scenes operations.

Penn Transit ridership declined significantly after campus closed. During the lull, Brooks and his fellow dispatchers helped train drivers on new safety protocols and procedures. Numbers are gradually rising again, Brooks said, with some services such as Penn Bus East and Penn Bus West now back up and running.

“We don’t know what’s gonna happen, so we’re really just trying to stay ready for whatever situation that may come up,” Brooks said. “If the University decides to come back in a month, we should be ready for it.”

In the era of COVID-19, Brooks starts off his day by checking Penn Transit vehicles to ensure the necessary personal protective equipment are inside each vehicle's safety bucket. He then goes back inside the Penn Transit office, where he is surrounded by the same people every day.

“There’s always a plus when you’re working with people you appreciate,” he said. “We have this thing here where we’re all on the same page, so it makes the job — the actual work — kind of easy.”

For the past 50 years, Deborah Day has put on her chef jacket and come in to work at one of Penn’s dining halls. Although usually a chef at Kings Court English College House, the pandemic has brought her full-circle to cook in the dining hall where she began her journey at Penn: Class of 1920 Commons.

As the only dining hall open this semester, 1920 Commons offers takeout services for students living in on-campus housing. While the cavernous hall now largely lies in silence, the pandemic has not impacted Day’s work as a chef. Her first priority has always been making sure each student on campus is fed.

“A couple years ago, it snowed so bad, nothing was running,” she said. “I walked to work, because that’s what I had to do — because I’m a social worker, and I need to be here, and these kids need to be fed.”

Day is in charge of breakfast, lunch, and dinner preparations, working nonstop from 6:00 a.m. to about 1:00 p.m. She cooks all day long alongside her fellow chefs, which is her favorite part of the job.

Josefa Valdivia has been a PennComm & Emergency Communications dispatcher for five years. She picks up calls that come into the station, sends out Penn Police officers and Allied Universal guards — many times as walking escorts — and monitors alarms and cameras throughout campus.

Valdivia said the volume of calls has remained about the same as it was before the pandemic. She noted, however, the station has been receiving more complaints concerning loud noise from parties, as well as calls about lost belongings.

Whether she is calming someone down in a tense situation or asking as many questions as possible to get someone the best help she can, Valdivia said being an essential worker means giving the job 110% of what she has and nothing less.

“I feel like I'm making a change, and I'm helping the community out,” Valdivia said. “Even if it's just by answering a phone call or dispatching someone out, at least I'm doing something.”