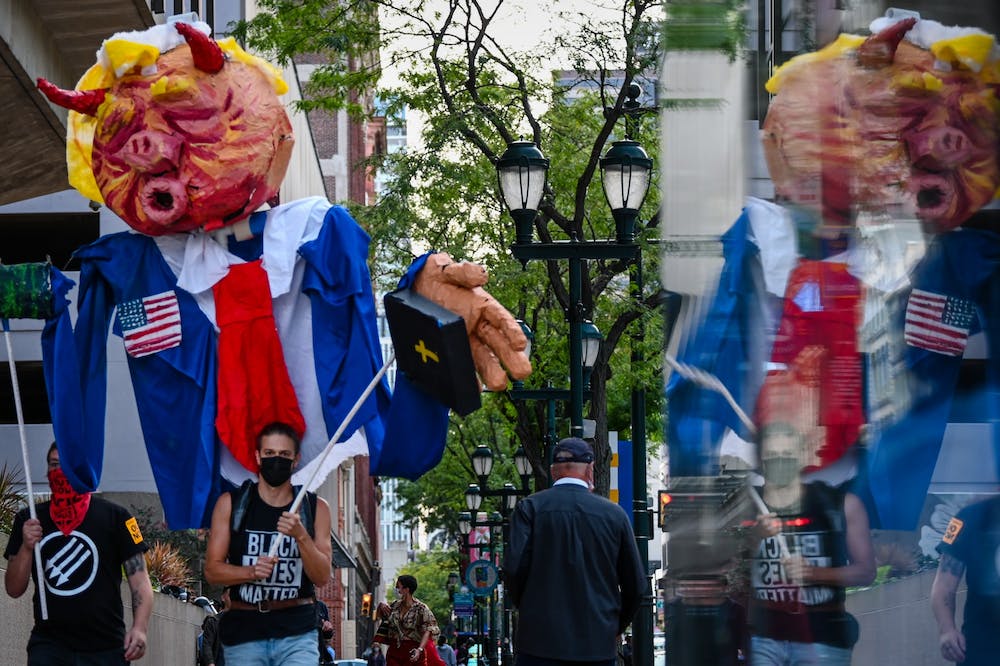 While 1968 Wharton graduate and President Donald Trump sat in Philadelphia's National Constitution Center Tuesday evening for a town hall with undecided voters 49 days before Election Day, at least 200 anti-Trump protesters gathered outside of the venue making speeches and waving signs.

Between chants of "Trump, Pence! Out now!" and "Off the sidewalk and into the streets," the demonstrators called out Trump's stance on racial equality and his handling of the COVID-19 pandemic. A small group of Trump supporters waved flags in support of the president, sparking outcry among demonstrators. Here's how Tuesday night's protest played out.

The demonstration began at 4:00 p.m. Protesters lined the sidewalks on both sides of Market Street, calling for a return to democracy as they stood in front of Independence Hall.

The protest was organized by Refuse Fascism Philly, Penn Community for Justice, and other Philadelphia-based social justice groups.

Police stood guard throughout Independence Mall, leading up to the National Constitution Center, where the town hall was held.

Trump supporters were met with chants from the anti-Trump protesters. A woman impersonating Trump danced in front of the supporters.

As tensions heightened between protesters and Trump supporters, photojournalists gathered to capture the scene.

A Trump supporter and protesters exchanged words and clashed with each other about Trump's presidency over the last four years.

Some people showed their support for former Vice President and Penn Presidential Professor of Practice Joe Biden during the protest.

A heavy police forced barricaded the area surrounding the National Constitution Center from all sides. A man in a police costume wearing a pig mask stood in front of the officers in mockery.

Protesters continued to demand for racial justice outside of Independence Hall as the evening went on.

Some protesters chalked the sidewalk, one calling on Trump to leave Philadelphia, as there was “no room for fascists” in the city.

At 7:00 p.m., protesters gathered for a vigil to honor the lives lost from police violence and the 2018 Tree of Life shooting. A cellist began the vigil.

Volunteers lit candles for the vigil and placed them in front of pillars and posters bearing the names and faces of those lost.

Throughout the demonstration, speakers emphasized to the crowd that their voices and actions are impactful steps toward racial justice and political reform.