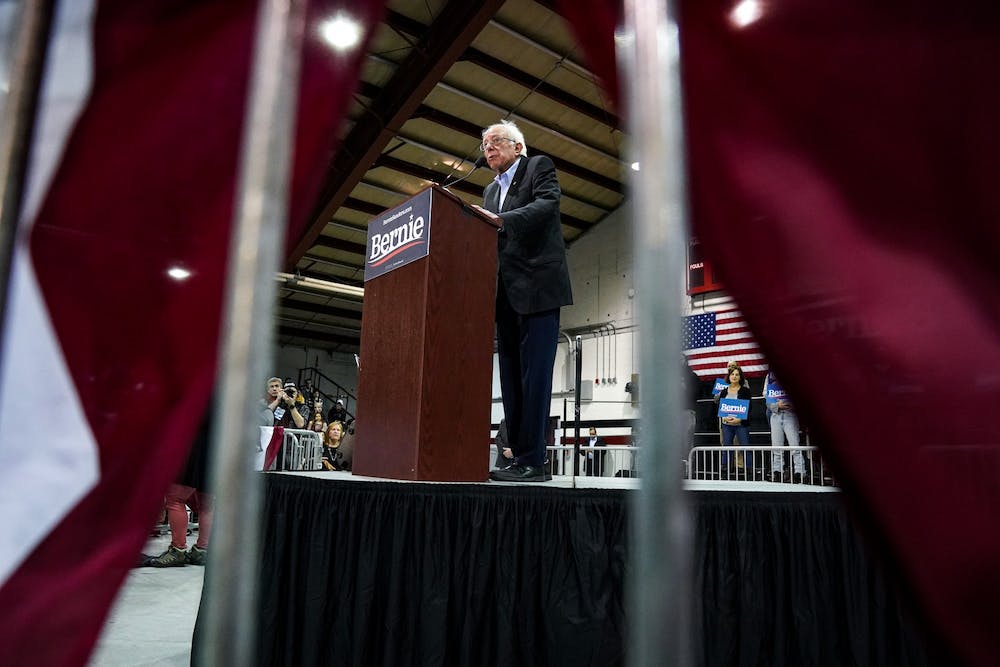 Four journalists from The Daily Pennsylvanian spent three days in New Hampshire covering the first-in-the-nation primary. The team attended a Donald Trump rally, a Bernie Sanders campaign event, and interviewed Elizabeth Warren at a town hall. They listened to Alexandria Ocasio-Cortez speak, watched The Strokes perform, and talked to Pete Buttigieg supporters at a primary night watch party. The following photographs depict the final moments in the race for New Hampshire.

The Sanders canvassers worked out of a small office in Dover.

Supporters sat on the floor for a better view of the stage at Elizabeth Warren’s town hall held the morning before the primary.

People of all ages came to listen to Warren speak, have their questions answered, and take a selfie.

Warren was surrounded by the attendees in Lebanon, cheering and waving their "vote for courage" signs.

The evening before the voting began, Donald Trump held a rally in Manchester. His supporters — and their red hats — came in spades.

Trump spoke for about an hour, standing and gesturing at the podium.

Ivanka Trump, Trump's daughter, attended the rally and gave her father a kiss on the cheek.

As Trump's rally occurred in Manchester, Sanders held his final campaign event before the primary. Alexandria Ocasio-Cortez spoke in his support and engaged with the crowd.

After Trump, AOC, and Sanders stepped offstage, The Strokes closed out the night before New Hampshire voters would wake up and head to the polls.

Voters across the Granite State went to schools and other polling stations to cast their ballots.

The final polls in New Hampshire closed at 8 p.m. Attendees of Sanders' primary night rally waited for the result to come in and for Sanders to come out to speak.

While the votes were being tallied, Sanders supporters passed the time by mingling.

Around 20 minutes away from the Sanders rally, Pete Buttigieg’s supporters watched the results come in from Nashua at his primary night event.

As it became clear that Buttigieg would finish in second place, he spoke to his supporters and gave his husband Chasten a hug.