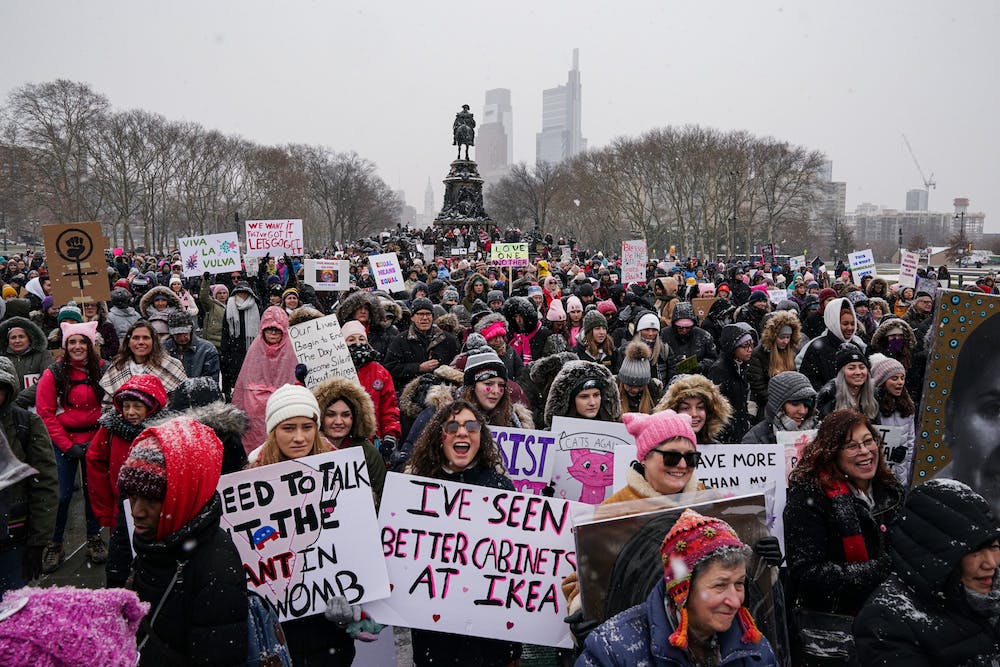 Thousands took to Benjamin Franklin Parkway on Saturday as part of the fourth annual Women’s March on Philadelphia. The diverse crowd held signs that addressed issues like gender equality, the presidential election, and climate change.

The march started at Logan Circle and ended at the Philadelphia Museum of Art. Among the event’s speakers were Philadelphia Mayor Jim Kenney, local female Democrats Madeleine Dean, Chrissy Houlahan, and Mary Gay Scanlon, and other local activists.

The Philadelphia Police department showed a strong presence along the march route, following the crowd on bikes and blocking off roads.

Many marchers dressed up in a variety of symbolic costumes, including the Statue of Liberty.

Young children were amongst the crowd with their families, many holding their own signs.

People of all genders took part to show their solidarity.

Marchers went from Logan Circle to the Philadelphia Museum of Art, traveling along the Benjamin Franklin Parkway.

Groups addressed a number of social and political issues throughout the event.

"This is what democracy looks like" and "Hey hey, ho ho, Donald Trump has got to go" were some of the chants heard.

Dogs joined their owners on the walk down the Parkway.

As the march progressed and the speeches began, snow began to fall.

Philadelphia Mayor Jim Kenney spoke to the crowd, noting the recent increase of women in both the Pennsylvania and national governments.

People cheered enthusiastically in support of the speakers' messages.

There were references to President and 1968 Wharton graduate Donald Trump and his recent impeachment.

Amongst the women's rights issues highlighted by the marchers was abortion and the right to choose.

(From left to right) Local female Democrats Mary Gay Scanlon, Madeleine Dean, and Chrissy Houlahan all spoke in support of the march.

The march transcended generations, as well as gender, race, ethnicity, sexual orientation, and other identities.