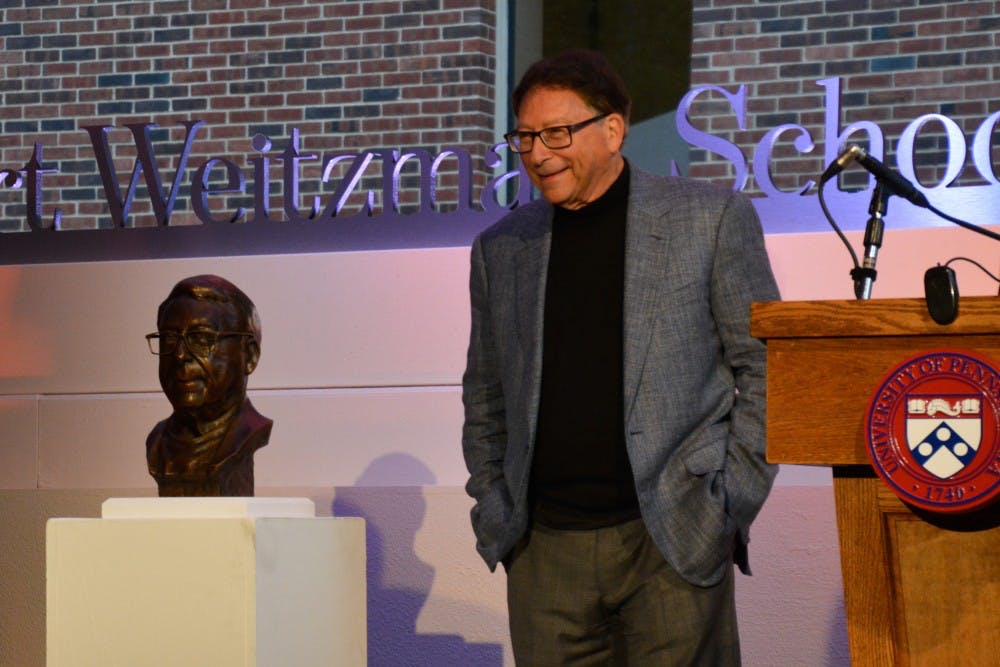 Despite the rain, many attended the ceremony at the plaza in front of Meyerson Hall. Gutmann announced the plaza will be redesigned, renovated, and named Stuart Weitzman Plaza.

The ceremony began with Steiner summarizing the Weitzman School's offerings, goals, and accomplishments, and Gutmann expressed gratitude for Weitzman's engagement with Penn. Following Gutmann's speech, Weitzman took the stage and urged students to embrace design in their lives. A bust of Weitzman was unveiled that will be displayed in Meyerson Hall.

Weitzman, a 1963 Wharton graduate, is best known for designing luxury shoes that have been worn by countless celebrities. However, many design students voiced their opposition to the renaming since Penn does not offer any programs in fashion design.

The stage was set with a new sign and a veiled bust.

The naming ceremony was held under a tent between Meyerson Hall and Fisher Fine Arts Library. The area will be called Stuart Weitzman Plaza following a renovation.

The naming ceremony concluded a day of events called "The Weitzman School: A Celebration of Design."

Dean of the Weitzman School Frederick Steiner was the first speaker.

Penn President Amy Gutmann stepped up to the podium next.

Gutmann welcomed Weitzman to the stage.

Weitzman spoke of the importance of embracing design in one's life, no matter their field of interest.

Gutmann and Steiner unveiled a bronze bust of Weitzman.

The ceremony concluded with Weitzman addressing the crowd one last time, eliciting many laughs.

Provost Wendell Pritchett, Gutmann, Weitzman, and Steiner posed with the bust after the ceremony was over.

Audience members looked at renderings of the Stuart Weitzman Plaza on multiple screens placed throughout the tent.

Many alumni, students, and other audience members thanked and congratulated Weitzman after the ceremony.

The bronze statue of Weitzman will now be displayed in Meyerson Hall.