Thousands of activists marched through Center City on Jan. 20 2018 for the second Women's March on Philadelphia.

The massive group of participants included Penn students, young children, elderly adults, and pets. Departing from Logan Square, demonstrators paraded up the Benjamin Franklin Parkway to Eakins Oval for a rally in front of the Philadelphia Museum of Art. Many marchers could be seen wearing pink "pussy hats" and carrying signs with slogans on topics such as gender equality, climate change, and religious freedom.

The rally in Philadelphia was one of dozens that were held around the country for activists to demonstrate their persistent critiques on President Donald Trump and his administration. 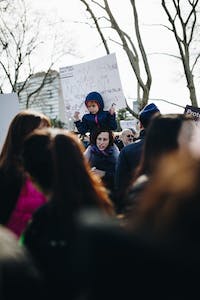