Around noon on Thursday, "Brother Ross" Jackson arrived on College Green preaching his message against homosexuality as part of his tour across American college campuses. Hundreds of students gathered in a circle to debate with the preacher throughout a three hour period, stopping in between classes and lunch. By 2:30pm, another group of students stood on the button in front of Van Pelt Library, holding signs to protest Brother Ross's message. Because it was a space open to the public, the preacher could not be stopped, but police stood watch throughout the afternoon. 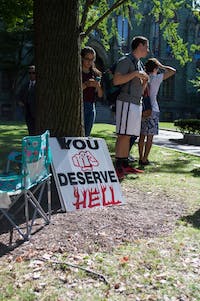