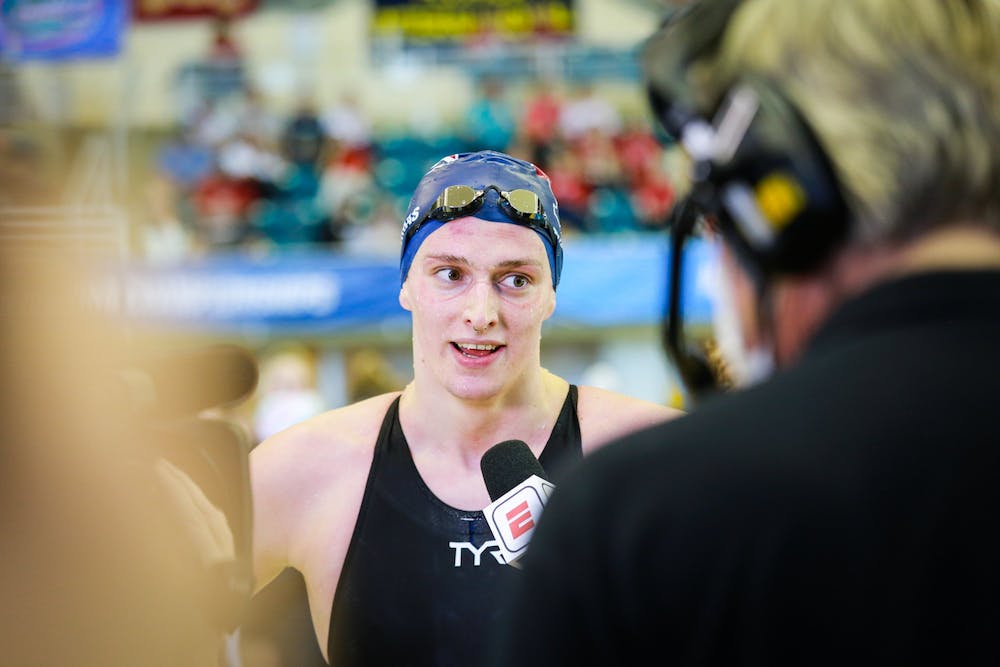 The NCAA Division I Women’s Swimming and Diving Championships took place at the Georgia Institute of Technology in Atlanta from March 16 to March 19. Among the participants are three Penn swimmers: juniors Catherine Buroker and Anna Kalandadze, and fifth-year senior Lia Thomas. With Thomas becoming the first transgender NCAA swimming champion, protestors and supporters outside the competition venue, and a whirlwind of cheering, felicitation, and controversy, here's a look into the national stage where three Penn women's swimmers competed across four days.

At the entrance of the Georgia Tech McAuley Aquatic Center, the host venue of the championships, protestors against Thomas’ participation in the championship lined the sidewalk with signs reading “Save Women’s Sports.”

Across the street, they were met with counter-protestors — represented by mostly students of Georgia Tech — supporting Thomas’ participation in the championships.

Counter-protestors held signs in solidarity with transgender athletes and chanted against the hate speech and discrimination directed at Thomas.

Thomas’ first final race was the women’s 500-yard freestyle competition. When Thomas was introduced alongside her fellow swimmers, polite but restrained claps fell upon the room compared to the voluminous cheer for other swimmers.

With a time of 4:33.24, Thomas finished first and became the first transgender woman to win an NCAA Division I Championship title.

After Thomas won the 500-yard freestyle competition, fellow swimmer Emma Weyant, representing the University of Virginia, shook hands with Thomas and congratulated her.

The spectator stands, with individual seats selling out at nearly $120 per session, were filled with families, friends, and supporters of the swimmers. Among them were those supporting the University of Virginia, who placed first in the championships overall.

Schuyler Bailar (right), the first openly trans swimmer to compete in NCAA Division I swimming, demonstrating his support for Lia Thomas along with Alix J. (left), one of the facilitators of the Georgia Tech T+ group, holding a trans flag on March 18, 2022. Thomas placed fifth in the 200-yard freestyle competition.

Anna Kalandadze, another Penn swimmer who also competed in the 1,650-yard freestyle, finished with a time of 16:31.04.

Erica Sullivan, who represented the University of Texas in the 1,650-yard freestyle, recently published an op-ed in Newsweek in support of Thomas. Sullivan placed second in the event.

On the last day of the championships, Iszac Henig, a transgender swimmer representing Yale University, wrote “Let Trans Kids Play” on his arm as he competed in the 100-yard freestyle.

Thomas shares a hug with fellow swimmer Henig on the podium in a moment of shared joy.