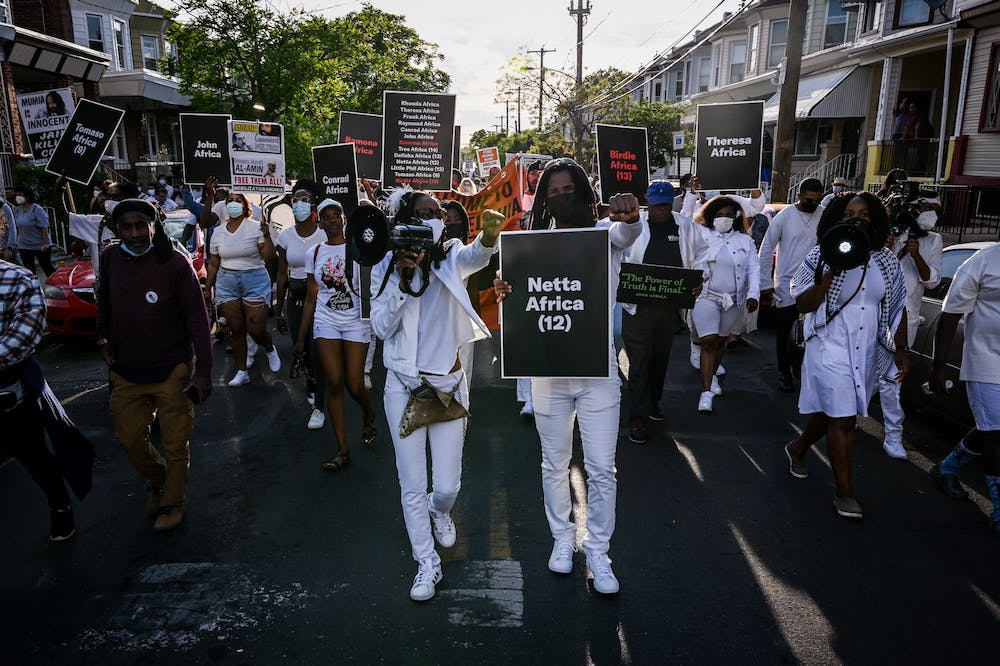 MOVE organizer Mike Africa Jr. and activist YahNé Ndgo led the march down Pine Street in West Philadelphia during the MOVE Day of Remembrance to Honor the Lives Lost event.

On May 13, 1985, the Philadelphia Police Department dropped a satchel bomb on 6221 Osage Ave. in West Philadelphia, where some members of the Black liberation advocacy group MOVE lived. 11 people were killed, including five children, and one adult and one child survived.

To mark 36 years since the MOVE bombing and remember the lives of those lost, about 200 West Philadelphians gathered at Osage Avenue and Cobbs Creek Parkway on Thursday. The crowd marched to Malcolm X Park, chanting "on a move" and the names of the victims.

The remains of at least one of the victims, which is believed to be 14-year-old Tree Africa, was recently found to have been housed by the Penn Museum without the Africa family's knowledge. They continued to move between Penn and Princeton University by researchers Alan Mann and Janet Monge for 35 years. Following a protest that demanded the remains be returned, Penn apologized, and Mann has given the remains to Terry Funeral Home to keep until further plans are made.

Here's how West Philadelphians remembered the 36th anniversary of the MOVE bombing.

Attendees walked down Osage Avenue to join the crowd on Cobbs Creek Parkway. People were asked to wear white in respect of the lives lost.

People waved a parachute patterned with cowrie shells, made by artist Charlyn Magdaline, as part of a consecration ritual.

Mike Africa Jr., a MOVE organizer and one of the main speakers, read a part of the story of the MOVE bombing. The event began at 5:27 p.m. ET, the same time the bomb was dropped.

The march came to a stop near 6221 Osage Ave., where Kenneth Taylor played "When the Saints Go Marching In" on the trumpet.

Demonstrators held a banner demanding the freedom of Mumia Abu-Jamal, a journalist and activist who was convicted of murdering a Philadelphia police officer in 1981 and is still incarcerated.

As the crowd marched past the Philadelphia Police's 18th district building, some raised their middle fingers and shouted, "F**k the police!"

The marchers met with dozens more at Malcolm X Park, where the event continued with speeches from organizers, activists, and those who had memories of the bombing.

One of the speakers was School of Social Policy & Practice professor and grassroots organizer Walter Palmer.

Activist YahNé Ndgo hugged an attendee backstage as Mike Africa Jr. addressed the crowd, encouraging them to "rise up and fight this system and push for accountability."