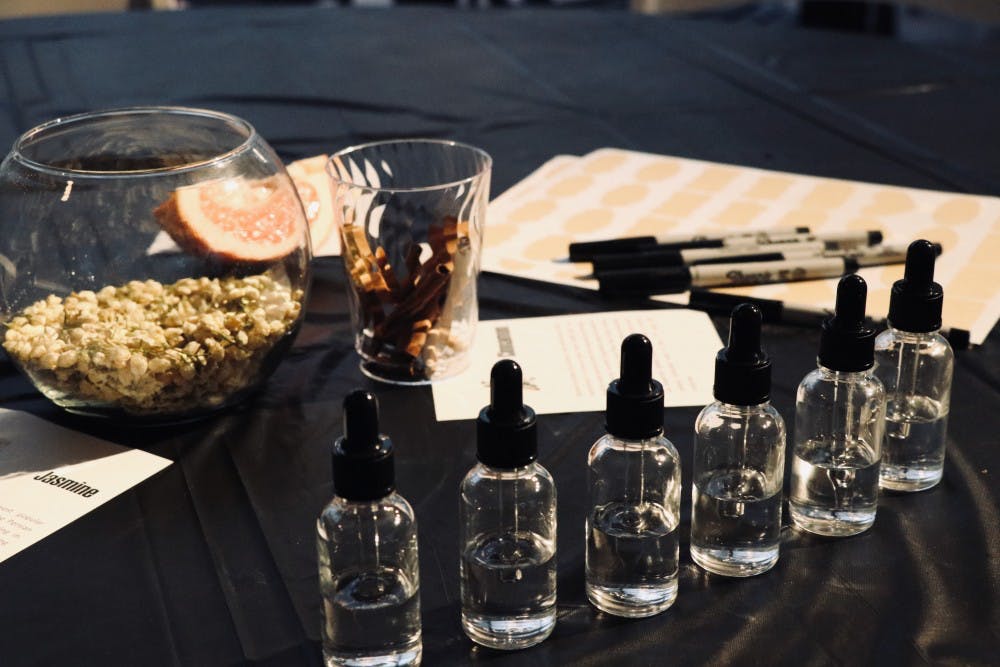 The event, "Sniff: Perfumed Oils of the Ancient World," had 60 students in attendance.

On Thursday night, the Penn Museum was filled with students making their own perfumed oils and studying the role of smell in different cultures.

Over 60 students attended "Sniff: Perfumed Oils of the Ancient World," the first of several workshops in Penn Museum's 2019-2020 Making Workshop series. These workshops provide an interactive opportunity for both undergraduate and graduate students to engage with the Museum’s collections.

Museum curator and Anthropology professor Lauren Ristvet spoke for half an hour on the importance of smell in various cultures, giving examples of how scents are viewed differently in various cultural contexts. In ancient Rome, for instance, perfume was worn widely by both men and women, while in 19th century Britain the "Great Stink" brought Parliament to a standstill and encouraged the construction of an underground sewage system.

Ristvet also led a discussion on the gendering of specific scents throughout history, citing the French nobility’s infatuation with musky scents and the current association between musky scents and masculinity.

Afterward, students were able to explore perfume-related museum artifacts which were taken out of storage specifically for the event. These included ancient distillation vessels and perfume containers.

Kelsea Gustavon, the museum’s teen and undergraduate engagement coordinator, led students in a perfumed oil making workshop with scents including frankincense, amber, jasmine, and tobacco. Students were encouraged to follow provided recipes for the various scents, but also to embrace their creativity and make adjustments to truly customize their fragrance.

Gustavson said that at the Making Workshops, organizers try to give students useful mementos they can take back to their dorms. Previous souvenirs from Making Workshops include homemade spice blends, Korean fighting kites, and mosaic coasters.

“First and foremost, these events are always educational," Gustavson said. "We really focus on making sure that not only are you walking away with something that reminds you of the Penn Museum, but we want you to have a really well-rounded and educational experience.”

Gustavson added that the Museum has planned several more Making Workshops for the upcoming academic year, including a tea tasting session and an analysis of African inked adinkra symbols in early 2020. The Museum will also host a Student Gala on Nov. 13, where students will be able to explore its new Africa and Mexico & Central America galleries before the public.