2016 collegiate season just a tune-up for this summer

One set the all-time Ivy League record for the indoor mile. The other claims an individual NCAA national championship to his name.

And both have a lot more up their sleeves.

If all goes as planned for senior men’s track and field stars Thomas Awad and Sam Mattis, this June’s NCAA National Championships won’t mark the end of their respective 2016 seasons. With the U.S. Olympic Trials coming up in preparation for this summer’s Rio de Janeiro Games, both seniors will have an opportunity to swap the Quakers’ Red and Blue uniform for that of the U.S. Men’s National Team.

“These trials are something that’s been on the front of my mind since like the ninth grade,” Mattis said. “It’s finally here and definitely looking more realistic, and I couldn’t be more excited.”

Mattis made a name for himself in 2015, re-defining the term “clutch” with a lifetime best 62.48-meter effort on his last throw of the NCAA Championships to become Penn’s first national champion in any event since 2003.

“Obviously that was an awesome accomplishment for me; winning that championship was something I’d wanted to do since my freshman year, and to actually get it done was surreal,” the two-time All-American said. “I’m still not even sure if it’s hit me yet.”

With a maximum of three American competitors per event allowed to head to the Olympics, though, Mattis still appeared to be a tier below the nation’s elite, as his school record throw was more than 2.5 meters below each of the top three American athletes at the conclusion of 2015.

But with a flick of the wrist at last weekend’s Philadelphia College Classic, Mattis went from a fringe contender to the arguable favorite in the blink of an eye.

Opening the outdoor season, Mattis picked up right where he left off at the end of 2015 — and then some. On his first official throw of the spring, Mattis surpassed his personal record by more than 16 feet, securing a throw of 67.45 meters to take the best mark in the event on the planet, for competitors of any age, in 2016.

Put into perspective, Mattis’ throw was the fourth best in NCAA history, and the farthest by any collegiate athlete born in the United States. He became the first American at any age level to surpass 67 meters since Jarred Rome did so back in August 2011. If placed in the 2012 Olympic Games, Mattis’ throw would’ve taken fourth place in the men’s discus competition — more than five meters ahead of Jason Young, who was the United States’ highest finisher at 18th place.

And, for good measure, the senior proved that his breakout performance was no fluke during the remainder of Saturday’s competition. With two more attempts surpassing 66 meters in that same meet, Mattis now claims three throws past that mark in 2016 — the rest of the world has none. 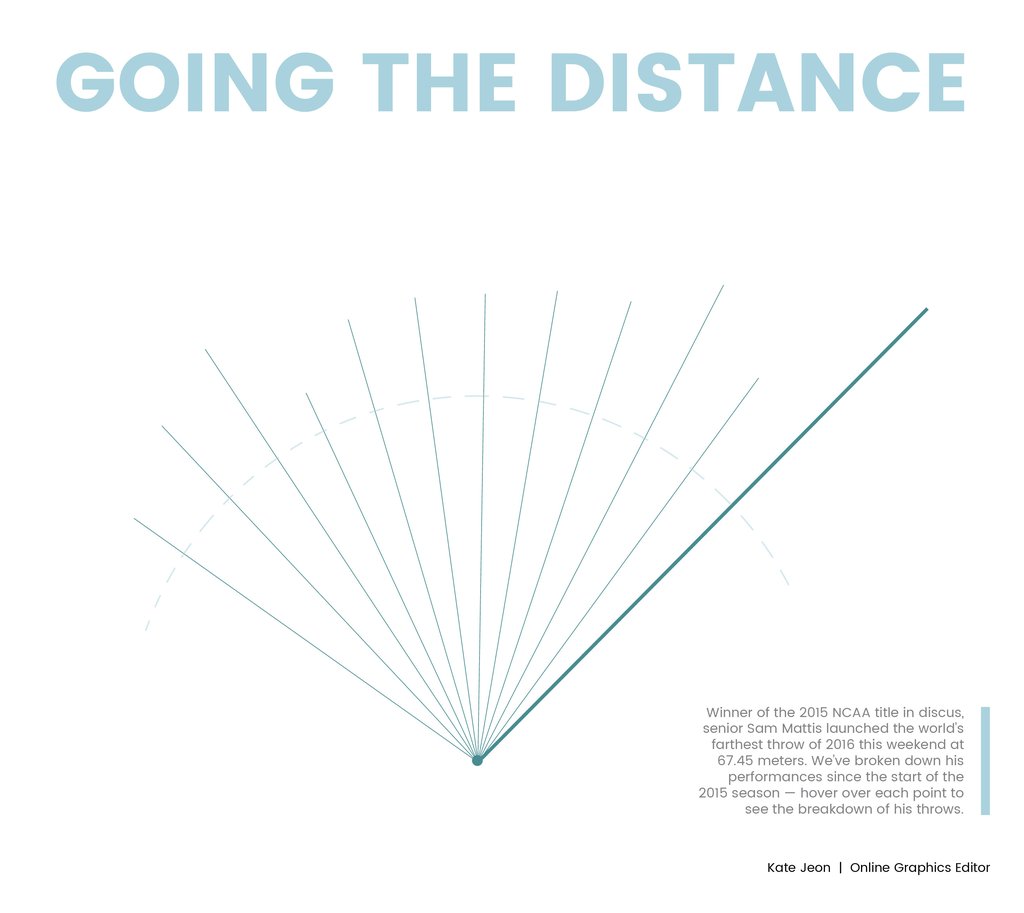 “We didn’t see this coming at all — this is something that not only moves up the timetable of this season, but also where I thought I’d be in my career,” Mattis said. “67 [meters] is something where I thought that maybe on an awesome day, I could get this year ... But now that I hit that — and I wasn’t even feeling especially great [going into the meet] — I think this season can be pretty big.”

While Mattis has already clinched a spot in the U.S. Olympic Trials after comfortably surpassing the qualifying standard of 62.00 meters, the path isn’t so easy for Awad, who still has serious work to do for a spot on the national team in 2016.

Awad’s 2015 outdoor season began similarly to Mattis’, as the distance runner set a school record with a 13:33.29 performance in the 5K — the second-best time in Ivy League history — en route to his third straight qualification for the event at the NCAA Championships.

But Awad didn’t have the same fairy tale ending, as he was ultimately unable to finish the championship race due to stress-related injury. The sting of defeat was only exacerbated by the fact that Awad’s personal best time from earlier in the season was actually faster than the time run by eventual champion Edward Cheserek of Oregon in the title race.

“I needed to take a step back from track for a little bit after that, since I was pretty disappointed because I had pretty high expectations and just kind of burned out,” Awad said. “Now, it’s been more about doing the right things to make sure that doesn’t happen again, so it’s definitely added more motivation.”

And, needless to say, Awad’s strategy has paid off so far. In February, Awad finished with a 3:57.03 performance in the indoor mile, setting the Ivy League record in the event and currently ranking eighth place in the nation among competitors of all ages in 2016.

Although Awad has not yet reached the U.S. Olympic Trials qualifying standards in the outdoor 5K (where his personal record is 5.29 seconds shy of the mark) or the 1,500m (2.68 seconds shy), the senior remains optimistic that he can hang with the best the nation has to offer in either event.

“I definitely want to go back and do well at NCAAs, and then hopefully get to the trials,” he said. “It’s going to be kind of both [events] depending on the situation — kind of 50-50 right now depending on what I can qualify for and what I’m looking better in.”

In addition to the obvious presence of strong national competition, another obstacle for both athletes could come in the form of the athletic calendar. This year’s NCAA Championships conclude on June 11. At the U.S. Olympic Trials, the men’s 5K doesn’t begin its preliminary rounds until July 4, while the discus and 1,500m competitions both begin on July 7, meaning that Mattis and Awad could be facing nearly a month without meets.

But with a chance to represent the country at stake, both Quakers will do everything in their power to don the Red and Blue once more after their collegiate careers have concluded.

“Obviously I really want to win nationals, but it’s not worth it if I’m not making that Olympic team,” Mattis said. “That’s once every four years, and that’s a huge deal, something that’s a life goal.”

“I think I should be good to peak in June, but the real peak is gonna be in July.”