Last store standing: the past and present of McDonald's at 40th and Walnut 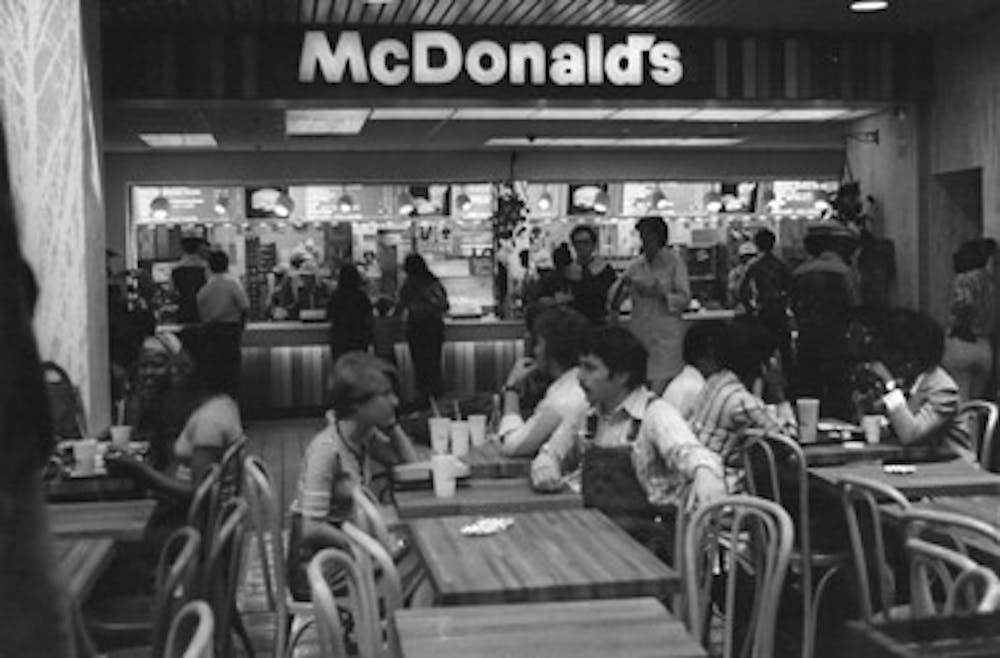 A student standing at the corner of 40th and Walnut streets in the 1990s experienced a drastically different Philadelphia than someone would today.

Where Marathon Grill stands, there was a Burger King. What is now The Fresh Grocer was a parking lot. The Rave, formerly the Bridge Cinema de Lux, wasn’t there, nor was the Radian or the restaurants on its lower levels.

The McDonald’s on the northeast corner of 40th and Walnut is one of the few things that hasn’t moved or left. But Penn officials would like to change that.

Those involved with past and present development of the corner say McDonald’s is a hot spot for crime and a source of malnutrition. Getting rid of it, they say, will bring economic growth and make the neighborhood safer.

To understand why Penn decided to redevelop the areas on 40th and Walnut streets, you would need to revisit Halloween night 1996.

At 11 p.m. that night, Penn research associate Vladimir Sled, 38, was stabbed during an attempted robbery on the 4300 block of Larchwood Avenue, just southwest of campus.

This was not the first incident of its kind at Penn, nor was it the only murder in the campus community’s memory. Just two years earlier on Aug. 29, 1994, 27-year-old graduate student Al-Moez Alimohamed was killed during a robbery at 47th and Pine streets.

But Sled’s stabbing rocked campus in a lasting way, said Barry Grossbach, who has lived within a block of the site of the murder since well before the incident occurred and was involved in the plans to develop the area.

Although Alimohamed and Sled’s deaths occurred west of campus, students didn’t have to venture far to encounter violent crimes. On Sept. 25, 1996 — just over a month before Sled was killed — then-College senior Patrick Leroy was shot at 40th and Spruce streets.

Likewise, the intersection at 40th and Walnut was “a place people were fearful,” according to Graduate School of Education professor John Puckett, who studies the development of the area around Penn and has lived in West Philadelphia for 24 years. He attributed high crime rates to dark and empty streets.

“There were a lot of factors that made people feel very unsafe,” said Vice President for Public Safety Maureen Rush, who was Penn Police chief in 1996. She cited frequent muggings, "blighted" streets and a less-than-professional escort service as examples.

Even before Sled’s murder and Leroy’s shooting, Penn faculty and staff were pushing for change.

The group Penn Faculty and Staff for Neighborhood Issues was formed in 1994 to advocate for a safer neighborhood. And after Leroy was shot, nearly 1,000 students signed a petition urging the University to increase security on and off campus.

Still, the Sled murder was a large impetus in Penn’s desire to improve the neighborhood surrounding campus, Grossbach said.

Penn could choose to isolate itself from West Philadelphia, or it could realize “that Penn would only be as secure as the neighborhoods that surrounded it,” Grossbach said. Penn’s former president and executive vice president, Judith Rodin and John Fry, respectively, chose the latter.

The ‘fly’ on the corner

By many accounts, the retail that existed around 40th and Walnut in the ‘90s attracted criminal activity.

The movie theater Cinemagic sat where the Radian Apartments does now, as did several other stores — like Baskin Robbins, Kinko’s and PNC — and many vacant spaces. The theater had “a reputation of being dangerous,” History professor Michael Katz said.

People returning to their cars at night in the parking lot on the northwest corner could expect to be mugged, Puckett recalled.

Between the McDonald’s and the Burger King that Marathon Grill replaced, “you had two anchor stores that were open to the wee hours of the morning that became crime venues because of the late-night activity,” Puckett said, explaining that “anchor stores” are those situated on the ends of commercial blocks.

By contrast, Qdoba and Marathon Grill are “strong anchors” that create stability, he explained. Strong anchor stores led to better retail between the anchors, which in turn led to increased pedestrian traffic and safer streets.

The 40th Street corridor has become a “vibrant area,” Penn President Amy Gutmann said, and a “magnet” for the Penn community.

“McDonald’s is the fly in the ointment,” Puckett said.

Penn officials have ideas for the lot’s redevelopment.

Paul Sehnert, Penn’s director of real estate development, wants to turn the property into residential space on top with restaurants and retail on the bottom, like the Radian or the Hub.

Whatever it becomes, McDonald’s is “crying out to be redeveloped,” Executive Vice President Craig Carnaroli said, citing the over $120 million Penn has invested in the retail at that intersection.

However, McDonald’s has no plans to either sell or relocate, according to a spokeswoman for the company. Since McDonald’s owns the property, there’s not much Penn can do.

McDonald’s did not respond to requests for further comment.

Despite the company’s reluctance, Penn officials expressed a desire to work with McDonald’s to find a better use for the space, said Ed Datz, Penn’s executive director of real estate. But Penn has not had active conversations with McDonald’s on the topic in over a year.

It’s not the right time to make real-estate purchases, Datz said, but “eventually market forces will compel” McDonald’s to see things their way.

To achieve its goals, Penn would likely have to help McDonald’s move, Sehnert said.

In fact, the restaurant planned to relocate in 2001, with support from Penn and the University City District. McDonald’s planned to move to 43rd and Market streets by fall 2001, according to Daily Pennsylvanian articles at the time.

“They removed so much soil … that our house’s backyard began to fall into the hole,” said Falcon, who runs the Toviah Thrift Shop at 42nd and Chestnut streets. “We simply didn’t want a McDonald’s in our backyard.”

Falcon and the activist group he founded — Neighbors Against McPenntrification — petitioned the construction. After lengthy legal battles, NAM eventually won the dispute, and McDonald’s did not relocate.

An unruly ‘gold mine’

“It brought undesirables into the campus community,” he said, referring to black West Philadelphia youth. “The safety issue is just a veil. … It’s racism.”

However, Penn officials deny that racism plays into their decision-making process. Any safety concerns are with the number of youth that gather at the venue, said Rush. “It wouldn’t matter if they were black or they were white.”

Though Falcon is not a fan of McDonald’s food, he said, the restaurant benefits area youth. It’s good for them to see the campus of a quality university like Penn, and without an affordable food option on campus, they might not get that chance.

But ultimately, he doesn’t care if McDonald’s moves or closes, so long as it doesn’t move to his neighborhood.

Professors who live in the area bemoan McDonald’s food quality.

McDonald’s “provides the worst food offerings that anyone could purchase,” Puckett said.

For the most part, the community just west of campus doesn’t eat there, said History professor Walter Licht, who lives in the neighborhood and was actively involved in past development efforts.

But students are not as critical.

“I used to go to McDonald’s a good amount of the time just because it’s cheap and convenient,” Engineering sophomore Travis McKenzie said.

He said he wouldn’t be upset if McDonald’s leaves 40th and Walnut because there’s another McDonald’s at the Hospital of the University of Pennsylvania, adding, “I like the idea of having one kind of close to campus.”

McKenzie clearly isn’t alone. On weekend nights, the restaurant fills with local youth and Penn students alike, all clamoring for a late-night meal.

“That will be one of the last McDonald’s standing if they ever go under,” Grossbach said. “It’s a gold mine.”