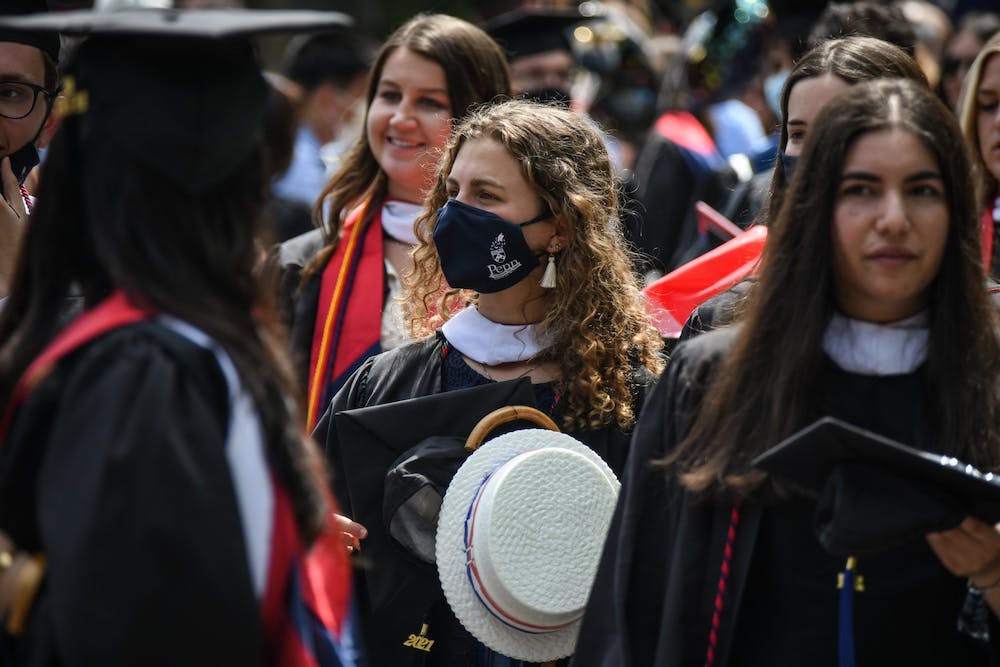 A graduate wearing a specially-made mask for the Class of 2021 exits Franklin Field after the commencement ceremony on May 17.

Credit: KYLIE COOPER
PHOTO ESSAY
In Photos: Celebrating the Class of 2021 with a commencement unlike any other
By KYLIE COOPER and JESSE ZHANG 05/18/21 1:10am

On Monday, the Class of 2021 joined a long line of graduating classes in concluding their time at Penn as undergraduate students. While many classes have preceded them, their experience is unique. After having their junior year suddenly cut short by the COVID-19 pandemic in March 2020, they never returned to the classroom and have now completed their final two and a half semesters virtually. While the Class of 2020's commencement was moved online and an in-person event is yet to be rescheduled, the Class of 2021 was able to have a socially-distanced celebration in Franklin Field.

Unlike past ceremonies, families and friends were not permitted to attend this year's commencement in-person due to health and safety guidelines. However, many of them traveled to Philadelphia and watched the livestream from their devices in various places throughout campus. Here's what this historic commencement ceremony looked like.

Students checked into the commencement ceremony at a tent on Shoemaker Green. All students had to show green PennOpen Passes in order to be allowed into Franklin Field.

Allan Rao, father of Wharton and Engineering graduate James Rao, watched the livestream of the ceremony on his phone while sitting near College Green.

Upon entering Franklin Field, graduates were given red bags that contained Hey Day skimmer hats and canes. While Hey Day is a long-standing tradition held at the end of students' junior year, it was cancelled for the Class of 2021 last year due to the pandemic. At the beginning of the ceremony, they were officially pronounced seniors by Penn president Amy Gutmann.

People of all ages came to Philadelphia to celebrate with the graduates.

Though parents usually have commencement booklets, copies of The Daily Pennsylvanian’s graduation issue, and cameras at hand, this year, a mask was added to the package.

The ceremony lasted one and a half hours, ending around 11:30 a.m. The graduates poured out of Franklin Field, but were prevented from uniting with their friends and families right away because of barricades and security guards.

Many graduates, families, and friends didn't wear masks, given the CDC's new guidelines for fully vaccinated people. For many, this year's Commencement marked the beginning of a return to normalcy.