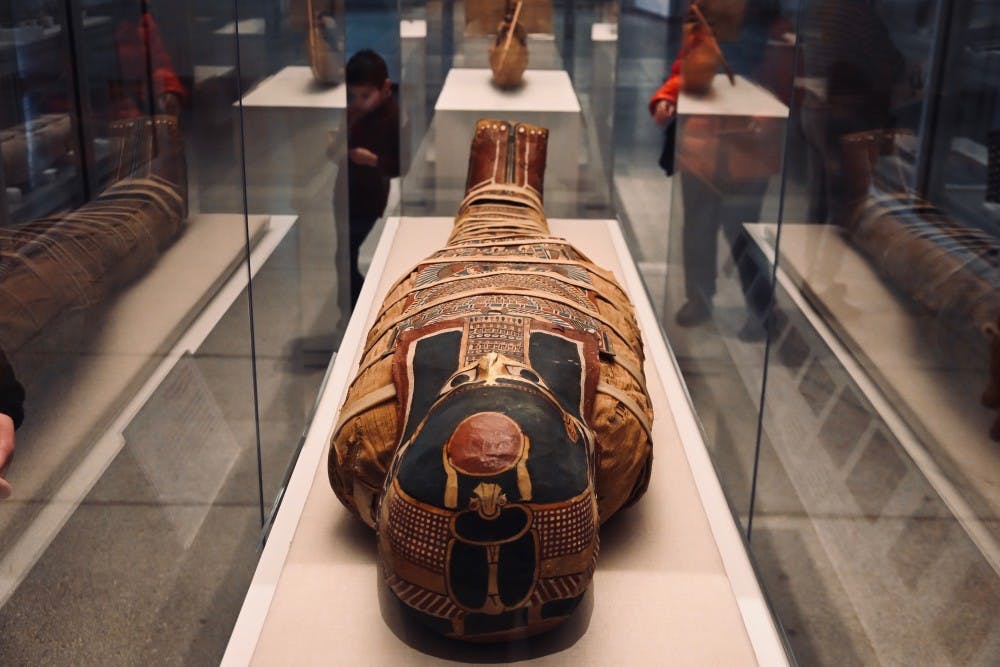 The three-part exhibit, titled “Ancient Egypt: From Discovery and Display,” features more than 200 artifacts, many of which have have never been shown to the public before. Scattered throughout the exhibit are plaques explaining both the history behind the artifacts and how Museum conservators preserved them.

Head Conservator Lynn Grant said the exhibition was designed to give visitors a taste of the Museum's Egyptian artifact collection while its two main Egyptian galleries are closed. This year, many Egyptian artifacts were moved into storage due to nearby construction of the Pavilion at the Hospital of the University of Pennsylvania.

The Lower Egypt gallery, which houses the largest sphinx statue in North America, is already closed, and Grant said the Upper Egypt gallery will close in the summer. The Museum is also undergoing extensive renovations of its own, which will be completed in 2021.

“Our Egyptian collections are pretty much our most popular with visitors," Grant said. “One of the things we wanted to do was maintain an Egyptian presence."

Featured artifacts include a model of a pharaoh’s palace from Memphis, Egypt, a turquoise ceramic-ware necklace, and multiple mummies,, including one of a man and his dog. These are just a few of the Museum's 50,000-item collection of Egyptian artifacts, only 5 percent of which have been on display before. Grant said she hoped this exhibit would cultivate interest for the Museum’s main Egyptian galleries when they reopen in 2022. The new exhibit will feature a pharaoh's palace complex that is being installed on the Museum’s third floor.

Visitors can also watch Museum conservators in action in the “Artifact Lab” located in the third part of the exhibit. The Artifact Lab is a glass display which opens into a room where conservators work, allowing visitors to ask them questions and try out some of the equipment for themselves.

Grant said the Artifact Lab, set up six years ago, has been a popular feature at the museum. She said the Lab works on artifacts from many different cultures, giving visitors the chance to see them all.

“It was only supposed to be a one-year exhibition, but it’s been so popular that it’s still going strong,” she said.

Grant added that the new display was put up with "minimal curation" — instead of each artifact having its own explanatory plaque, groups of artifacts are described by general plaques.

"A lot of the objects are shown with minimal information, but people can see them,” Grant said.

Visitors said they appreciated the different format the exhibit offered.

"You don't see the history from where the archaeologists first discovered it and to how it came into the Museum," Philadelphia resident and exhibit visitor Anne Evans said. "This is a glimpse into a part of these types of artifacts that you normally wouldn't have, so I think it's a very creative idea."

"I like seeing the different artifacts come in, because Penn probably has one of the most robust collections from Egypt," exhibit visitor Adam Nelson said. "Being able to see how our cultures have changed over time, how our civilization has come throughout time — I think it's incredibly important to educate yourself in that."