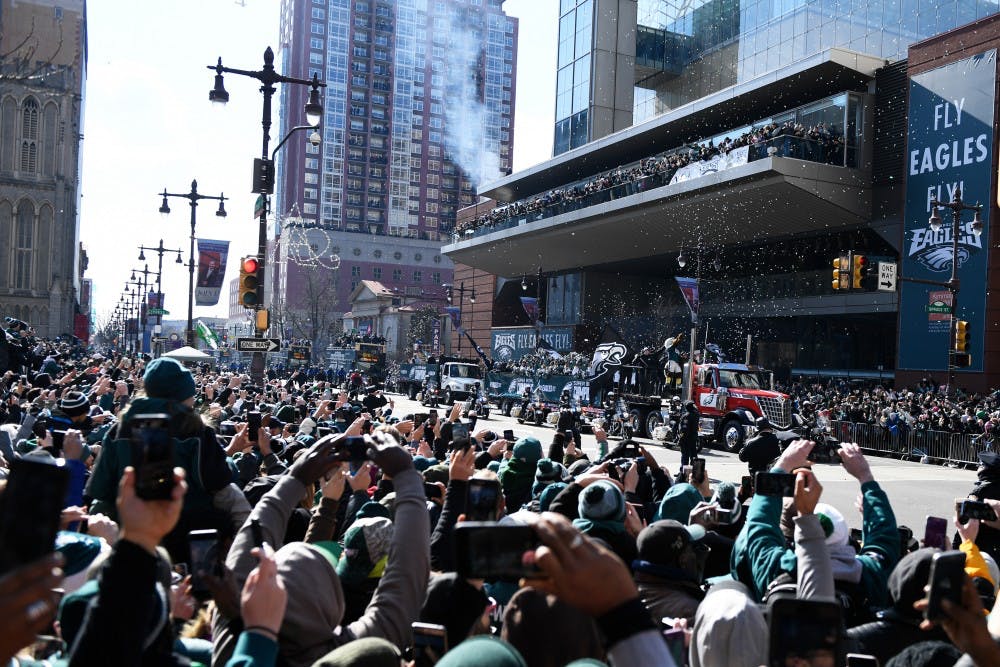 In 2018, students stormed into Center City when the Eagles won the Super Bowl, threw a "throwback show" for Spring Fling, and planned a (failed) protest against the decision to close Huntsman Hall early. Take a look back at this past year in photos.

Thousands of activists marched through Center City on Jan. 20 for the second Women's March on Philadelphia. The rally in Philadelphia was one of dozens that were held around the country to demonstrate the persistent critiques on President Donald Trump and his administration. The massive group of participants consisted of people of all ages and pets.

Following allegations of sexual misconduct against Steve Wynn, Penn announced on Feb. 4 it would revoke his honorary degree and remove the name "Wynn Commons" from the outdoor space outside Houston Hall. A few days prior, the name "Wynn" underneath the large seal was vandalized and later covered with a metal rectangle.

The Philadelphia Eagles earned their first-ever Super Bowl title on Feb. 4, defeating the New England Patriots 41-33 in Minnesota. Following the conclusion of the game, Philadelphians took to the streets to celebrate. Fans were seen climbing traffic lights and tipping cars. "It’s just so amazing. You want to be part of the history," said Wharton senior Isabela Peralta, who is originally from Costa Rica.

After the Eagles' historic victory in Super Bowl LII, Philadelphia celebrated their win over the Patriots with a parade. Eagles fans poured across the streets of Philadelphia as Bud Light distributed free beer to those of age. The parade concluded at  the Philadelphia Museum of Art, and many Penn students took the trip across the river to join. College junior Nate Wilson said that he “grew up in Philly, so this is a very big deal for me.”

Blaze Bernstein, College sophomore, was found dead near his home in Orange County, CA on January 9th. The homicide was allegedly committed by his former high school classmate, Sam Woodward, who has been found to have ties to a neo-Nazi hate group. The Kelly Writer's House, a spot where Blaze spent much of his time on campus, hosted a vigil where his friends, siblings, and parents attended. After moving out Blaze's belongings from his apartment, his parents, Gideon Bernstein and Jeanne Pepper, set up a memorial fund in his honor.

After defeating Harvard in the Ivy League Tournament championship game, Penn men's basketball booked its ticket to the NCAA tournament for the first time in 11 years. Senior guard Darnell Foreman led the Quakers to victory by scoring a team-leading 19 points, and he celebrated the occasion in memorable fashion by sitting on the rim and waving the net around. The Quakers would go up against Kansas in the first round of March Madness, but they were unable to upset the top-seeded Jayhawks and move on to the next round.

At Philadelphia's March for Our Lives on March 24, thousands of students, teachers, and Philadelphia residents marched through Old City to protest rising gun violence. The "March for Our Lives" movement started on Feb. 14 following the shooting at Marjory Stoneman Douglas High School in Florida.

SPEC hosted CupcakKe, Sage the Gemini, Jojo, and All-American Rejects during this year's Spring Fling Concert. This was the first Spring Fling not be hosted in the Quad, and also the first to not span over two days. However, students still enjoyed the celebrity and student performances hosted all day at Penn Park.

Franklin Field hosted the 124th running of the Penn Relays. People traveled from around the world to participate in this 3-day track and field event, which featured high school, college, and many Olympic athletes. Olympic gold medalist Justin Gatlin, the biggest name that competed at the event, said that "this is the only kind of crowd in America or in the world that’s gonna show you really what the community of track and field really is" when speaking about the atmosphere of the Penn relays in an exclusive interview with The Daily Pennsylvanian.

Members of the Class of 2018 celebrated their Commencement at Franklin Field on May 14th. This year's speaker was NBC News anchor and 1967 College graduate Andrea Mitchell, who spoke about the importance of facts. "Fearless journalism is essential to sustaining our democracy," she said.

Wharton Dean Geoffrey Garrett announced the 2 a.m. nightly closure of Huntsman Hall on August 23rd in an effort to emphasize student wellness. Students organized a protest in response, but only a handful of students showed up despite over 300 people marking themselves as "going" on Facebook. "We're still going to have the same amount of work to do whether we're studying in Huntsman or not," said Wharton junior Rahul Subbaraya.

Houston Market reopened on August 28th after a $15.15 million renovation that brought new food vendors, ordering kiosks, and a brighter seating area. "People are going to see a dynamic change in the space," said Barbara Lea-Kruger, the spokesperson for Penn Business Services.

Students lined up outside of polling stations all day November 6th to vote in this year's congressional midterm elections. As results were pouring in, many on-campus student groups hosted viewing parties and commented on the results. College senior Richard Murphy, College Republicans' interim president, stated, “Coming from a Penn perspective, seeing what I am seeing, there is a lot of anger from the left, and anger does drive votes." In the end, Murphy was right, as Democrats took the House and Republicans the Senate.

1996 College graduate Michael Avenatti entered the national spotlight as the lawyer for adult film star Stormy Daniels. Avenatti spoke at two events on campus in November, calling Trump "a moron on many things." Days later, he was arrested following allegations of domestic violence and announced he would not run for president in 2020.

Penn men's basketball defeated Villanova, 78-75, for the first time since 2002. The Quakers pulled off the upset in dramatic style, relying on late free throw shooting and stingy defense to secure the victory. The Palestra showed why it is known as the Cathedral of College Basketball; a packed house supported the Red and Blue vehemently, chanting and screaming throughout the contest. The fans celebrated after the final buzzer by rushing the court and mobbing the players.