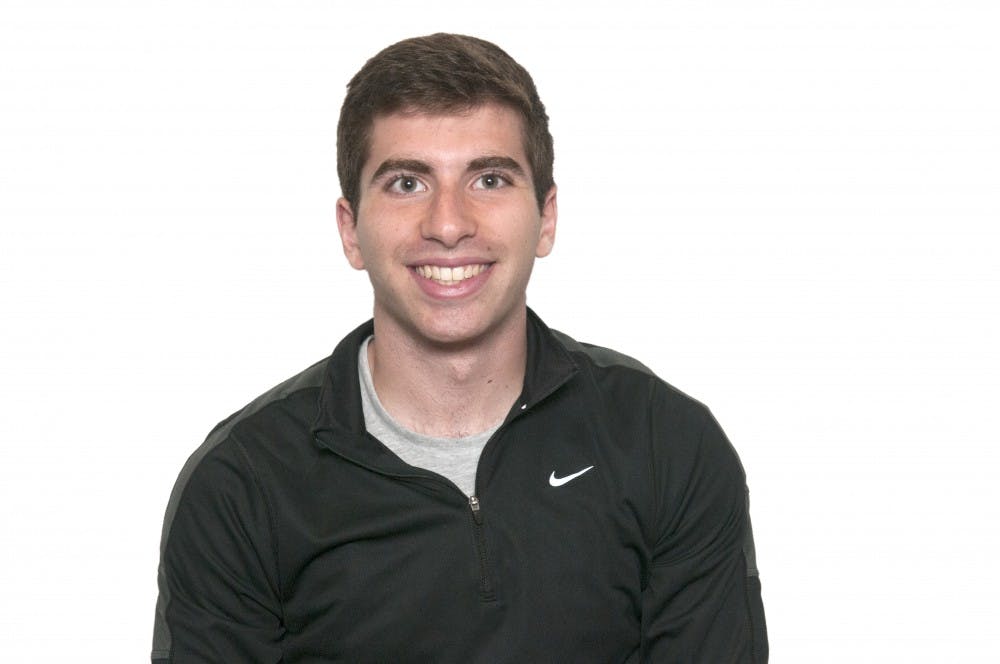 After spending more than a year writing a thesis on Farewell Addresses, I would have figured I’d have some idea how to say goodbye. But, like so many times these last four (really, 22) years, I’d be dead wrong. Instead, I’ll just say thanks.

You could have told me four — or even two — years ago that I would be sitting here and writing a farewell column for the DP as a washed-up senior sports editor, and I would have laughed and walked away. This was an adventure that happened basically by accident.

When I joined DP Sports my junior year, I wanted to try to get more people to care about Penn Athletics. I quickly realized it wasn’t going to happen.

All I could do was keep telling stories — and try to do it well. It wasn’t just what happened on the court that mattered. Penn athletes do more than play sports; they’re our friends, neighbors, classmates, and colleagues. Their stories matter to us for bigger reasons than just the names on their jerseys.

People read about sports because they provide the sense of shared experience that seems to be missing in so many other parts of campus today. There’s beauty in the ordinary — we see that in the profiles and features and recaps that tell the narrative of Penn athletes’ everyday lives. They’re students and athletes and interns and work-studies, and that’s why their stories matter. They’re just like us.

In the last two years, I got to tell a lot of other people’s stories. In the process, I wrote my own.

I’m not just talking about the places I got to go and games that I got to see, though those experiences have been unforgettable. As you spend time on the road with the people you cover, interview them before and after games, sit in their offices, and share their deeply personal stories with the world, it’s impossible to walk away unchanged.

When I profiled women’s basketball’s Mike McLaughlin, I thought it would be as cut and dry as any other story. But as I talked to players and assistants and sat in the offices in Hutch, I established trust and forged relationships in ways that made me a better reporter than I could have imagined.

At one point I asked McLaughlin what he wanted people to say about him and his program when all was said and done. Quietly, almost inaudibly, he responded with something that shaped my entire approach to journalism: “Hopefully the wins and losses are closer to the end of the story, that it’s not the beginning of it.”

I realized that was what I wanted to do with my time as senior sports editor. As a sportswriter, it was my job to report the wins and losses. As a journalist, it was my job to do much more. It’s effortless to go online and find a box score for any Penn game. I was there to tell the story, not just the score.

When I sat down to tell the life story of the inimitable BG Lemmon, I’m not sure I even asked a question. We took over his coach’s office and he just started talking.

It was the last story I wrote as senior sports; it was also the most read. To be sure, most of that is because of BG’s sheer force of personality. But as I was writing it, something unusual happened. I realized that I was at the end of a journey just as much as BG was approaching the end of his own career.

In BG’s story, you can see every one of the other articles I wrote that year. That last feature was the culmination of everything else I had done as senior sports. I closed out my tenure with the best piece I ever wrote — because my own journey was reflected in BG’s.

These things — the impacts of these stories — happened in such a way that I simply didn’t foresee as part of my path at Penn. Time and again, that’s been the case. The best things that have happened to me here are the ones that I never anticipated.

And so much of that journey played out for me as it did because I decided I wanted to spend my time here telling other people’s stories. None of that would have happened without others’ faith in me and the incredible people I’ve gotten to share the last few years with.

Thank you to Matt and Genesis, for inexplicably making the decision to hire me at the DP and changing my life in the process, and to Riley for having so much faith in me despite being the toughest possible act to follow.

Thank you to Will, you’ve been a worthy successor. Keep the faith. Be assertive.

Thank you to Ilana and Alex and Ananya for at least making even our worst content look amazing.

Thank you to Mike McLaughlin and Ray Priore, Gilly Lane and John Yurkow. Not every coach gets it. You guys do.

Thank you to BG and Laine and PWBB for making me a better writer — and making sure I had a little fun along the way.

Thank you to all the athletes and coaches who answered my shitty questions and always responded to my phone calls and texts. I’m not a great writer now, but I was even worse two years ago. You still gave me a shot.

Thank you to Brooks and Hayes and all the other Fries too innumerable to name that have made this last year at Penn the best of my life. You’re all incredible. Except Frances.

There are more people to thank than I have the space for, and that fact alone reflects just how lucky I’ve been in my time here.

In the last two years, there was frequently the late night in the office, the tough loss to recap, or the long drive from Dartmouth. It wasn’t always easy, but it was never hard. The people around me made sure of that — athlete, coach, parent, sportswriter alike.

I was telling other people’s stories but at the same time writing my own. You all made it possible. You sat for interviews, you gave advice, and, occasionally, you even read a story or two.

Thanks for all of it.

NICK BUCHTA is a College senior from Olmsted Falls, Ohio, studying communication & public service and political science. He served as the senior sports editor on the 132nd board. Previously, he was an associate copy editor.