Quakers had 16 turnovers and gave up 18 offensive rebounds. 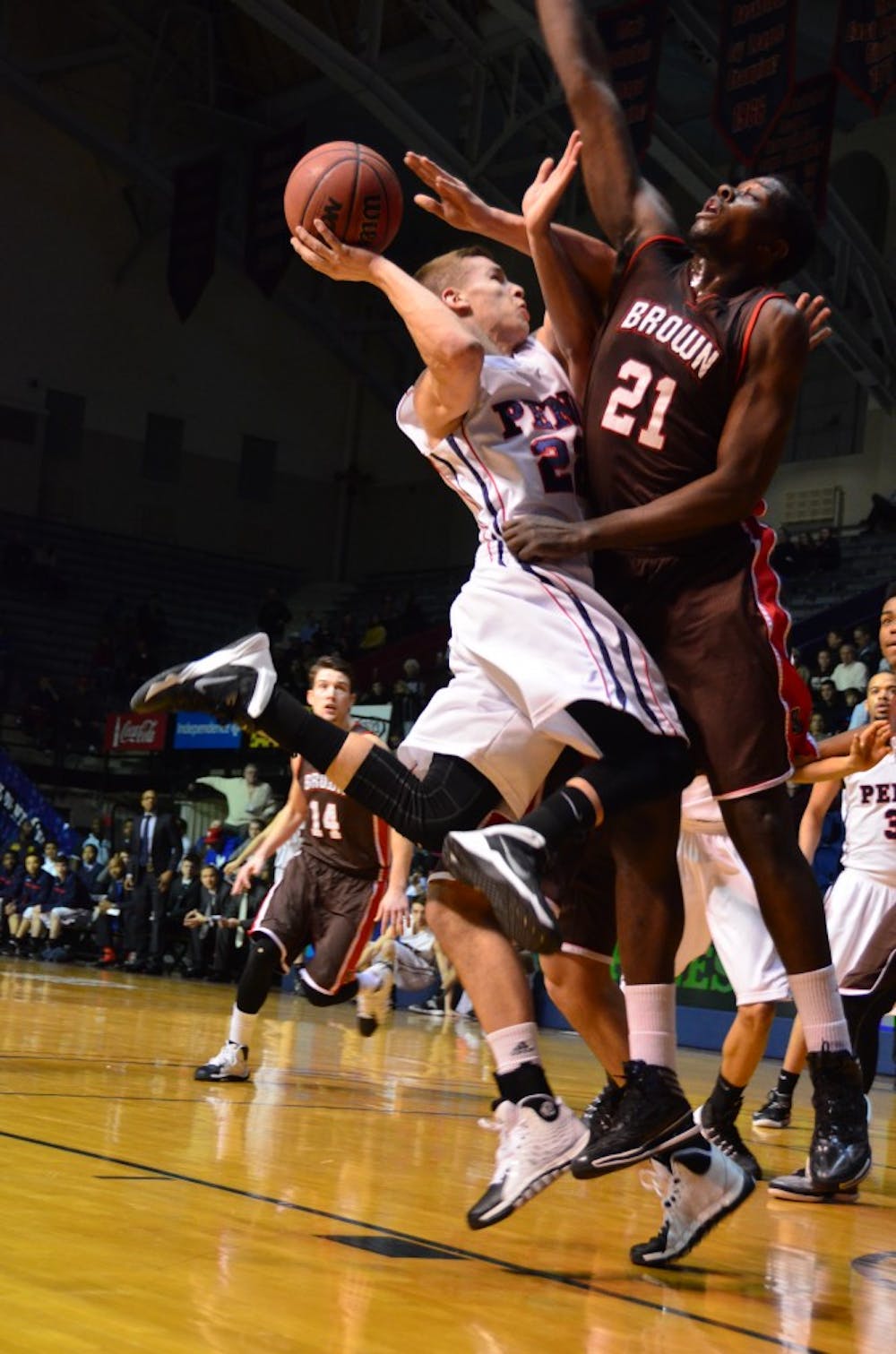 That’s been the story of the season for Penn men's basketball, and it certainly was the story in Friday night's 76-67 loss to Brown.

In its seniors’ penultimate home contest, Penn (7-17, 4-6 Ivy) could not overcome another barrage of turnovers and poor free throw shooting. The Quakers shot just 12-for-22 from the line and coughed the ball up 16 times.

Penn, a team that trailed by double digits for stretches of the contest, forced some late turnovers to get within five points in the final minute of play, but could not complete the comeback bid.

On the other side, Penn sophomore guard Tony Hicks played with an aggressive edge, demanding the ball on the offensive end and was attacking the rim at will. The Red and Blue's leading scorer had 17 points in the first half to keep the Quakers in the contest.

“I came out and tried to be aggressive, see what I could get,” Hicks said.

Other than the electrifying Hicks, it was a spike in defensive intensity that kept the Quakers in the contest early on. The Red and Blue started to press midway through the half and clamped down on Brown’s jump shooters.

Consequently, the Quakers held guard Sean Mcgonagill, Brown’s leading scorer, to just four first half points. Kuakumensah also cooled off and did not score in the final 15 minutes of the first frame.

Though Brown didn't attempt a free throw in the first half, it did get 14 points off the bench before the break, and led 37-33 midway through.

Penn's frontcourt duo, senior forward Fran Dougherty and sophomore center Darien Nelson-Henry, were quiet in the first half, scoring only four points combined before the break.

“We didn’t have any poise or patience offensively,” Allen said. “Guys didn’t fight in the paint or try to be physical and fight through contact.”

But Dougherty became more assertive out of the second half gate, scoring six quick points to pull the Quakers within four. Junior Henry Brooks then hit a jumper less than a minute later to make the score 45-43.

Brown would not go quietly, however. The Bears used a 10-2 run over the next four minutes to put some distance between them and the Red and Blue.

Penn was not helped by the fact that Hicks cooled down for the majority of the second half, only scoring one basket in the final period’s first 10 minutes.

“They adjusted,” Hicks said. “They were giving up the big men on a lot of down screens, so that’s a pass that needed to be made.”

Down 11 with eight minutes left, Miles Jackson-Cartwright executed a steal and coast-to-coast layup sequence to bring the Red and Blue within nine that looked like it might finally spark a Penn comeback.

But the Quakers' Achilles heel resurfaced at the worst of times, as the Red and Blue committed turnovers on the following three possessions.

Brown capitalized and took a 63-50 lead with under seven minutes left, and didn't look back.

The Quakers were able to muster a late surge, forcing multiple turnovers and scoring in transition to keep the deficit under 10. Hicks hit a three with 1:15 left to make the score 68-61, and Jackson-Cartwright then followed a Hicks miss to cut the lead to five with just under a minute remaining.

No heroes emerged, however, and the Quakers ultimately came up short.

Tomorrow night’s home matchup against Yale will be Senior Night and Penn's final home game of the 2013-14 season.

“As painful as tonight was, I think it’s overly important to have selective amnesia and try to get ready for Yale,” Allen said. “We’ve got our work cut out for us.”