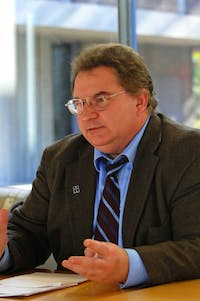 Yesterday, professors John DiIulio, Jr., Neil Malhotra and John Lapinski, all of whom teach political science, gathered as a panel to explain the results of the recent elections and forecast the future of U.S. politics for students and faculty.
11/03/10 4:19am

This year marks the 40th anniversary of the institutionalization of the Newman Center.
11/01/10 3:51am

On Saturday, PAACH held a homecoming reception marking its 10th anniversary. The event was catered to students and alumni involved with PAACH, who gathered in the ARCH building lobby to discuss their experiences.

On Friday afternoon, a panel titled “A Post-Racial Society in the Age of Obama: Fact or Fiction?” kicked off the first annual Penn Spectrum conference — an alumni gathering focused on recognizing the University’s diversity.

As a part of the University’s Year of Water initiative, student groups congregated to clean up trash along the shore of the Delaware River at Neshaminy State Park.
More Articles

DALLAS -- It was a glorious media day today at the American Airlines Center. I've got to give Mark Cuban and the rest of the guys behind this arena all the credit in the world.
02/24/06 9:26am

The Penn-Princeton rivalry belongs to the Quakers ... in February and March, that is. The Penn men's basketball team is 8-1 in its last nine against the Tigers, and the gap is widening. But sometime around the middle of March, the edge moves north to Princeton, in a big way. In the 10 spring sports with Ivy standings or an Ivy League tournament, the Tigers finished in the top half of the standings in nine sports last season, including three titles. Meanwhile, the Quakers went without a title last spring and finished seventh in three of its highest profile spring sports - men's lacrosse (in which there are only seven teams) baseball and softball. The tennis teams have already begun their spring seasons, and lacrosse opens this weekend.
02/14/06 5:51pm

Anything but Uniform: Princeton

This is the last new opponent Penn will be playing this regular season.And here's a look at the Princeton road uniforms.It's pretty much the same template as Cornell's red jerseys.
02/12/06 12:29am

Would the last one out please turn off the lights?

CAMBRIDGE, Mass. -- As those of you in Philadelphia know full well, the Northeast corridor is getting whacked by a big snowstorm this evening.
02/08/06 12:39am

Back in the 1960s, there was a popular genre of Soul music called the Philly Sound. These days, though, the Philly Sound is the roar that can only be found at a Big 5 game like the one that took place this evening between Villanova and Saint Joseph's.
02/03/06 9:47pm

The good, bad and ugly from this Ivy League Friday

Anything but Uniform: St. Joe's

For the first time this year, Penn will be playing a team that has two away uniforms. The Hawks have their standard black, and the alternate red.The Hawks did wear the red in their last game against Saint Louis, which St.
01/23/06 9:24am

Normally we use this forum to discuss things that surprise us from the world of Penn, Ivy League and Big 5 sports. But I've decided it's time to discuss something remarkably unsurprising. Over the weekend, one of the many teams I have covered during my time at the DP -- the women's squash team -- recorded a pair of 9-0 wins over No.
More Posts