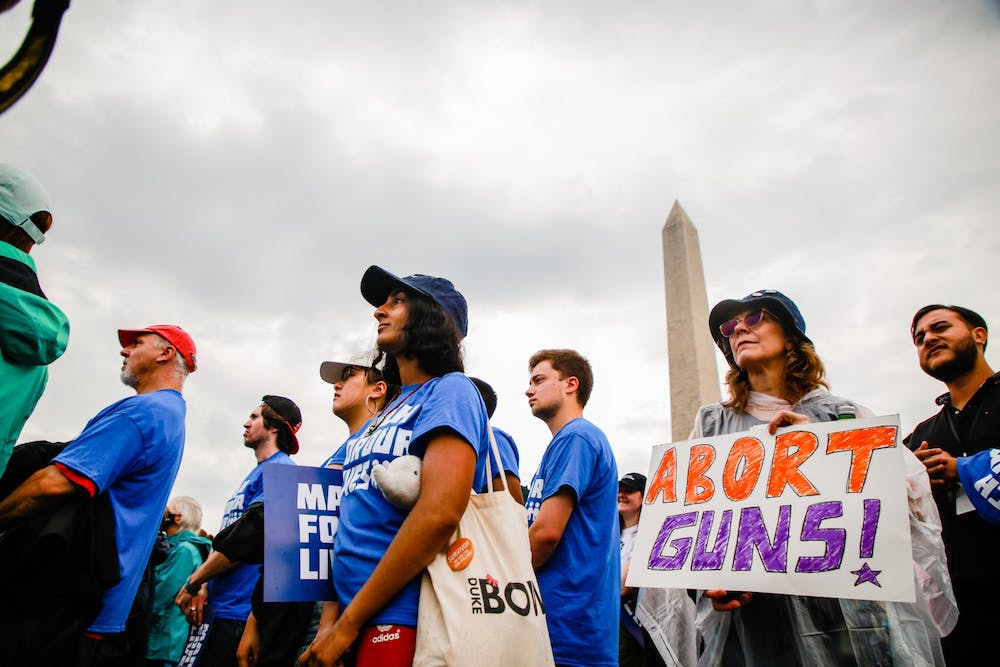 Credit: JESSE ZHANG
PHOTO ESSAY
In Photos: In the wake of mass shootings nationwide, March of Our Lives returns to D.C.
By ANA GLASSMAN and JESSE ZHANG 06/14/22 9:57pm

Students, teachers, families, lawmakers, and many others gathered on the National Mall of Washington D.C. on June 11, 2022, to protest the recent acts of gun violence around the United States. The first March for Our Lives protest took place in the wake of the Marjory Stoneman Douglas High School shooting in Parkland, Fla., in 2018. With chants, tears, and a wide range of emotions running high, here’s a look into the March for Our Lives rally last Saturday.

An estimate of over 40,000 people gathered on the National Mall by the Washington Monument at noon.

Attendees included people of all ages,

all chanting in support of gun control legislation.

David Hogg, co-founder of March for Our Lives and survivor of the Parkland shooting, asked the crowd to think about one person that they love. He then asked them to imagine their loved ones’ names on a growing list of victims of gun violence. In an interview with The Daily Pennsylvanian, Hogg said “We aren't just an organization that just tries to take everybody in. We've tried to build as many megaphones as you can, saying the same thing instead of just trying to be a giant megaphone. We're trying to build a movement.”

Rep. Cori Bush (D-Mo.) recalled her own experience with gun violence with a previous abusive partner. She called out her Republican colleagues in Congress and urged them to act in support of gun control legislation.

Protesters held up signs against gun violence and other recent issues such as racism, reproductive rights, and more.

The crowd was asked to observe a moment of silence in remembrance of all the lives lost due to gun violence.

X González, activist and survivor of the Parkland shooting, spoke directly to legislators:“We saw you cash those checks, we know that you know gun violence is an issue, we brought the topic to you with international attention and resources four years ago. We as children did the heavy lifting for you. Act your age, not your shoe size.”

Names and photos of victims of gun violence were strung along the metal barriers, acting as a stark reminder of the gravity of the issue at hand.

A display of tens of thousands of flowers by former Rep. Gabby Giffords (D-Ariz.), a survivor of gun violence, stood next to the rally representing lives lost to gun violence.