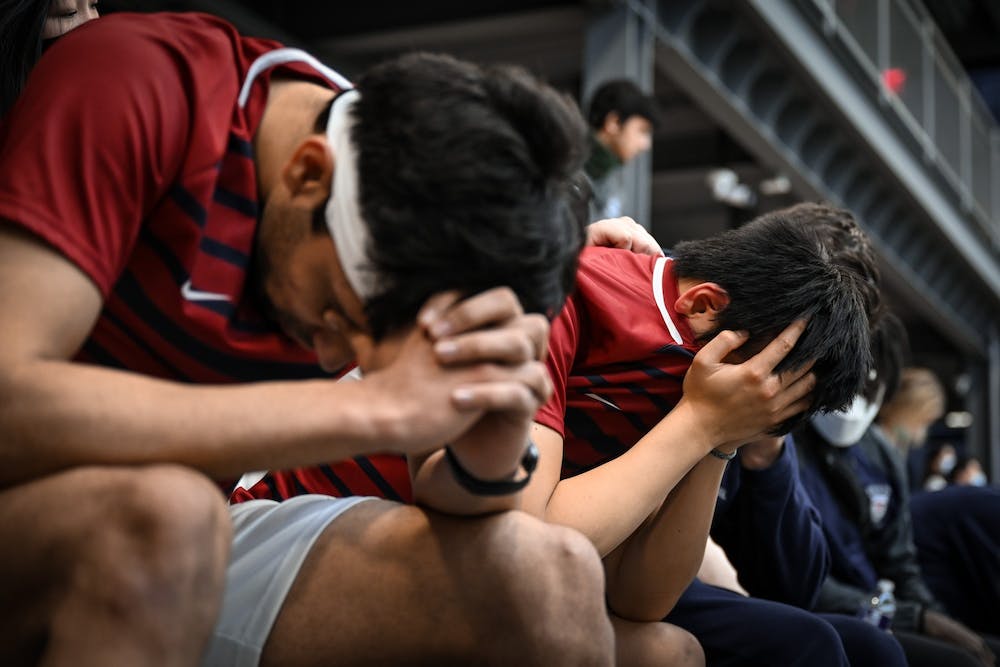 This past Sunday, when all the pressure of the National Collegiate Squash Championships seemed to weigh heaviest on one of the youngest players in its lineup, Penn men's squash demonstrated its strongest team bond from behind the glass of Court 3 at the Penn Squash Center. And in spite of the freshman's toughly battled but heartbreaking defeat that would occur before them, the Quakers proved that even a loss in the final of perhaps the most anticipated competition of the season would not threaten their team unity.

Freshman Nathan Kueh was due to face Harvard's Ido Burstein in the final game of the tournament that would determine the champion of the Potter Cup, as he stepped onto Court 3 with compelling confidence and courage in his gait. After a brief pep talk with coaches Gilly Lane and Jack Wyant, Kueh was escorted by his teammates who had already finished their own matchups and were lined up ready to push full support behind the freshman.

Kueh's determination was tangible to the crowd, which stood mere feet from the glass as he shut the door behind him. The Penn home fans returned vocal support at a volume more familiar to the neighboring Palestra.

The freshman had every reason to hold up his admirable confidence. The previous two days had panned out to the Quakers' plans: Friday, a 9-0 sweep of Drexel; and Saturday, a solid 6-3 semifinal win against Yale. Penn played before a crowd packed to the second-floor viewing area of the Penn Squash Center, and cheers from students and home fans erupted constantly.

Penn's battles occurred on Courts 2, 5, and 6 versus Drexel, and Courts 1, 3, and 4 through the remainder of the weekend. Court 2 belonged to graduate student Andrew Douglas, senior Aly Abou Eleinen, and sophomore Nicholas Spizzirri as they each took wins on day one against Drexel. Senior James Flynn then joined Douglas and Eleinen on Court 1 against Yale and Harvard.

With characteristic poise, Douglas took out his first opponent of the tournament in just eight minutes for a 3-0 win against Drexel's Lucas Rousselet. His win against Yale the following day went to four matches, a game that turned all attention of the packed Center toward Court 1.

Eleinen took both of his wins of the first two days in five matches, each with an intensity that spanned the whole court. But his high-energy tempo could not break down Harvard's Marwan Tarek; a fellow Egypt native, who served Eleinen his first defeat of the season with a 3-0 game.

Court 1 saw no better luck following Eleinen, as Flynn fell to Harvard in the same manner, 3-0. Flynn had fought 1 hour and 15 minutes the previous day against Yale, pushing to five matches before confronting defeat, 3-2.

But on the opposite side of the viewing stands, Courts 3 and 4 entertained redemption arcs and intense wins for Penn.

Junior Dillon Huang and graduate student Yash Bhargava both took 3-0 wins against Yale. Huang pulled a 3-2 win against Adam Corcoran of Harvard the following day after soldiering through a 1 hour 35 minute battle. Several teammates crowded behind the glass in full encouragement of their teammate as the game inched on.

Junior Saksham Choudhary and freshman Roger Alber Baddour were the only Penn players to complete a 3-0 against Harvard, their wins vital to keeping the Quakers' hopes alive.

On Saturday, Kueh's semifinal game against Yale had also drawn some of the loudest support of the competition, as the freshman came back from trailing 2-0 to steal three straight matches.

By the time Kueh was warming up for his final game on Sunday, Courts 1 and 4 had already completed their matchups, and the score between Penn and Harvard stood even at 4-4.

Kueh put up a valiant effort most representative of the Quakers' historic season, but the challenge was too steep. He finally surrendered the loss at 3-0, and was met with the support of the whole team on the other side of the glass.

While its first loss of the season may be one to dwell upon, Penn men's squash's incredible undefeated run will not be redefined by one defeat. A feat achieved with tremendous character, talent, and effort, the team's 2021-22 season will endure as one of the greatest representations of top sports achievements at Penn.