West Philadelphia’s median market value has increased significantly from 2015 to 2021, making it more difficult for current residents to remain in their homes.

Market value and the total taxable land increased more in University City compared to other areas of Philadelphia from 2015 to 2021. Experts in urban studies and city planning have partly attributed the general rise in property value to the University's actions, such as building new residential and academic buildings, adding increased security surrounding the campus, and building the Penn Alexander School, a University-assisted, K-8 public school for West Philadelphia children.

The Daily Pennsylvanian Analytics Staff used data on home market values and average taxable land from OpenDataPhilly and the Internal Revenue Service collected from 2015 to 2021 to perform the analysis. The analysis includes data from the 19104 zip code — which includes Penn's campus and is considered University City — and the 19102, 19103, 19106, and 19107 zip codes in Center City. These were chosen on the premise that comparing to immediate surroundings would help normalize for other factors (demographics, income, etc.).

Home market value — which is the estimation of a home’s worth by the Philadelphia City Council, and taxable land — which is the value of land that an individual pays taxes for, were the primary indicators of change in housing value in 19104 from 2015 to 2021.

Year-to-year changes in property value between the current year and the previous year are shown on the above density map, with "current years" ranging from 2016 to 2021. In almost all years, property market values increased in many areas including west of 40th Street, north of Powelton Avenue, and many properties close to Penn’s campus between Market and Spruce streets and 34th and 40th streets.

Experts pointed to several potential reasons behind this increase in market value, including Penn's investments and the expansion of Penn Police.

Ira Goldstein — a lecturer in the Urban Studies program and the Director of Policy and Information Services at The Reinvestment Fund, a community investment group that invests in affordable housing — credited the founding of the Penn Alexander School as one factor that caused a "big change in the trajectory of real estate prices."

The Penn Alexander School — a K-8 public school — was founded in 2001 as a partnership between the University of Pennsylvania, the School District of Philadelphia, and the Philadelphia Federation of Teachers.

John Landis, a professor emeritus of City & Regional Planning at the Weitzman School of Design, said that the University’s expansion of Penn Police into West Philadelphia contributed to an increased sense of safety among residents and caused a spike in property values.

After Penn Police became a fully-fledged police department in 1975, their patrol zone expanded from 40th Street to 43rd Street. Landis said this perceived increased safety pushed families who were employed at Penn to purchase and renovate West Philadelphia homes up until the housing crisis in 2008.

Penn Police currently patrol north to south from Market Street to Baltimore Avenue and east to west from 30th to 43rd streets, and the department has also recently faced allegations by Black students and alumni for racial profiling.

The University also expanded its Home Ownership Services program — which encourages employees to buy homes in West Philadelphia — in 2014. 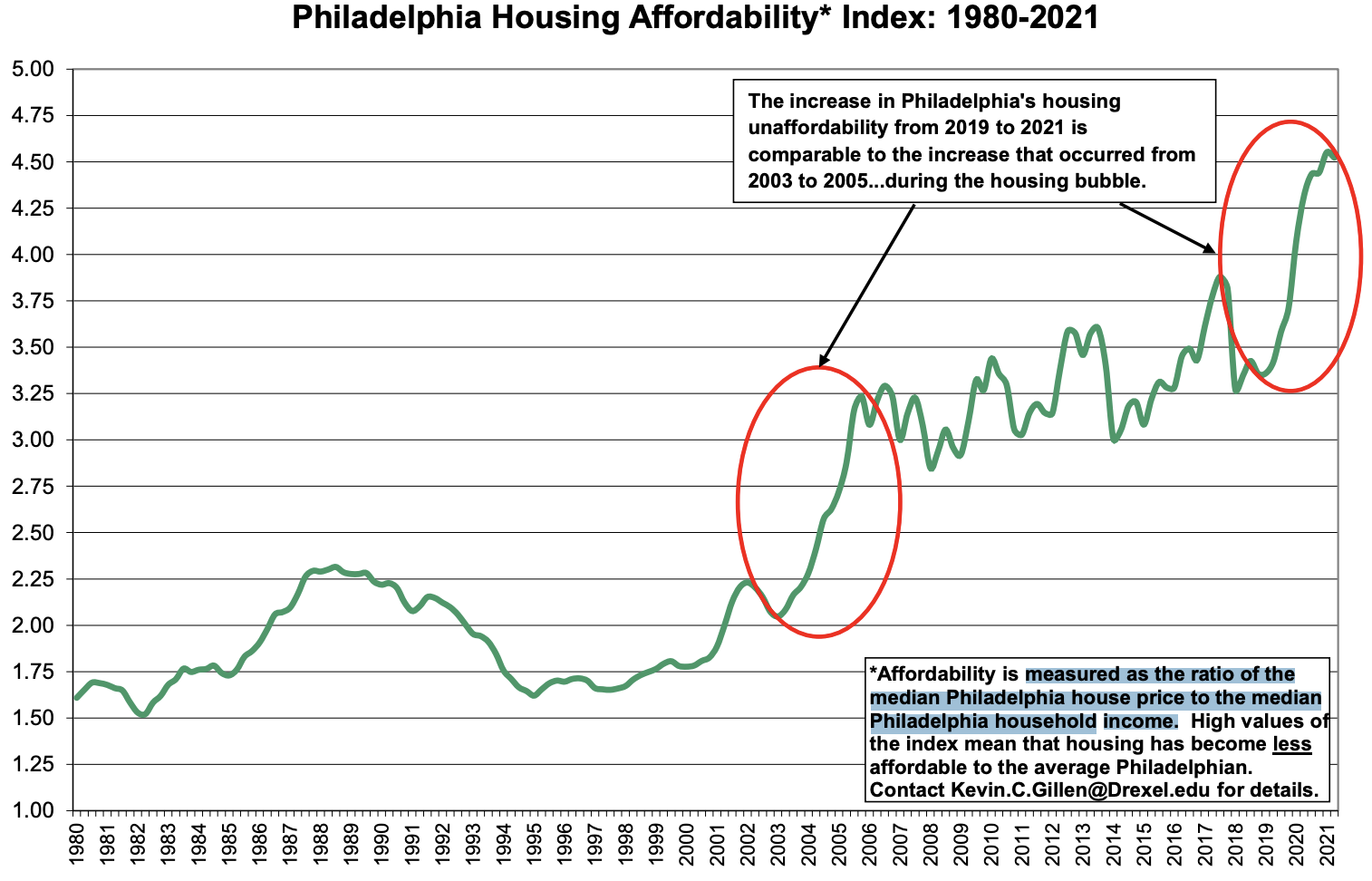 Post-pandemic, Goldstein said, he anticipates an increased demand for housing — especially properties with green space, since living in tight spaces in cities has been a challenge for many during COVID-19.

“What did we learn in the pandemic? We learned that if you were stuck in a 400 or 600 square foot apartment, your life was pretty miserable,” he said. “I think neighborhoods like parts of the West Philadelphia footprint will see that increase in demand because particularly at the edges, the home prices aren’t crazy yet. You can get some extra rooms, you can get good connectivity to downtown.”

Emily Dowdall, the Policy Director for Policy Solutions at Reinvestment Fund, said that the University's land purchases and policies over time have affected the surrounding real estate market, increasing prices in the area.

Dowdall said that in the 1960s, Penn was part of a plan to clear low-income neighborhoods from the area — part of a larger pattern that was occurring across the country. This included the Black Bottom neighborhood, which was purchased and demolished by Penn, resulting in mass displacement and anger from the residents toward the University.

Another factor in the rise of real estate prices was the downpayment assistance program that Penn introduced in the 1990s, Dowdall said. The program was created in an effort to revitalize commercial activity near the University, she said, following a high rate of migration out of the area and high-profile incidents of violence.

Change in income of 19104 vs. surrounding zip codes

The analysis compares changes in the average income of residents in 19104 with those with zip codes in Center City, including 19102, 19103, 19106, and 19107. Clear upward trends in income are observed in 19104, compared with an unclear trend in the Center City zip codes. This indicates both higher-income residents moving in, and incomes increasing for current residents.

In the past, the University has taken some action to combat this phenomenon, which some have called “Penntrification.” In the 1990s, Dowdall said, the University took complaints from the West Philadelphia community under heavy consideration and expanded their footprint eastward, rather than westward, taking some of the pressure off the housing market in West Philadelphia.

She said she believes that the University’s best course of action would be to do more to support the surrounding community, specifically through the use of PILOTs. PILOTs, or payments in lieu of taxes, are payments made by large institutions that are exempt from property taxes in support of local institutions. After receiving criticism for refusing to pay PILOTs, Penn pledged to pay $100 million to local schools in Nov. 2020.

Similar to Dowdall, Goldstein said he felt Penn has a duty to do more to support the community as it expands.

“I always feel like universities have an obligation to serve the neighborhoods within which they set and you know, you have some world-class researchers for example, at the University and people in Social and Human Service professions who could be of tremendous assistance to the neighbors that live there," Goldstein said. "Doing those kinds of things using the assets of the University, for those public goods, I think makes all the sense in the world.”