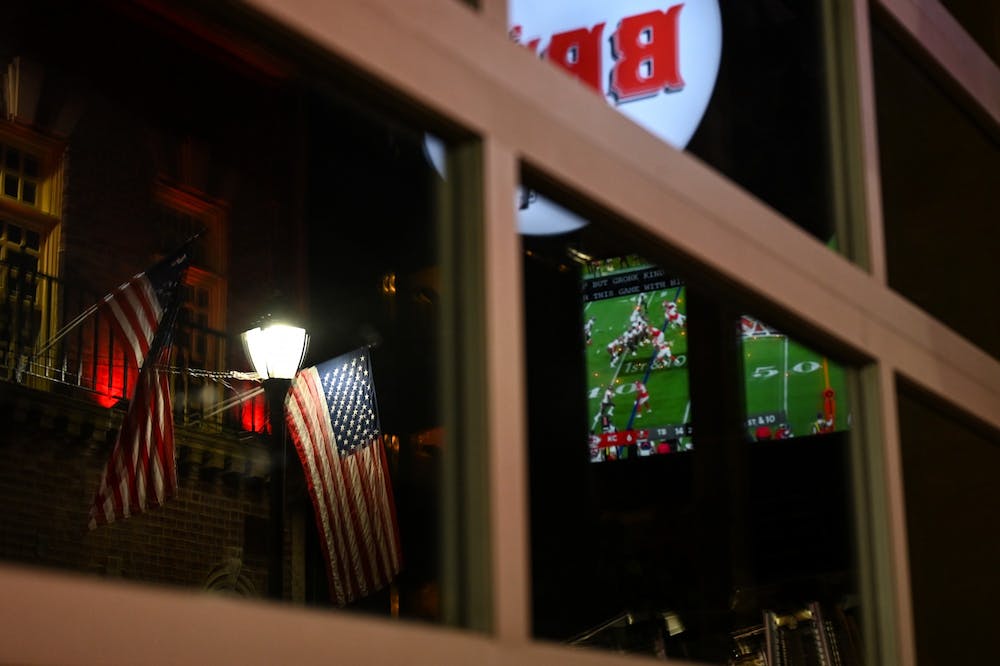 American flags were reflected in the window of Brü Craft & Wurst, an alehouse in Center City that welcomed diners indoors to watch the game.

Three years ago, the streets of Philadelphia were overflowing with excitement. Fireworks were set off, cars were overturned, and traffic poles were taken over by raucous fans. The Philadelphia Eagles had won their first-ever Super Bowl.

This year, those same streets were eerily empty, and many restaurants and sports bars were closed due to the ongoing COVID-19 crisis. Much of American life has been altered by the pandemic, but the traditions of the Super Bowl remained as strong as would safely allow. Here's how the Penn and Philadelphia communities watched the game.

The morning of Feb. 7, preparations for at-home Super Bowl parties and gatherings were already underway with last-minute grocery store trips. At the Acme Markets location on 40th and Walnut streets, chips and other snacks were beginning to run low.

Bars and restaurants put extra precautions in place this year, such as social distancing and limited dine-in options, because of the City of Philadelphia's 25% indoor dining capacity rule. McGillin's Olde Ale House had cleaning supplies on the hostess podium.

Many people decided to stay at home with small groups to have Super Bowl watch parties.

Although some aspects of the tradition were canceled this year, many remained. Fans and viewers from around the country placed prop bets on outcomes within the game, such as the coin toss result. The coin landed on heads, and the Kansas City Chiefs won the toss.

Outdoor diners at Tradesman's in Center City were kept warm by heat lamps in the 30°F weather.

Typical Super Bowl appetizers, like nachos, were made for families and friends to enjoy the game at home.

Two masked servers at Tradesman's brought out a 5-foot-long cheesesteak to a table of Drexel University students.

Some escaped the cold weather to watch the game inside Allegro Pizza and Grill.

Plastic curtains separated diners who were seated outside, reflecting the many TV screens playing the game.

Although some restaurants and bars offered outdoor viewing experiences and limited indoor dining, others remained completely shuttered on what would have been one of their busiest nights of the year.