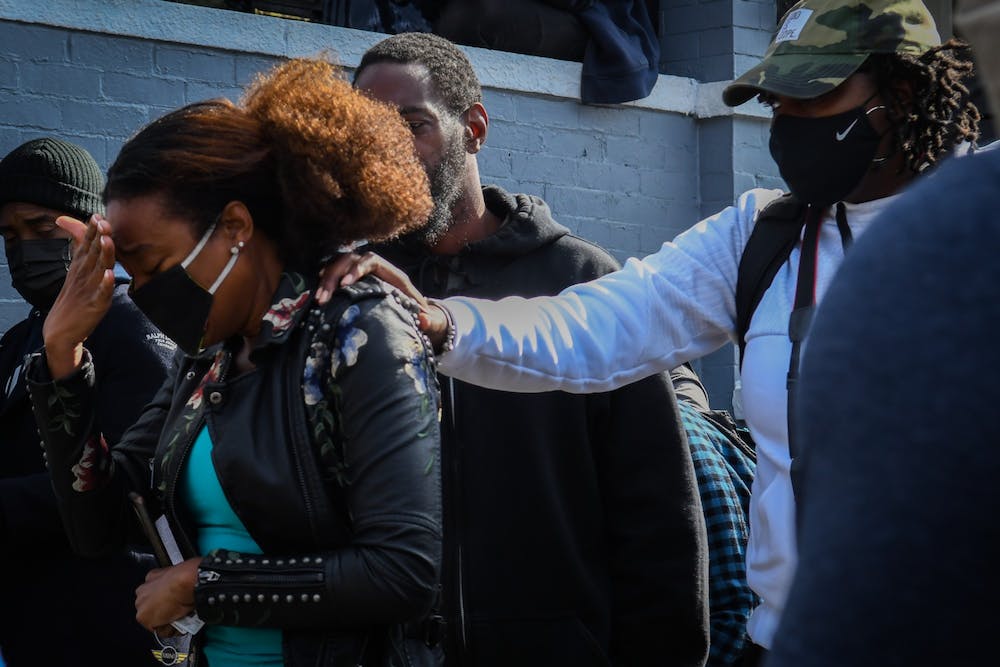 More than 500 demonstrators packed the narrow residential streets of West Philadelphia on Halloween afternoon, nearly a week after the fatal police shooting of Walter Wallace Jr., to demand justice for him as well as the rest of the Black community. After three nights of calm following two nights of unrest, the gathering remained peaceful, prompting cheers and chants from neighbors in costumes, as well as the protesters in attendance. Here's how Saturday's protest unfolded.

Christopher Bowman, a teacher in West Philadelphia and representative of the movement "I Will Breathe," began the protest by addressing the group on 60th and Locust streets near the place where Walter Wallace Jr. was shot by a police officer last Monday.

The crowd grew in size as neighbors in the West Philadelphia area cheered and joined the demonstrators, demanding for police reform.

Protesters continued to chant "No justice, no peace!" and "[F**k] 12" as they marched forward.

Police formed a barricade on 56th and Pine streets, preventing the demonstrators from going near the 18th police precinct nearby.

Several protesters exchanged words with the police, criticizing their lack of empathy and failure to hold their fellow colleagues accountable for police brutality.

Activist YahNé Ndgo emphasized the importance of cultivating a movement to speak out against trauma that many in the Black community have dealt with.

While many protesters chanted, a few members of the Party of Socialism & Liberation beat drums.

A family dressed up as The Incredibles cheered and raised their fists in solidarity with the demonstration.

The crowd reached Malcolm X Park on 51st and Pine streets, where speakers from numerous Philadelphia organizations addressed the crowd. Speakers included Mike Africa Jr., who fought for his parents’ release after they had been unjustly sentenced to 40 years in prison.

The Jones family, who has been active in past Philadelphia protests, donned a "Black Lives Matter" flag as it stood in solidarity with the crowd.

The protest ended on a joyous note, as food, snacks, and other items were passed out to the protesters while they departed from the park.

A sketch in remembrance of Walter Wallace Jr. sat among the crowd, who chanted his name in his honor.