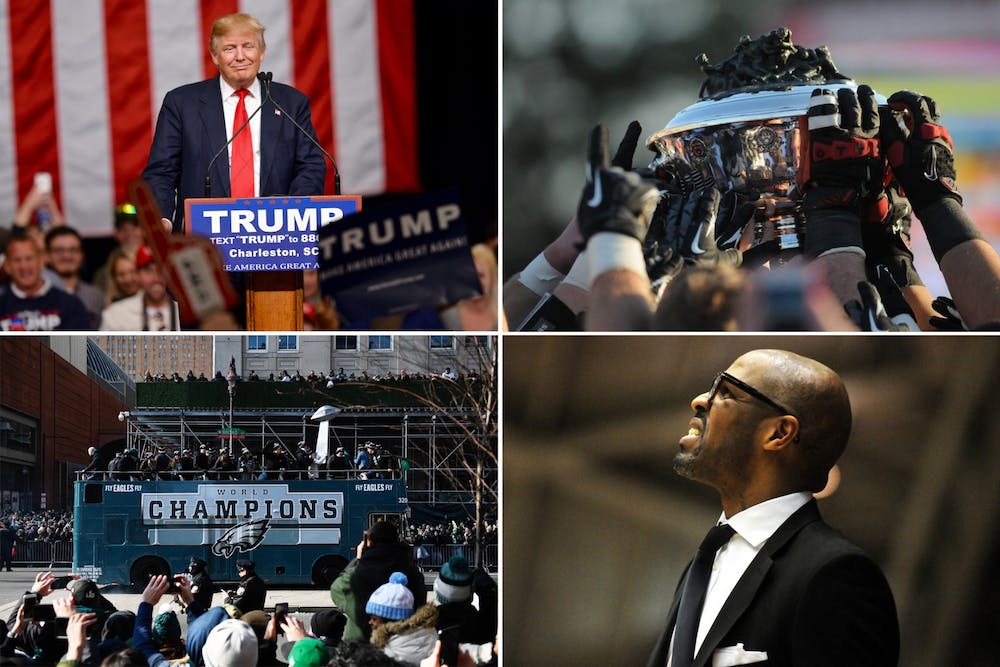 The 2010s are coming to a close, and a lot has happened at Penn in the last decade. It was a decade of firsts: the first Penn alumnus to be to elected President of the United States, the first Philadelphia Eagles Super Bowl victory, and the first Women's March. There were several record-breaking and newsworthy athletic achievements. Important figures such as Pope Francis and LeBron James visited the University. And Penn's campus continued to expand with new construction projects.

Take a look back at the past decade at Penn in photos.

2010: Jerome Allen is named head coach of the Penn men's basketball team at a press conference at the Palestra. In October 2018, Allen pleaded guilty to accepting bribes in exchange for the recruitment of a player.

2010: Snowpocalypse hit campus, shutting down Penn due to snow for the first time since February 2003.

2012: The 2012 Ivy League champion Penn football team hoists the championship trophy for the third time in four seasons following its 35-28 victory over Cornell.

2013: Fifth-year senior quarterback Billy Ragone does his part in the longest football game in Ivy League history, breaking for a 27-yard touchdown run in the second overtime to tie the game at 28 apiece.

2014: Students take to the Philadelphia streets to protest in the wake of the grand jury decision not to indict police officer Darren Wilson in the shooting death of teenager Michael Brown in Ferguson, Mo.

2015: Pope Francis visits Philadelphia as part of the 2015 World Meeting of Families celebration.

2016: New College House opens its doors for the first time to 350 freshman residents.

2016: Donald Trump, the Republican nominee and 1968 Wharton graduate, is elected the 45th President of the United States.

2017: One day after President Trump's inauguration, thousands of citizens gather in Philadelphia and Washington D.C. for the first annual Women's March.

2018: The Philadelphia Eagles earned their first-ever Super Bowl title on Feb. 4, defeating the New England Patriots 41-33 in Minnesota. A victory parade draws millions to Broad Street the following week, and classes at Penn are cancelled for the day.

2019: Several schools and buildings at Penn were renamed due to large donations, including the University of Pennsylvania Carey Law School, the Stuart Weitzman School of Design, and Lauder College House.