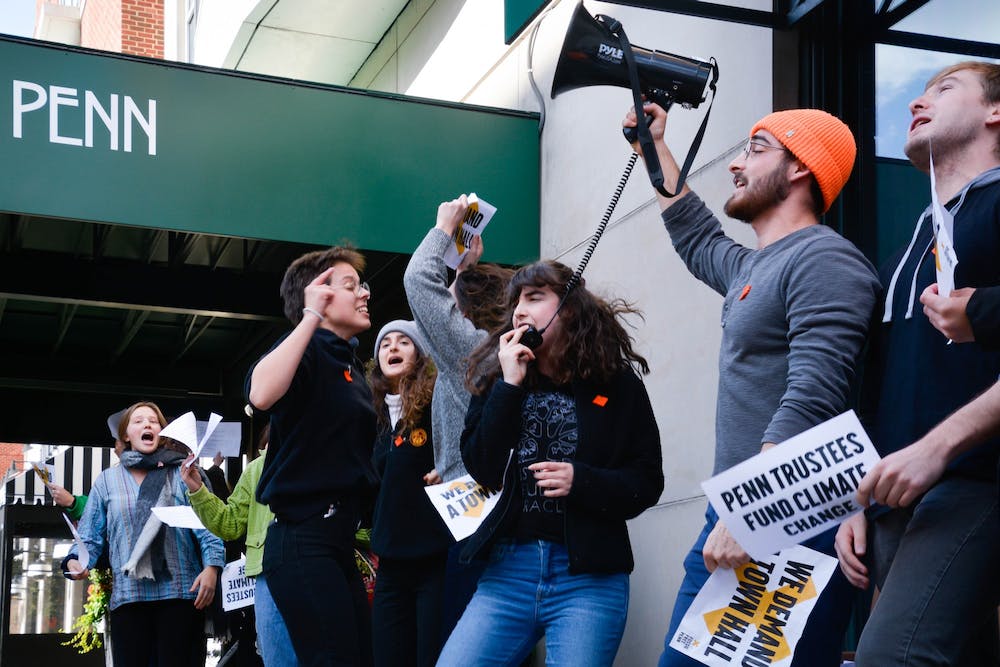 A protest by Fossil Free Penn members shut down the Board of Trustees meeting held in the Inn at Penn on Friday. Singing and chanting, the protesters demanded Penn President Amy Gutmann, Board of Trustees Chair David Cohen, and Penn Chief Investment Officer Peter Ammon hold a town hall on the divestment from fossil fuels.

While the protest during the meeting lasted for about half an hour, members began organizing an hour prior to the meeting. They continued chanting outside the Inn for about 20 minutes after the meeting was shut down.

FFP leaders gave brief speeches through megaphone to fellow members before the protest in front of the Button.

The protesters filed into the Inn at Penn, where the Board of Trustees meeting was being held. Each member wore an orange, square felt pin. Orange is the international color for fossil fuel divestment.

At first, the protesters stood silently in the back corner of the room holding their signs.

The Board of Trustees did not acknowledge the protesters.

The protesters began singing "Which side are you on?" five minutes into the meeting. Open Expression Observers standing between the protestors and the trustees told the students to quiet down.

The singing and chanting protesters drowned out the speakers at the meeting.

Open Expression Observers, police, and security stood in front of the protesters.

Some Board of Trustees members covered their ears as the protest persisted.

The protest moved outside the Inn once the board meeting was adjourned due to the disruption.

The protesters continued their chants. After a few minutes, police officers arrived and told the students not to block the sidewalk.

A sign demanding divestment prompted drivers-by to honk their horns in support.

FFP Coordinator and College sophomore Emma Glasser spoke at the conclusion of the protest, thanking all of the protesters for their work and encouraging them to continue the fight for divestment.