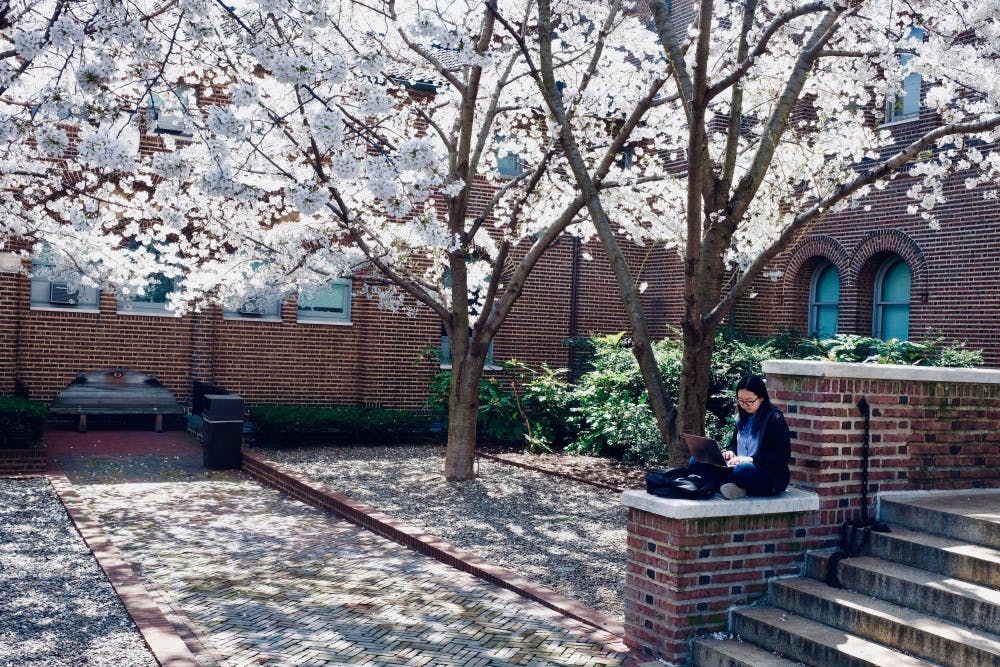 With finals season and warmer weather now here, The Daily Pennsylvanian has scoped out some of the best outdoor study spots on campus. Some are old favorites, others less known. Some are secluded, and some are known as "see-and-be-seen" spots. Regardless, there is a place on campus for everyone to study, eat food, or just catch up with friends.

Located outside the Penn Museum, Warden Garden sits near 32nd and South streets. The garden includes glass mosaics, sculptures, and marble medallions that frame the Museum’s main entrance. Numerous tables and chairs are available for studying and outdoor events, and the space can even be rented for weddings. After studying, students can visit the galleries in the museum for free, (with a PennCard) including the new Egyptian gallery. Recently, the Penn Museum announced it will move its 12.5-ton Egyptian Sphinx, the largest in the Western hemisphere, from the Museum’s Egyptian Gallery to its main hall, the first time since 1926.

Koo Plaza, situated on the second floor of Huntsman Hall, is bordered with large triangular lights made from glass. The location offers students access to Wharton’s MBA Cafe, green space, benches, tables, and modern art. Huntsman Hall and Koo Plaza were designed by architecture firm Kohn Pedersen Fox in 2002. Koo Plaza was partially funded by a generous donation from Chen Fu Koo and his children Chester and Leslie Koo. The space can be reserved for group events on the weekends.

The BioPond in James G. Kaskey Memorial Park was originally intended to be a botanical research garden, an idea presented by J. T. Rothrock, a former Botany professor at Penn. He wanted to make better use of the land around the department’s buildings. The garden was built in the 1890s and is now a serene destination that people can use at their leisure. The spot can be found near 38th Street, adjacent to Hamilton Walk, behind the Richards Medical Research Laboratories. Its secluded benches provide the perfect place to do work undisturbed with a natural view.

Located at 34th and Walnut streets, Franklin’s Table, a food hall that opened in March 2018, sparked controversy when community members said it was part of a bigger trend of Penn gentrifying Philadelphia. Students were also displeased that the hall did not accept Dining Dollars. Inside, Franklin’s Table has tables and chairs, but directly towards the back, there is an entrance to outdoor seating where students can enjoy food from one of the many restaurants in the food hall while studying.

The Huntsman Pavilion is always a packed outdoor study spot on campus due to its proximity to Pret a Manger and Huntsman Hall. The tables are shaded and perfect for studying, eating, or chatting with friends.

America’s oldest student union building, Houston Hall, was designed by William C. Hays and Milton Medary in a student competition. Outside the newly renovated dining hall (which accepts Dining Dollars) and the Office of Student Life are large granite steps open at any time. Many students grab food from Houston Hall and enjoy the sunshine while doing work on the Perelman Quadrangle steps.

Quain Courtyard lies between four buildings on the School of Engineering and Applied Science Quad: Levine Hall, the Towne Building, Skirkanich Hall, and the Moore School Building. The courtyard was a gift from former 1973 Engineering graduate Mitch Quain during the construction of Skirkanich Hall, and has three levels to choose from. There is a main level, a risen level above the Skirkanich auditorium, and a sunken level with a garden and fountain. The space is often used by Engineering students due to its proximity to engineering classes, but anyone can enjoy the peaceful environment of Quain Courtyard.

The tables and chairs outside Tortas Frontera at the Arch on 36th and Locust streets are a popular study spot for students during all hours. This study spot is popular due to its location on campus and ability for students to “see-and-be-seen.” Tortas Frontera, however, is set to close by the end of this semester and will be replaced with a new dining option on campus, which Penn has yet to announce. Some students believe it should be replaced with a 24-hour diner.

Located on 3914 Locust Walk, Civic House is home to a student community dedicated to community service and social advocacy between Penn and West Philadelphia. The few tables and chairs outside the house are open to those who attend the many events hosted by Civic House, and the general public as well.

After enjoying a show at the Annenberg Center, whether from on-campus groups like Penn Glee Club or famous visitors such as Trevor Noah, this study spot is open 24/7.

Many students study in Penn’s largest library, Van Pelt-Dietrich Library. Currently, the library is undergoing a few changes. Bag checks are set to be eliminated for students exiting the library and the entire basement will be renovated over the summer. Outside the library, there's an amphitheater adjacent to the metal peace sign sculpture. The sculpture was created by eight students at Penn in 1967. Above the sculpture are additional tables and chairs students can use as well.

College Green, located in the heart of campus, has a large amount of green space, brick pathways, and the iconic Love Statue. Historically, the Love Statue has been a hub for student activism on campus. This semester, students shed light on the challenges Asian American women face by posting flyers on the statue. On College Green, students can also study on the grass, play frisbee, or bring a hammock to attach to the nearby trees. The space is also perfect for all types of ceremonies, parties, concerts, promotional, and recruitment events.

The Lerner Center, also known as the Music Building, was originally built in 1892, though its historic facade and interior have recently been renovated. The outside seating area, facing the Engineering Quad, has a water installation that is turned on when the weather permits.

The desks in front of Meyerson Hall, soon to be named after Stuart Weitzman, are an architectural novelty. Featuring no chairs, the desks “float” above the concrete ledge in front of the building, offering unique seating options. The building and its front desks are located at 210 S. 34th St., next to Fisher Fine Arts Library.

Benches are everywhere on Penn's campus. They are located along Locust Walk, in front of buildings, and even in hidden corners. They are perfect for studying, eating food, listening to music, or catching up with a friend.

Another popular “see-and-be-seen” location, the area near the Compass right below Huntsman Hall on 37th Street is spacious with many tables to study on. And on the nicest days, it is possible to spot a dog playing frisbee on Locust.

Perry World House is known for hosting renowned speakers such as President Tsakhiagiin Elbegdorj of Mongolia, former Federal Reserve Chair Alan Greenspan, and former President of Mexico Felipe Calderón. When not attending such events, students can sit either on the tables or long bench outside. The location is perfectly situated above food trucks on 38th Street as well.

Recently students have been angry at the elimination of more green space on campus due to the construction of new dormitory, New College House West, which will finish in 2021. The construction is taking place on High Rise Field, a green space in between the different high-rise college houses: Harrison, Harnwell, and Rodin. The space is also used for campus traditions such a Hey Day — a ceremony inducting juniors into the senior class.

On the opposite side of campus there is another large green space next to New College House. This space has a large hill students often use for sledding in the winter, and large steps right next to it.

This study spot feature large tables and benches adjacent to Starbucks under the 1920 Commons Dining Hall. This location is perfect for residents of the high rises who want to study nearby home, or for any Starbucks fanatic going in to get a drink anyway.