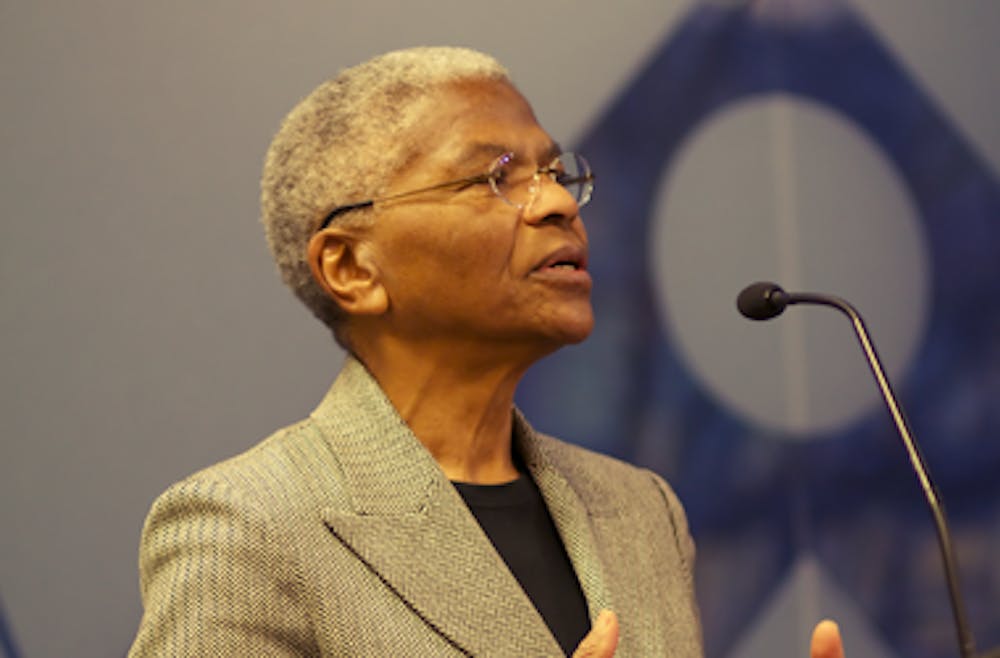 “We can all agree, Democrats and Republicans, that Barack Obama can deliver one heck of a speech,” said Penn History professor Mary Frances Berry, speaking at the Penn Bookstore Thursday about her latest book.

The book, titled Power in Words: The Stories Behind Barack Obama’s Speeches, from the State House to the White House, takes a behind-the-scenes look on the development of Obama’s speechwriting process. She co-wrote the book with Josh Gottheimer, a former student of hers who has worked as a speechwriter for both former President Bill Clinton and Sen. John Kerry (D-Mass.).

Over 30 Penn and West Philadelphia community members trickled into the Bookstore to hear Berry offer her inside look.

Since running for Illinois state senator, Obama delivered speeches that have consistently focused on “hope, change and responsibility,” Berry said. Though initially criticized for being “too Harvard and not enough South Side,” Obama quickly began mimicking the style of speeches given in black churches.

It was his 2004 Democratic Convention speech, however, which “propelled him onto the world stage,” Berry said. Following his win in the 2008 Iowa caucuses, Berry said she “knew Obama was going to win the nomination,” and that there was no comparison between the quality of his speeches and those of Hillary CIinton. She also discussed the importance of the “A More Perfect Union” speech concerning race in the United States which he delivered at the National Constitution Center in Philadelphia.

Commenting on the change in Obama’s speeches since winning the presidency, Berry explained that presidential speeches aim to be informative rather than emotionally moving. “Most speeches presidents give are boring … they’re telling you about the blah-blah,” Berry said.

However, with the next election approach, Berry predicted that Obama would “get his groove back” and utilize his skills in rallying crowds. “He’s going to be in campaign mode from now on, talking to people in his short-sleeves,” she said.

The book talk was organized in conjunction with the Center for Africana Studies and is part of the Bookstore’s Black History Month program series.

The audience was overall pleased with the talk. “She’s one of the best professors on campus,” said first-year School of Arts and Sciences graduate student Anthony Pratcher, “I go whenever I can see her speak.”

Penn Alumni Relations director Elise Betz echoed this sentiment, commenting “Dr. Berry is a legend,” and that “it was fabulous — I’ll definitely read the book.”

This article was updated to reflect the fact that John Kerry represents Massachusetts, not Maryland.