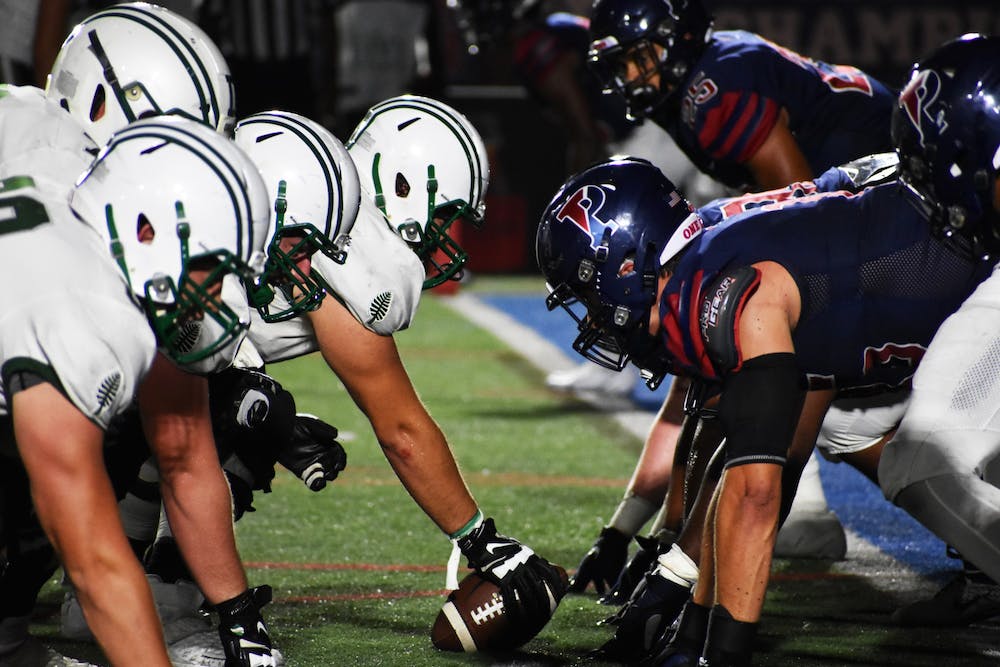 Penn and Dartmouth face off feet from the Quakers' end zone during the first Penn home game on Oct. 1.

In the days leading up to Penn football's home opener on Oct. 1, campus had been buzzing with excitement. The student section had sold out of mobile tickets three days before the game; for first years and sophomores, this was their first chance to see the Quakers play at Franklin Field. It was the first Penn home football game since 2019 after the 2020 season was suspended due to COVID-19.

The Quakers faced off against Dartmouth, who won this matchup two years ago in dominant fashion and is one of the favorites to capture this season's Ivy League title. The Big Green repeated that dominance this time around, coming out on top by a score of 31-7. Despite the heavy defeat, the Quakers remain encouraged by the fan support, which has been decreasing in recent years. Here's what the game looked like.

The student section was completely full at the start of the game. Fans cheered loudly for the band while waiting for the team's entrance.

Members of the Class of 2025 raised their phones to record as the Quaker mascot and cheerleaders led the football team onto Franklin Field. The students stood at the southeast entrance with the Penn Band, piling up all the way to the middle of the field.

Sophomore kicker Graham Gotlieb kicked off the game for the Quakers.

After an initial touchdown by Dartmouth, senior wide receiver Ryan Cragun made an impressive 70-yard catch-and-run that led to Penn's opening score.

Graduate student running back Isaiah Malcome was lifted up by a teammate in celebration of his touchdown that tied the game at seven in the first quarter.

Before the game and during halftime, the Penn color guard performed alongside the Penn Band. The group was reintroduced this June after over 10 years on the sidelines.

Cheerleaders held up the Quaker mascot to entertain the crowd during halftime. After the first half, a significant portion of the student section emptied out.

The Penn defensive line jostled with Dartmouth players during the third quarter of the game. The line struggled to protect quarterback John Quinnelly, giving up two sacks.

At the end of the third quarter, fans threw toast onto the track as part of a Penn tradition that first began in the 1970s.

The game became out of reach for the Quakers as Dartmouth quarterback Nick Howard scored a one-yard rushing touchdown early in the fourth quarter, despite an attempt from senior defensive back Mohammed Diakite to stop him.

The Quakers and Big Green shook hands as  "The Red and the Blue" played after Dartmouth secured the 31-7 victory. The Quakers' next game is Oct. 9 against Lehigh at Franklin Field.