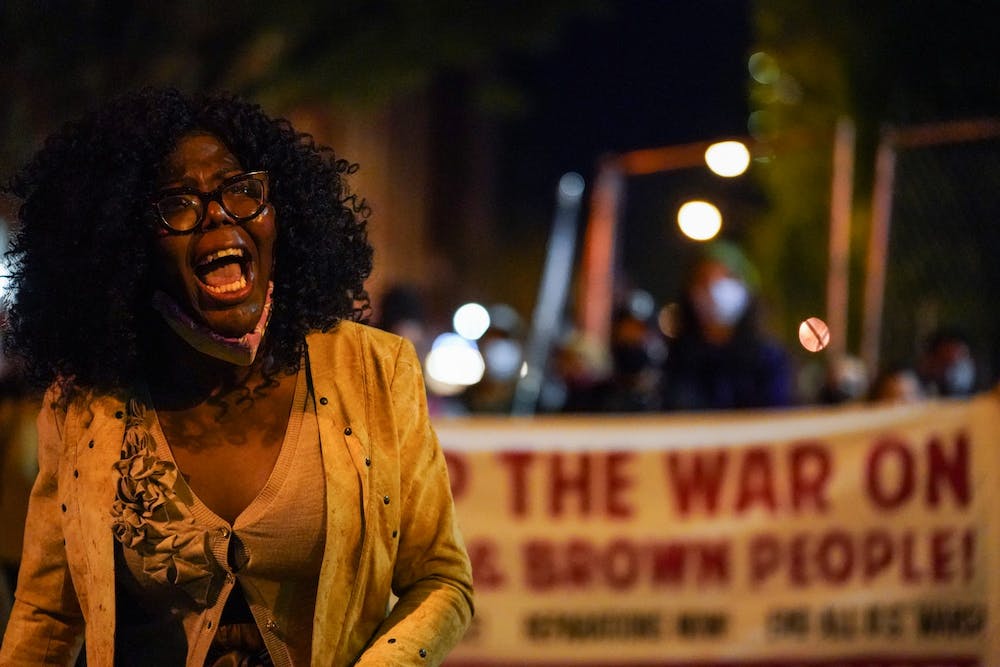 Demonstrators marched through Philadelphia Tuesday night as part of the Justice for Daunte Wright protest. Wright, a 20-year-old Black man, was shot and killed by white police officer Kim Potter during a traffic stop in Brooklyn Center, Minn. on Sunday. The protesters called for justice for Black and transgender lives, as well as the abolition of the police. Earlier in the day, Potter resigned as a Brooklyn Center police officer. On April 14, Potter was arrested and charged with second-degree manslaughter.

Here's how Philadelphia showed solidarity with protesters across the country demanding justice for Wright.

The Philadelphia Police Department had a strong presence at the protest from the start, greatly outnumbering the demonstrators. While about 50 people gathered at City Hall at the beginning of the march, the peak of the protest brought out about 200 marchers.

Daunte Wright was pulled over by Brooklyn Center police for having expired license plates. Potter allegedly meant to pull a taser, but instead pulled and fired her gun.

The protest turned east off of the Benjamin Franklin Parkway and continued throughout Center City as the sun set.

Marchers often chanted, "No justice, no peace! Abolish the police!"

One banner carried by protesters read, "Stop the War on Black & Brown People!"

An outdoor diner watched as the protest passed.

Protesters often confronted the police as they walked past them.

Some protesters showed their signs and others banged on the plexiglass windows as they marched by outdoor dining structures.

Police car lights illuminated the night as the march continued into South Philadelphia.

Kendall Stephens and Marcha Pisces, a Philadelphia drag performer and LGBTQ rights activist, held hands as they led the protest. The march came to a close at City Hall at 10:30 p.m.