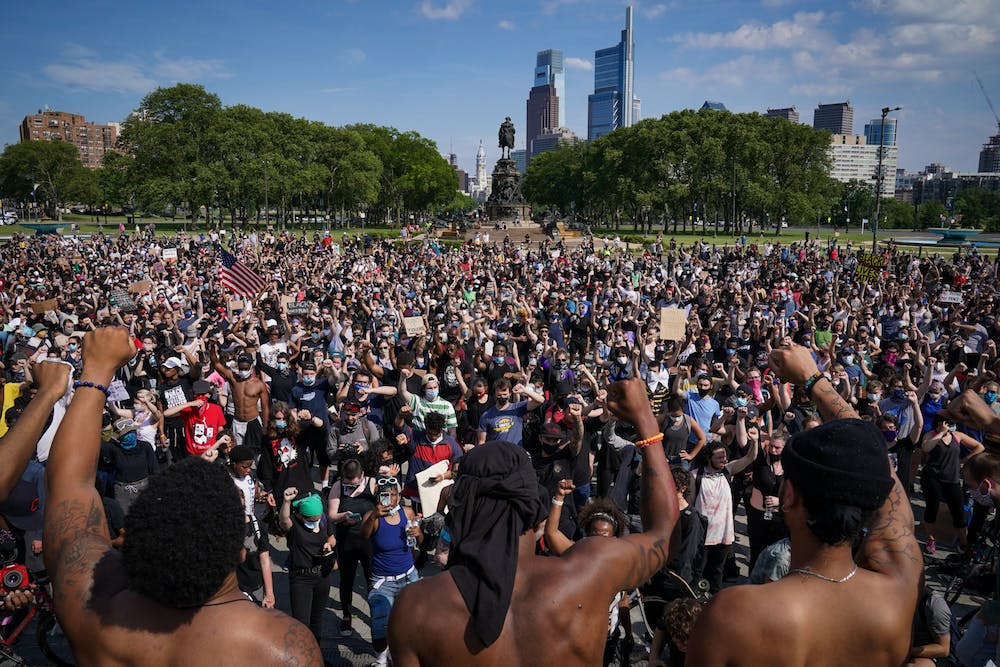 Protesters raised their fists in solidarity in front of the Philadelphia Museum of Art on June 3.

In response to the recent death of George Floyd, who died after a Minneapolis police officer pressed his knee on Floyd's neck for nearly nine minutes, protests have erupted in many cities across the United States. Thousands of demonstrators in Philadelphia have marched for nine consecutive days now, demanding racial justice and systematic change.

Chanting crowds, empowering speeches, and peaceful persistence: this is what the Philadelphia protests have looked like.

The Philadelphia demonstrations began on May 30 at City Hall, where peaceful protestors held up signs and knelt — while socially distanced — in honor of Floyd.

Hours after the protestors began marching through the city streets, acts of violence and destruction quickly ensued as a police vehicle was set on fire on Broad and Vine Streets.

Some protestors used a barricade in attempt to take down the 10-foot-tall statue of Frank Rizzo, a controversial former Philadelphia police commissioner and mayor.

Multiple cars went up in flames on the north side of City Hall.

Police officers used batons, tear gas, and pepper spray to contain and push back the protesters.

The West Philadelphia community came together for the Bring-A-Broom event on June 1 to help clean 52nd Street businesses that had been looted and vandalized the previous afternoon.

On June 1, the third day of protests, hundreds of people marched along the I-676 highway while  halting oncoming traffic.

Dozens of police officers and SWAT teams arrived on the scene, shooting tear gas from armored vehicles to force demonstrators off of the highway.

Protestors hurriedly attempted to run from the tear gas. Some were unable to retreat, however, and were arrested by the police.

The day concluded peacefully as protesters put their hands behind their heads in front of a line of police officers.

Demonstrations marched to Penn's campus on June 2, where protesters sat in silence for nine minutes on Walnut Street by Huntsman Hall and in front of Penn President Amy Gutmann's house.

Residents banged pots and pans from their windows as protestors marched below along Walnut Street.

The fifth day of protests went into the night and concluded in Aviator Park.

Pennsylvania Governor Tom Wolf called upon the United States National Guard to assist in patrolling the streets. Many stood guard around the Rizzo statue, which was removed on June 3.

Kneeling and American flags were two of the main symbols seen throughout the protests. Protesters often knelt upon streets for nearly nine minutes at once — the amount of time officer Derek Chauvin knelt on Floyd’s neck.

In addition to kneeling, demonstrators laid in silence on North Broad Street on June 3.

After walking in 90° weather, demonstrators rested in the shadow cast by the Philadelphia Museum of Art.

Peaceful protests continued as the end of the week neared. The march on June 4 paused at LOVE Park, where group leaders spoke to the crowd.

The leaders brought the protests to Independence Hall as a reminder that the United States was founded on the principle of freedom.

On June 5, hundreds of healthcare workers knelt on Franklin Field to honor George Floyd and protest against racial inequality in the U.S. healthcare system.

The June 6 protest brought out the largest crowd yet, with more than 10,000 people attending, and creating a march that wound throughout the city's streets for over 1.5 miles.

After eight days of protesting throughout the city, a large dance circle broke out in front of the Philadelphia Museum of Art, in celebration of Philadelphia's hip-hop culture.