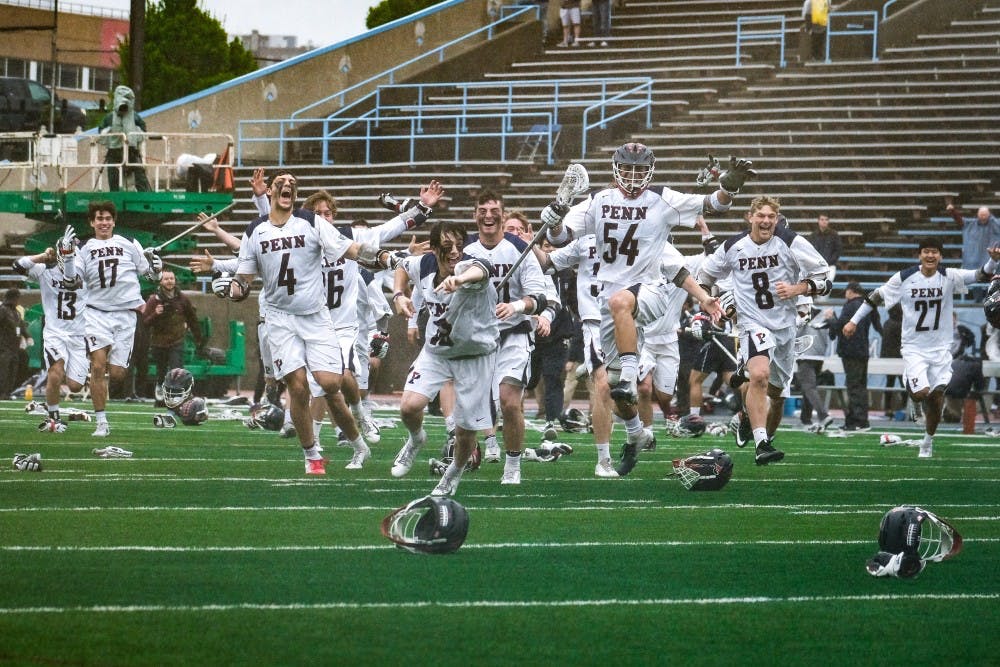 The 2019 season may have ended up being a success for Penn men's lacrosse, but it sure didn't start out that way. The Quakers fell to Maryland 13-12 in overtime in the season opener, followed by a 17-7 loss to Duke and 15-14 loss to Penn State. 2016 was the last time the Red and Blue had a winning record, and the team hadn't been to the NCAA tournament in five years. The future of the season seemed bleak after three games, and the expectations for Penn men's lacrosse had diminished.

After the Penn State defeat, there was a drastic shift in the team's performance. Freshman attackman Sam Handley and junior attackman Adam Goldner came to life. Victories over Villanova and St. Joe's were sparked by a high-powered offense. In the latter game, senior goalie Reed Junkin made an impressive 14 saves. A victory in the Ivy League season opener against Princeton brought the Quakers to an even 3-3 record.

Ivy play continued with two consecutive away games. First, a battle against Cornell, which the Quakers won narrowly, 16-15. Next, a matchup against the defending national champions: Yale. The two bouts between these teams in 2018 saw Yale defeat the the Red and Blue on both occasions, once in the regular season and once in the Ivy League tournament. The Elis were holding on to a slender 12-11 lead in the final seconds of the game when senior midfielder Tyler Dunn scored dramatically, sending the game into overtime. Junkin had a season-high 22 saves, keeping them in the game. In the third overtime period, it was Handley who scored, securing the stunning upset and saving Penn's perfect record in Ivy play.

Games against Brown and Harvard on the road resulted in two more wins for the Red and Blue, establishing an impressive 8-game winning streak. The victory over Harvard meant that Penn had captured at least a share of the Ivy League title for the first time in 31 years. The final game in Ivy play was looming, where the Quakers would take on Dartmouth with a chance to clinch the outright Ivy title.

A convincing 22-6 victory over the Big Green meant that Penn was the outright Ivy League regular season champion, clinching the number one seed in the Ivy tournament. The team that started with an 0-3 record had managed an impressive feat, one that hadn't been accomplished since 1988. The previous five head coaches were unable to accomplish what coach Mike Murphy had. Murphy and his team had just made history.

After being crowned regular season champions, the team finished off the regular season against the University of Vermont. The Quakers fought their way to a 12-10 victory, extending their winning streak to nine games. Against the Catamounts, Goldner set the new franchise record for goals in a season with 46.

Then came the Ivy League tournament. Penn defeated fourth-seeded Brown 13-12 in the semifinals, remaining perfect against Ivy League opponents. Yale's semifinal matchup Cornell saw Yale prevail over the Big Red, 15-10. For the second time this season, the Quakers would meet the Elis on their quest for a championship.

Penn versus Yale was the perfect game to decide the Ivy tournament title. Penn, having defeated Yale and in the midst of an unprecedented 10-game win streak, was favored. But Yale was the reigning national champions and have had the Quakers number for the past several seasons. Since the inception of the Ivy League tournament in 2009, the Red and Blue had never won both the regular season and Ivy Tournament titles in the same season. That would soon change.

Consistency and hard work paid off. Penn men's lacrosse went from an 0-3 record to becoming Ivy League regular season and tournament champions. The Quakers' 12-11 victory over Yale went down to the wire, and it was as dramatic as any game the Red and Blue played all year.

This guaranteed Penn a spot in the NCAA tournament, and they earned themselves a No. 4 seed. The Red and Blue felt unstoppable. This was the 13th time that the Red and Blue were in the NCAA tournament. The first round went as expected; the higher seeded Quakers defeated Army, 13-8. Senior captain Simon Mathias led by example, scoring four goals while paired against an All-American defenseman in Johnny Surdick.

When the NCAA tournament bracket was revealed, there was one potential matchup that immediately jumped out: Penn versus Yale in the second round. Both teams only needed to win one game to meet for third time in 2019. The Quakers and the Elis both did their jobs in the first round, and the matchup was set. Penn against Yale, with a trip to the final four on the line.

The contest was back and forth throughout, with countless twists and turns. Regulation ended with the teams tied at 18. Yale and Penn were headed for overtime. In both previous games, Penn had won by a single goal. The third game would also decided by a one-goal margin. But this time, Yale came out on top. A golden goal from Yale midfielder Jack Tigh sent the Bulldogs to the final four and the Red and Blue home. It was a form of poetic retribution. The Quakers' season, and their record 12-game winning streak, had come to an end.

This season was a tremendous success. It was the team's first 6-0 Ivy record since 1984, as well as its first NCAA quarterfinal appearance since 1989. It was the first time ever Penn had won both the Ivy League regular season and tournament. Murphy's 10th season coaching the Quakers cemented him as one of the best coaches to ever lead Penn men's lacrosse, and this season will go down as one of the greatest in program history. While key players such as Mathias and Junkin may have graduated, there is certainly an exciting future for Murphy's team.