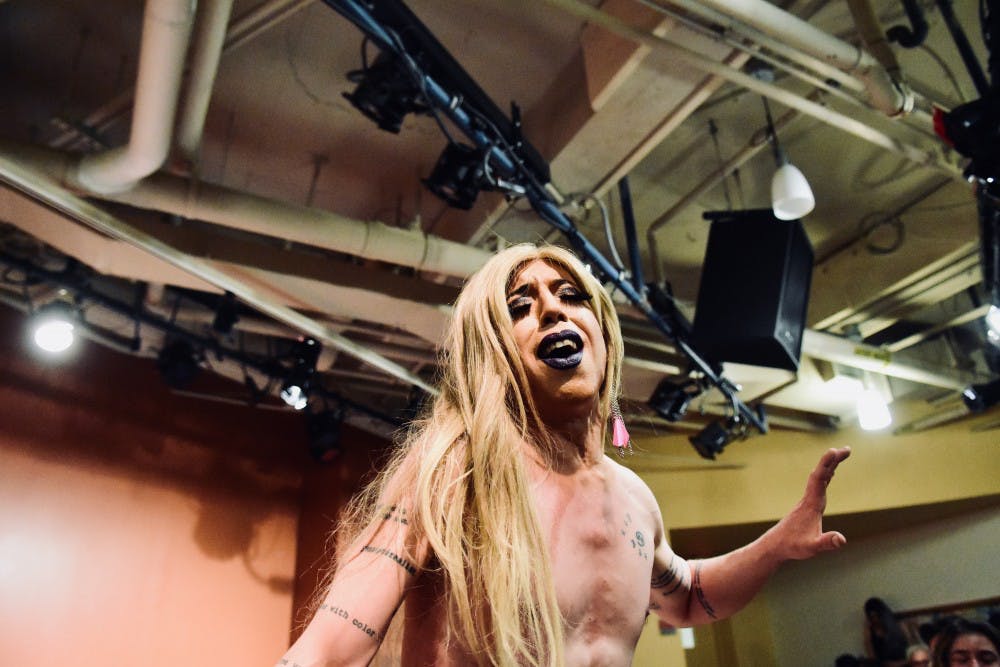 Pilar Salt is a Philadelphia-area drag queen. Salt has won “Big Mouth,” a popular annual lip sync competition in Philadelphia, and in recent years has returned to help judge the competition.

The event, held on March 30, was part of the 2019 QPenn week celebration. Each year, LGBTQ student groups across campus come together to host a variety of events, from a Pride Walk to panels on mental health. The Drag Show was the final event of this year’s festivities.

College sophomore and QSA Chair John Willis, who is majoring in art history, said his study of art fueled his motivation for organizing this year’s show.

“Drag is such an important form of artistic expression,” Willis said. “There was so much freedom in gender expression by our participants and it really shined through.”

Willis was one of the emcees for the show, and he wore his first-ever full drag to fit the role.

This year’s Drag Show was held at the Platt Student Performing Arts House and was free for all to attend. This was part of a larger effort by the QPenn organizing team to increase the accessibility of events.

Manny T. Lovett, a professional drag king from the Philadelphia area, performed a lip sync performance to “Slow Hands” by Niall Horan. As a drag king, Lovett tries to promote platforms for artists who do not fit drag stereotypes: Much of the mainstream media coverage of drag culture, like the popular reality television show “RuPaul’s Drag Race,” has a strong focus on drag queens rather than drag kings.

Jonathan D. Katz, a visiting professor in the Gender, Sexuality and Women’s Studies Department, spoke to attendees about the importance of enrolling in classes in Queer Studies.

“We are about to begin a very serious push for Queer Studies here at Penn," Katz said. "With that, the one thing you can do is enroll in our classes. The more of us in them, the more the University can understand that they need to build the curriculum in Queer Studies.”

Katz is one of the first-ever full-time American professors to be tenured in Queer Studies.

Drag queen Icon Ebony-Fierce returned to the stage later in the night to perform a second lip sync cover. The song cover was dubbed over with audio clips from the animated television show "Steven Universe," which featured the first same sex marriage proposal on a mainstream children's show.

This drag king’s performance opened with commentary on the Catholic Church’s teachings that queer behavior is sinful. The commentary was followed by a lip sync cover of “It’s a Sin” by the Pet Shop Boys.

Professional drag queen Pilar Salt performed an original stand-up piece. Audience members laughed as Salt told jokes while pretending to be a straight, white ally to the LGBTQ community. Salt also performed a lip sync towards the end of the show.

Manny T. Lovett returned to the stage for the show's finale, performing a lip sync to “Cake by the Ocean” by DNCE. Lovett threw glitter, confetti, and whipped cream towards the audience. In return, a few audience members threw dollar bills on to the stage.