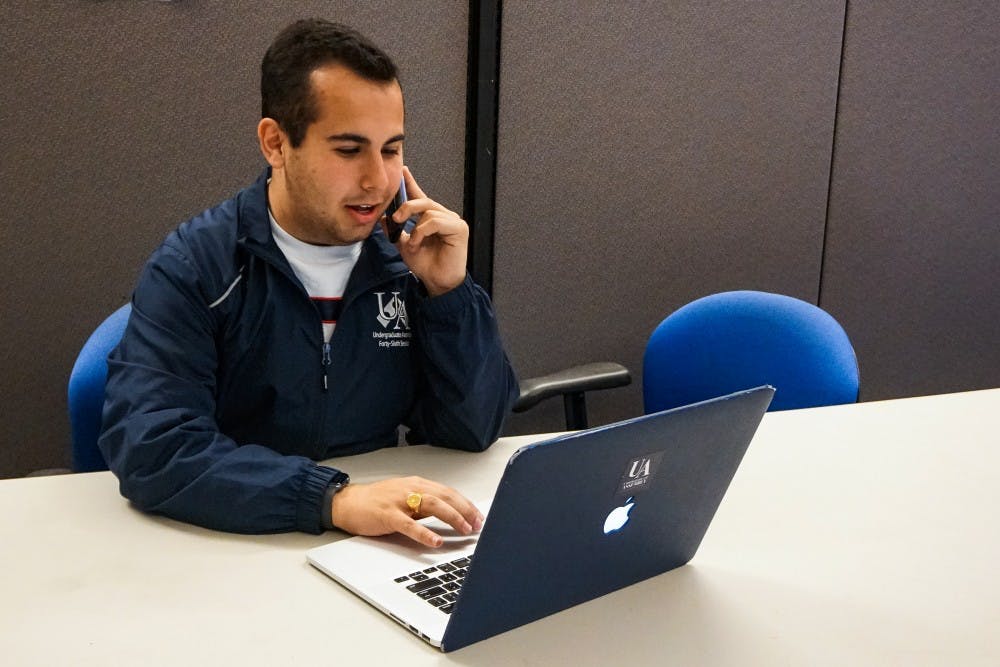 Hailing from Lafayette Hill, Pa., Michael Krone is currently a senior in the College majoring in political science and economics. Krone is heavily involved on campus; he is a part of the Student Activities Council, Shabbatones, Penn Mock Trial, Kite and Key, the PENNacle pre-orientation program, and two senior societies — Shamash and Sphinx. However, his biggest involvement has been with the Undergraduate Assembly, which he joined in his sophomore year as Communications Director. After that, he was the Speaker in his junior year and currently serves as the president of the UA.

On March 25, The Daily Pennsylvanian took a deep dive into Krone’s daily life and what keeps him busy, whether it’s giving a tour for Kite and Key, meeting with various leaders on campus to discuss pertinent issues, or simply checking up on emails and staying up to date with classes.

Like many students at Penn, Krone starts his day with a cup of coffee. His typical Starbucks order is a grande iced coffee with no milk. This semester, Krone has made it a point to try to accomplish something before his day starts, and this typically means stopping by the Starbucks under 1920 Commons to send out a few emails and preview lectures for classes.

A little before 10:30 a.m., Krone makes his way from Stommons to College Hall to run a Kite and Key tour for prospective Penn students.

“Kite and Key is a fun outlet to speak with prospective students. Most of my time at Penn is focused on what can be improved, so it is nice to be able to reflect on the amazing things that Penn has to offer,” Krone said.

Major stops along the tour include College Green, the Quad, and Huntsman Hall. Krone speaks about everything ranging from security on campus, to engagement with the broader Philadelphia community, to research opportunities.

Following the Kite and Key campus tour, Krone attends a College Houses & Academic Services focus group at the New College House dining hall. In order for administrators to gain more student input regarding various projects on campus, members of the UA, Student Committee on Undergraduate Education, and Penn’s 6B minority coalition were invited to a lunch to discuss what the College House experience should look like.

At 1 p.m., Krone heads to the Office of Student Affairs on the second floor of Houston Hall. Originally, he headed to the Office of Student Affairs to take part in a meeting with the Committee on Undergraduate Assembly Debates. But the meeting was cancelled at the last minute, so he decided to use the time to unwind, catch up with friends, and take a few phone calls.

Throughout the remainder of the afternoon, Krone returns to Stommons to get some work done and to hold coffee chats for Sphinx, one of the senior societies he is a part of. Sphinx is one of the oldest senior societies on campus, and its members are student leaders on campus. As it is currently recruitment season for senior societies, Krone has the chance to speak with some juniors who were tapped for Sphinx. “The main benefit of [Sphinx] is getting to meet cool people from across campus, whether or not they are actually involved in the organization,” Krone said.

One of the UA's projects this year is in collaboration with the Graduate and Professional Student Assembly, to improve access to menstrual health products across campus. To make some headway, Krone attends a meeting with fellow GAPSA leaders in the Vice Provost of University Life office during the evening to follow up on past discussions and to figure out a path to achieve their ultimate goal.

Not only is Krone participating in UA collaborations with other organizations on campus, but he also helps run internal UA committee meetings. In fact, this Monday was the last Student and Campus Life Committee meeting for the semester, so Krone chose to host the meeting in his apartment. Committee members were able to enjoy ice cream and hamantaschen (a Jewish treat for Purim) while they debriefed on the year.

Krone rounds out the day with rehearsals for the Shabbatones concert from 9 p.m. – 12 a.m. Since it’s the week of the concert, the group is in “Hell Week” rehearsals to refine all of their songs and ensure that they are performance-ready. Krone describes the Shabbatones as “a family that [he is] so lucky to have.”