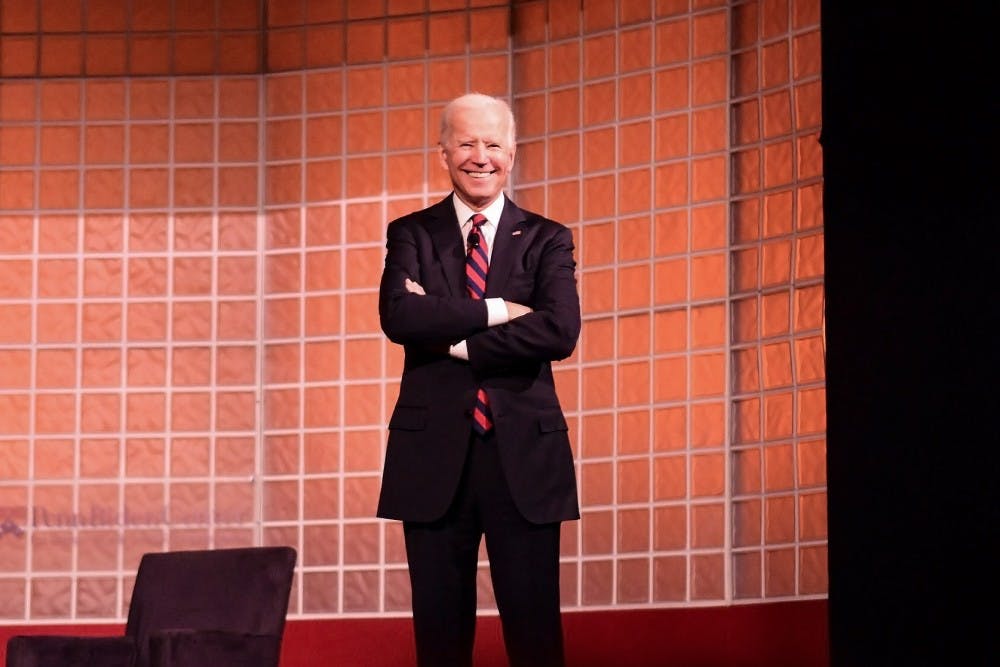 Shortly after former Vice President Joe Biden inadvertently confirmed he would be coming to Penn to work on foreign policy, Biden took part in a panel in the David and Lyn Silfen University Forum at Irvine Auditorium on Feb. 28, 2017. The discussion was focused on the fight to cure cancer, which Penn President Amy Gutmann called a “formidable foe.” Biden and Gutmann were joined by Chief Medical and Scientific Officer of the American Cancer Society Otis Brawley, Director of Clinical Research for the Fred Hutchinson Cancer Research Center Nancy Davidson, Perelman School of Medicine Professor Carl June, who is the Richard W. Vague Professor in Immunotherapy, and Penn Medicine patient and pancreatic cancer survivor Kim Vernick.

A question and answer session between Gutmann and Biden occurred on Mar. 30, 2017. They spoke about topics ranging from international policy to President Donald Trump. The new head of the Penn Biden Center made several jokes throughout the conversation, including calling Gutmann “Madam President” and poking fun at his former boss, former President Barack Obama. The event was held in Irvine Auditorium.

Former President of Mexico Felipe Calderon sat down with the former VP in Irvine Auditorium on Sept. 29, 2017 to discuss their personal relationship and the ties between their countries. When speaking directly to Mexican students, Biden said, “We want you to stay. There are more Mexican Ph.D.s in the United States of America than there are in all of Mexico. And it's one of the reasons why we are so, so very prosperous." The talk followed a private meeting between Calderon and the Mexican students at Penn.

In Biden’s final appearance at Penn in 2017, he talked about his new book, “Promise Me, Dad.” The memoir takes an in-depth look at the loss and grief that Biden experienced during his life, focusing particularly on the death of his son, 1991 College graduate Beau Biden. The event, which took place on Nov. 26 at Irvine Auditorium, featured an interview with Biden conducted by then-Dean of the Annenberg School for Communication Michael X. Delli Carpini. Biden also talked about how the death of his wife and daughter in a car accident in 1972 brought him and his two sons closer together.

On Feb. 15, 2018, Biden made an appearance at the annual David and Lyn Silfen University Forum. The forum took place at Irvine Auditorium where the discussion was centered around immigration policy. Sitting alongside former Florida Governor Jeb Bush and Gutmann, the former Vice President spoke about immigration as a part of American identity and its necessity for economic growth. His policy proposals included recommending that all international Ph.D. students receive a seven-year visa when they finish their degree, stating that there is “no compelling evidence” that immigration has led to economic dislocation in the United States.

Former Vice President Biden arrived on Penn’s campus unannounced on Feb. 28, 2018. His visit was not publicized beforehand, and he arrived at the back entrance of Huntsman Hall to little fanfare. Biden, who is currently the Benjamin Franklin Presidential Practice Professor, delivered a lecture to Wharton graduate students in a highly selective course run by the Lauder Institute’s William Lauder.

On Mar. 29, 2018, Biden engaged in a dialogue with Penn President Amy Gutmann about international affairs, cancer research, and the presidency. Their dialogue began by discussing concerns surrounding gun control and protests in the “March For Our Lives” movement. After speaking about serious political issues with Gutmann, Biden took some light-hearted questions from the audience; one person asked about what he missed the most about his time with his former boss, Barack Obama.

A little more than a month before the 2018 Midterm Elections, former Vice President Biden spent time at a voter registration event hosted by student groups at Bodek Lounge on Sept. 25, 2018. While there, he spoke about the reputation of the United States in the Trump era and urged students to vote regardless of their political affiliation. Later that same day, the Benjamin Franklin Presidential Practice Professor attended a colloquium at Perry World House with former deputy prime minister of the United Kingdom Nick Clegg at Irvine Auditorium.

On Feb. 19, Biden addressed a sold-out audience and held a conversation with Penn President Amy Gutmann at Irvine Auditorium. The former VP criticized President Donald Trump's policies and touted his experience as Vice President in an impassioned conversation with Gutmann, but notably did not touch on his presidential aspirations as speculation about his candidacy for the 2020 Democratic primary continues.