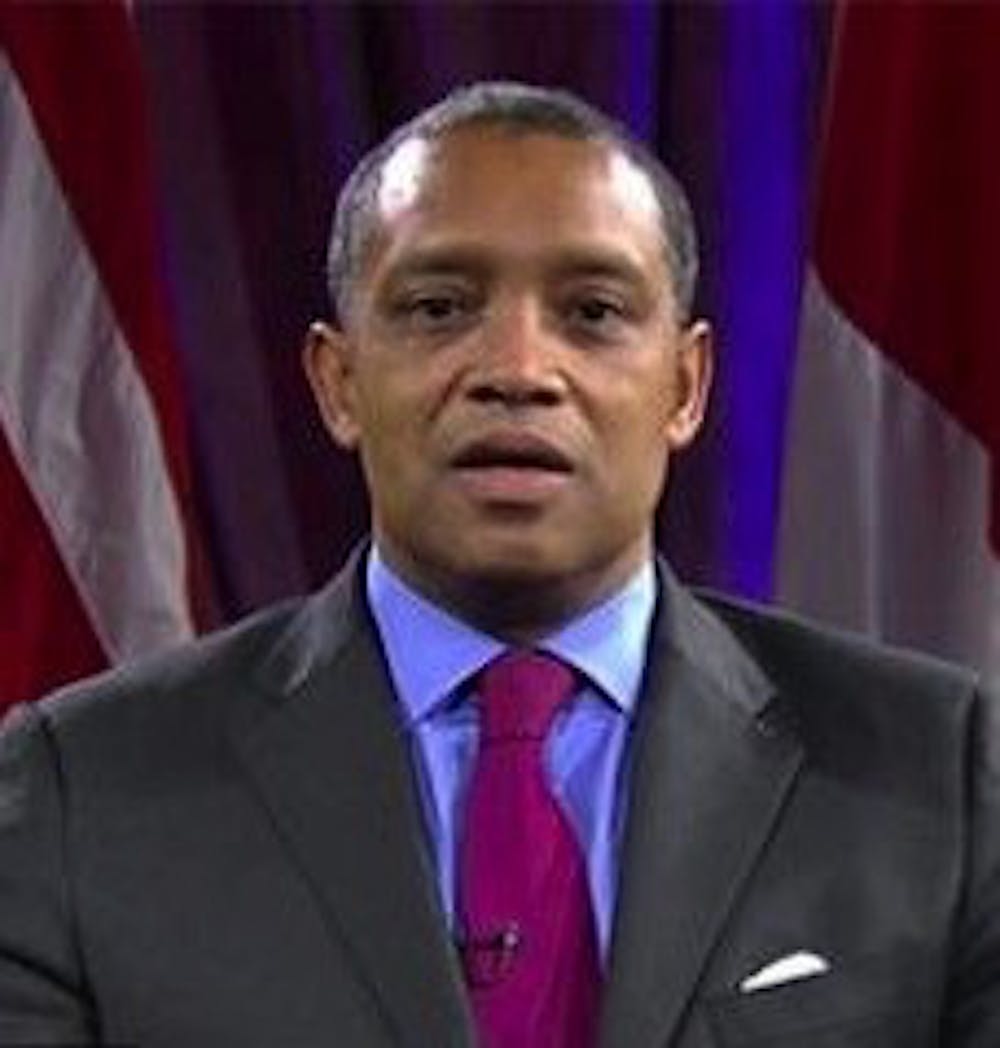 America’s most prominent Penn alumnus is in the national spotlight yet again this week, and this time, he finds himself in direct conflict with another former Quaker.

On Monday, it was publicly announced that current Washington, D.C. Attorney General and 1980s Penn men’s basketball standout Karl Racine is leading a lawsuit against President Donald Trump, alleging that the latter has violated the Constitution by illegally profiting off foreign leaders.

Racine, who graduated from Penn in 1985 as an economics major, is joined in his efforts by Maryland Attorney General Brian Frosh, a fellow Democrat. Together, the pair is arguing that Trump’s decision to maintain his business empire while simultaneously holding the U.S. Presidency “calls into question the rule of law and the integrity of the country’s political system,” courtesy of the Washington Post’s Aaron Davis and Karen Tumulty.

The full details of Racine’s and Frosh’s efforts can be seen in the official lawsuit document, but their core arguments are well laid out in this excerpt from the Washington Post’s release:

"Racine and Frosh accused Trump of 'flagrantly violating' the Constitution’s emoluments clause, which prohibits U.S. officeholders from taking anything of value from foreign leaders. The conflicts created are so vast, Frosh said, that Americans cannot say with certainty whether Trump’s actions on a given day are taken in the best interest of the country or that of his companies."

More specifically, as Davis and Tumulty wrote, Racine’s suit argues that D.C. and Maryland are being harmed because the Trump International Hotel — which has been inhabited by ambassadors from Kuwaiti, Saudi Arabia, Turkey and Georgia in recent months — may be drawing business away from smaller facilities in the region subsidized by taxpayers.

“The Republican-controlled Congress has wholly failed to fulfill its responsibility of serving as a check and balance on the president and has thus given the president a total pass on his business entanglements,” Racine told the Post.

According to the New York Times, Trump is “the first president in 40 years to retain his personal business interests after entering the White House,” and a financial disclosure report by the U.S. government reported that in the early months of his presidency, Trump and his related business entities reported revenue of at least $597 million.

In a Q&A session with the Washington City Paper, Racine went into further detail on his specific motives, citing a desire to prevent the District of Columbia’s residents from financially suffering as a result of Trump’s corruption.

“As far as I know, the hotel is the only business the President has [in Washington D.C.] that he is receiving income from. Businesses are in it to make money, and they relish and embrace competition. When there is unfair competition, or a favorites game being played, they don’t like it,” he said. “If you’re in the hospitality industry, and you have a Four Seasons Hotel, and you have an embassy and a country delegation that made reservations months in advance, only to have them call you and say that they’re not going to go forward with the reservation because they’re opting to go with the Trump Hotel, that’s the kind of real business activity that folks are concerned about.”

According to the Post, legal experts seem to be split on predicting the ultimate outcome of the case, and Racine himself told the Washington City Paper he had no idea how long the case would last.

However, according to Davis and Tumulty, the lawsuit has already been recognized by the Trump administration in “its most detailed response yet,” as the U.S. Justice Department claimed that Trump’s businesses are legally permitted to accept payments from foreign governments because such payments “do not constitute emoluments as defined by the Constitution.”

Though their common roots in University City are rendered moot now, Trump and Racine’s mutual alma mater does add an interesting wrinkle to the rapidly budding conflict.

And while the former’s time on Penn’s campus is notoriously mysterious, the latter’s exploits in Philadelphia have been well-documented, as Racine was one of Penn’s most dominant athletes in the 1980s. Having emigrated to America at age three from Haiti, Racine joined the Red and Blue in 1981 and became an immediate star, being named his team’s Best Defensive Player as a sophomore and then team MVP in both his junior and senior seasons.

A Penn captain in both 1983-84 and 1984-85, Racine earned second team All-Ivy honors in both of those seasons, and he was a crucial component of a pair of Ivy League championship squads in 1982 and 1985. Even now, his name remains in Penn’s record book, as he ranks 10th all-time in program history with 290 career assists.

And after wowing the Philadelphia crowds by dropping dimes on the Palestra floor so many decades ago, Racine’s profession may be entirely different, but one thing hasn’t changed — the former floor general is still dead set on finding ways to assist.

“I want to assure the District residents of the full functioning of the Office of the Attorney General,” he told the Washington City Paper. “And what is it that we do? That is, being progressive juvenile prosecutors, also focusing on public safety, protecting vulnerable citizens, including bringing suits against slumlords, focusing on affordable housing, and also bringing other actions that are in the public interest. All of that work will continue.”