A 1991 Penn graduate is being accused of racism at Evergreen State College. At Penn, he fought against it.

Bret Weinstein, a biology professor, was a whistleblower against a fraternity in 1987 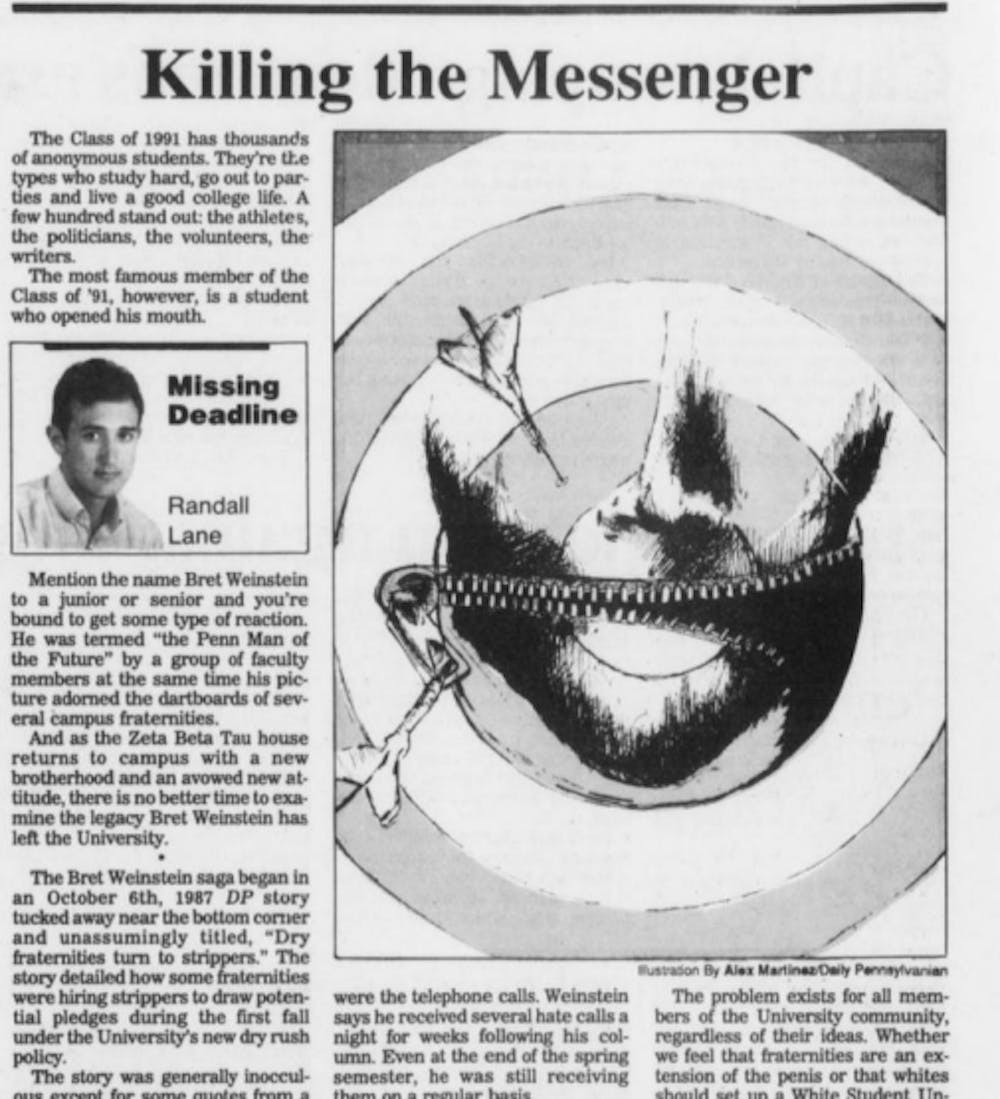 Twenty-nine years ago, a Penn freshman became a target for harassment from his peers after speaking out against racism and sexism in Penn fraternities.

In March, Weinstein objected to changes made to a traditional Evergreen event. Known as the “Day of Absence,” the day has typically been set aside as an opportunity for black students to symbolically leave campus and attend a retreat together.

According to a report in the Evergreen student newspaper, it was suggested this year that white students, who make up about 65 percent of the total student body, leave campus instead.

Gutmann: Racist and anti-Semitic flyers posted across campus are 'vile and reprehensible'

U. of Oklahoma student to be suspended for racist group message after Penn Police, FBI investigation

In an email to an Evergreen State staffer, Weinstein argued that encouraging students of a different skin color to leave constitutes “oppression” and poses grave differences from a voluntary leave of campus, as had been done previously.

The fallout has been extreme: Weinstein was confronted with dozens of protesters in a now-viral video, who accused him of racism and shouted profanities at him.

Nearly 30 years ago, Weinstein was wrapped up in another campus controversy at Penn after he publicly exposed a sexually humiliating incident involving black female strippers at a Zeta Beta Tau fraternity rush event. This time, Weinstein incited a ruckus by calling out racist actions.

After believing the October 1987 event failed to get proper coverage and attention from both students and the administration, Weinstein penned a column in The Daily Pennsylvanian revealing more graphic specifics.

As initially reported by the DP, ZBT held a rush event with strippers, which was not entirely unusual at the time, as fraternities had turned to strippers as a means of entertainment during rush activities in lieu of alcohol, which had been banned from rush events.

Weinstein’s accusations, which included graphic acts performed with ketchup and cucumbers that he later called “a ceremonial rape,” caused a firestorm on campus.

In his op-ed, Weinstein didn’t pull any punches, questioning the purpose of fraternities and describing them as “residential extensions of the penis.” He also explicitly accused Penn of not doing enough to monitor fraternity behavior and attributed that to the large donations that the University received from fraternity alumni.

Fraternity members reportedly treated Weinstein harshly after his public stand. He was harassed over the phone and in person, and received death threats. Weinstein ultimately took a leave of absence from Penn before returning for his sophomore year.

Two years later, as a senior, Weinstein said in another interview with the DP that the price he paid for speaking up was not worth it, and he would “probably not” do it again.

But now, after almost three decades, it seems Weinstein has done just that, becoming the center of a campus and national debate on racism and free speech.

Now, like before, the threat of harassment is real for Weinstein. Police have suggested that he avoid campus for his own safety. The Evergreen campus has been shut down twice in the past six days after anonymous individuals threatened to “execute as many people on that campus as I can get a hold of,” according to the Washington Post.

Correction: A previous version of this article stated that Bret Weinstein, a professor at Evergreen State College, provided an email for the school newspaper to print. Weinstein did not proactively provide the email. The DP regrets the error.