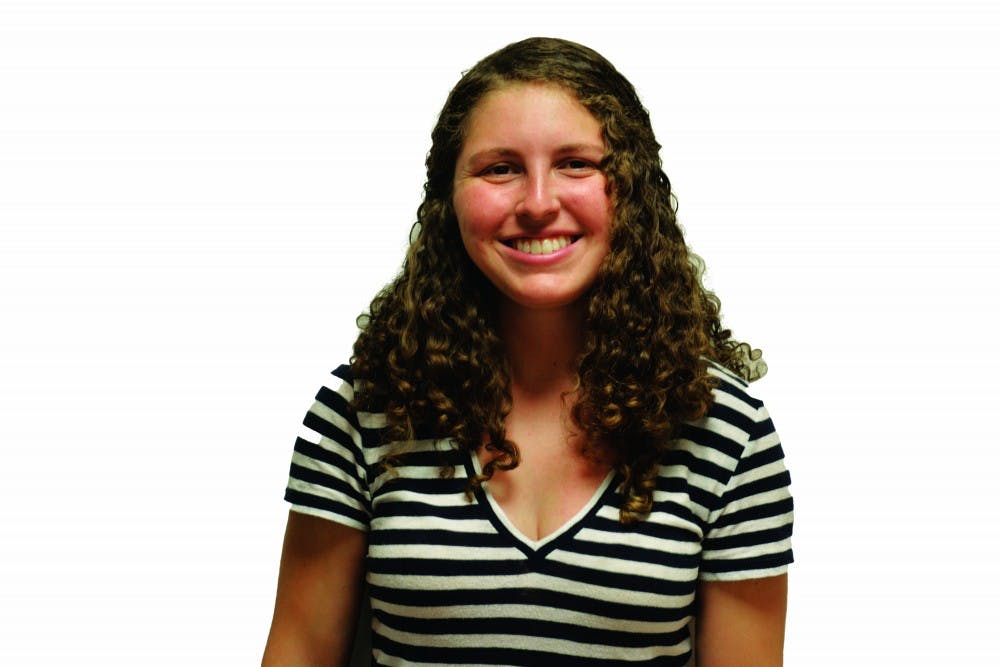 When I first arrived at Penn, I had decided that the newspaper world was no longer for me. After finishing up a career as a high school journalist, I thought it was time to call it quits and find another calling.

But reluctantly, my friends from my Media and Communications residential program dragged me to that very first Daily Pennsylvanian info session.

Here I am, three boards later. And I’ve got the bags under my eyes to prove it.

I love The Daily Pennsylvanian. There, I’ve said it. I may deny it now that I know the sweet taste of freedom, what an evening is like when not spent in a windowless office from 5 p.m. until at least midnight. But I venture to say that the very best times of my Penn career have happened within the pink and white walls of 4015 Walnut Street.

Three boards are not common at The Daily Pennsylvanian. I started as a freshman design trainee. I had never used Adobe Creative Suite in my life, and I still remember the first infographic I made in that first training session — a mix of colors that didn’t match and probably an offensive font or two.

By the end of my first semester of freshman year, I was craving a close group of friends and a sense of belonging. I decided to run for Weekly Pennsylvanian editor and got the job. And so began my DP journey on the 128.

Craving a bigger commitment, I became an online graphics editor and news design editor on the next board, the 129.

As news design editor and as a graphics editor, I learned the importance of accuracy, and that even on the days where it feels like no one reads the paper, it is important to get all the facts right. I learned how hard the News department works on a daily basis and how many phone calls the news editors and reporters must make a day to people who simply don’t want to talk to them. I learned that homework and rehearsals took back seats to the paper. I wanted to do the absolute best I could for The Daily Pennsylvanian, even if I knew no one clicked on my flash graphics, because I cared so much about the work we were doing and the stories we were telling.

The next year I planned to go abroad, but my plans fell through. Panicked about what I would possibly do that next year without the DP in my life, I ran for one of the only jobs still available: sports photo editor. I had never held a camera in my life, nor had I gone to many Penn athletics games. But, alas, I embarked an even numbered board because I saw no other way to spend my college career without The Daily Pennsylvanian.

That year I learned how much better I was at being a design editor. I learned how to work with tempers and people who might not be thrilled to be working with you. I learned how cool and artistic and crazy The Daily Pennsylvanian’s photographers are and how much they care about their photos. I learned (well, at least tried to learn) how to keep my cool when combatting major structural changes. And I learned how to take really cool action shots at basketball games.

My favorite memories at the DP have been those nights playing Heads Up while waiting for a photographer to ingest their photos, DP Thanksgivings, staying up until four in the morning to finish the most complicated flash graphic quiz I’ve ever made for 34th Street, collaborating with the 129’s Blue Room to cover an important issue, working with Jenny Lu #2 to put together a back page, Don Memos BYOs, GrubHubbing everything and DP Dining excursions.

My time at the DP has given me plenty to be thankful for, most specifically:

To the 128: You instilled within me a passion for great journalism and a love of The Daily Pennsylvanian.

To the 129: It’s true, odd boards are the best boards. I know I shouldn’t play favorites, but that year was magic and I’ve learned so much that I still carry with me in all I do today.

To the 130: You challenged me in the most necessary of ways.

To my parents who subscribed, and still subscribe, to the Weekly Pennsylvanian even though yes, you can read the entire DP online. To Huizhong — we have come a long way since Voices. To Will, who has been there with me since the 128. To Jenny Lu #1 for being the best out-of-the-office DP friend a girl could have, and Jenny Lu #2 for being the best in-office friend. To Hailey, my forever partner inDesign crime. To Yolanda and Connie and the Melons, for tolerating all the Facebook hacks and for your constant support. To those who have been with me for the late night conversations standing outside the DP when you don’t go home until two hours after the paper is sent because all you want to do is just share each other’s company.

Thank you to those who will continue this tradition long after I have left this school, both the content creators and media consumers. I look forward to seeing how my favorite (almost) daily paper will change and grow in the years to come.

Lastly, thank you to The Daily Pennsylvanian. Without those three years and three boards, and I do mean ALL of them, my time at Penn would have been missing its most significant part.

MICHELE OZER is a College senior from Philadelphia. She is a former design and sports photo editor for The Daily Pennsylvanian. Her email address is micheleozer@gmail.com.