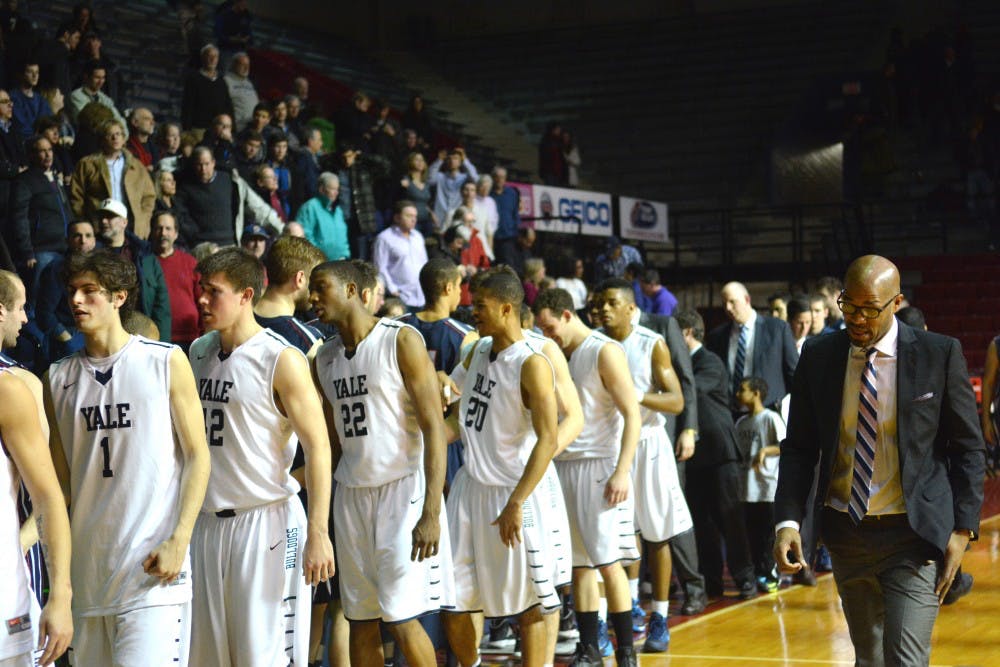 Midway through the second half on Saturday night, Yale sophomore forward Justin Sears caught the ball on the block, turned and found himself backing down Penn senior captain Fran Dougherty.

Sears, one of the leading candidates for Ivy League Player of the Year, made one move, turned over his shoulder and elevated. The Plainfield, N.J., native slammed the ball through the basket over Dougherty’s outstretched arms and let out a roar for the entire Palestra crowd to hear.

Clearly, not much has changed since the Quakers and Yale last did battle up in New Haven two weekends ago, a game in which Sears went for 25 points and seven rebounds.

Despite a spirited effort to kick off Saturday night’s game, Penn simply could not stop Sears or any other part of the Bulldogs’ balanced attack. Though the Quakers came out and played with energy on Senior Night, coach Jerome Allen’s squad fell, 70-63.

Entering Saturday, the Red and Blue (7-18, 4-7 Ivy) hoped to not only honor their five seniors, but also provide them with a victory in the final home game of their careers. Unfortunately, Sears and company had other ideas.

“I’m more athletic than [Penn’s] big guys, and Penn and Harvard are the only two teams that don’t double me,” Sears said. “It’s good when I play Penn because I get the chance to go one-on-one with a lot of guys.”

Following a debacle against Brown on Friday, the Quakers came out firing on all cylinders to start the matchup with Yale (15-11, 9-3).

Miles Jackson-Cartwright asserted himself from the get-go, scoring eight of Penn’s first 12 points. The senior guard led the Red and Blue in scoring on the night, finishing with 20 points.

“I thought we played together and played hard, and that’s what we expect, especially from [the seniors],” Jackson-Cartwright said. “It was a great start, especially after everything that preceded the game.”

Yale eventually was able to play physical basketball and dictate the pace of play. The Bulldogs ended up pulling in 11 more rebounds than Penn and notched 17 offensive boards.

“I thought [Yale’s physical play] was huge,” Allen said. “We said before the game, ‘How are we going to match their physicality and intensity?’ Clearly we didn’t do that tonight.”

Despite trailing 33-27 at the break, Penn remained within striking distance in the second half, largely due to the play of Jackson-Cartwright and sophomores Darien Nelson-Henry and Tony Hicks. Nelson-Henry and Hicks combined for 30 points, with most of that total coming after halftime.

The Quakers got within three points multiple times but were unable to get any closer until Hicks sank a three with 23 seconds remaining, a shot that narrowed Penn’s deficit to just two.

But clutch free throw shooting from Yale junior guard Javier Duren pushed the Bulldogs’ lead to four, and an untimely turnover from Hicks on the next possession sealed Penn’s fate.

Penn was able to keep it close when Sears, who finished with 24 points, went to the bench for a breather midway through the second frame. Ultimately, however, it was not enough to generate a win for the Red and Blue’s senior class.

“We’ve been through a lot together,” Allen said. “I obviously wish we could have won more games, but as human beings, they have great character and they never take a day off. I respect them for giving us what they could.”

This weekend’s Ivy doubleheader not only marks the third time Penn was swept during its weekend slate in 2013-14, but the first time in program history that the Quakers were swept at home by both Brown and Yale.

Penn will return to action next weekend on the road against Columbia on Friday night before heading to Ithaca, N.Y., to take on Cornell the following evening.